The Indianapolis Colts will advance to the divisional round of the playoffs after scoring an upset over the Kansas City Chiefs on Saturday.

The Indianapolis Colts knocked off the Kansas City Chiefs 45-44 Saturday evening, moving into the divisional round of the 2014 NFL playoffs. It was a hard-fought game, with the Colts recovering from a 28-point deficit to record the second-largest comeback in NFL playoff history. 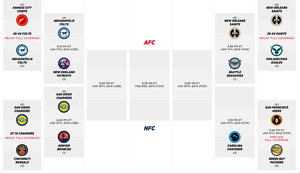 Chuck Pagano's squad now awaits the outcome of the San Diego Chargers vs. Cincinnati Bengals game on Sunday afternoon. That game will determine whether they face the Denver Broncos or New England Patriots, who both earned first-round byes this week. Matchups in the second round are dictated by seeding -- the top-seeded Broncos get the privilege of playing the lowest-seeded team to emerge from the wild card round. The No. 2 Patriots will take the other.

If the No. 3 Bengals win, the No. 4 Colts will head to Denver to take on Peyton Manning. If the No. 6 Chargers win, the Colts are off to Foxboro to face Tom Brady and the Pats.

The New Orleans Saints and Philadelphia Eagles kick off the NFC side of things at 8:10 p.m. ET Saturday. They'll then wait for the San Francisco 49ers and Green Bay Packers to round out the weekend on Sunday evening. The following week will either be New Orleans versus the Seattle Seahawks or Philadelphia against the Carolina Panthers.

You can find a bracket at SB Nation's hub for NFL playoff coverage here.