2014 NFL playoff bracket and schedule: The picture heading into Sunday

The 2014 playoff bracket is slightly more defined after the Saints' win on Saturday, but much is still contingent on Sunday's results. Here's the bracket thus far.

Share All sharing options for: 2014 NFL playoff bracket and schedule: The picture heading into Sunday

Saturday night didn't provide the offensive shootout that it promised. However, Drew Brees overcame early interceptions to lead the New Orleans Saints when it mattered and the team secured a vital playoff win on a field goal as time expired. The victory ensures that New Orleans stays alive in the playoffs, and that they'll have another set of weather-related narratives to battle in the divisional playoff round.

The next trip for the Saints will be brutal, as they'll head to CenturyLink Field for another shot at the Seattle Seahawks. The Saints lost in Seattle in the Wild Card round three years ago.

In Saturday's other game, the Indianapolis Colts came back from a 28-point deficit to stun the Kansas City Chiefs.

Here's a look at the NFL Playoffs schedule and bracket heading into Sunday:

The Bengals are healthy favorites against the Chargers. San Diego reached the playoffs after barely scraping by the Kansas City Chiefs in Week 17, aided by the fact that the Chiefs were resting all of their starters. Still, the Chargers sport several quality wins on their resume and have the superior quarterback on their side. Philip Rivers underwent something of a renaissance this season, finishing with the third-best passer rating in the league.

The Packers needed a thrilling win over the Chicago Bears to make the playoffs, whereas the 49ers were a strong team throughout the regular season. The Packers won their division, though, so they will have the advantage of playing host to the 49ers for what will be a frigid evening in Green Bay.

The Patriots await the results of Chargers-Bengals to find out who they will play next Saturday. They face the highest remaining seed in the AFC following this weekend, which will be the No. 3 Bengals if they win. Should the Chargers pull off the upset, then the No. 4 Colts will head to Foxborough to face Tom Brady and company. 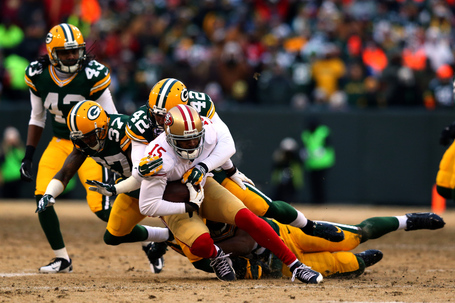 Like the Patriots, the Broncos won't know their next opponent until Chargers-Bengals is final. They will take on the lowest remaining seed in the AFC, which will be the Chargers if they upset the Bengals, or the Colts if the Bengals win. Interestingly, they will be taking on a team they have already played this season no matter Sunday's outcome; they split two games against the Chargers and lost their only matchup with the Colts.

As a result of the Saints' upset win over the Philadelphia Eagles in Philly, they will advance to face the Seattle Seahawks. The Saints hope to have overcome their road bugaboos with the win. The last time they faced the Seahawks, Drew Brees was held to 147 yards passing and the Saints lost, 34-7, in Seattle.

As the No. 2 seed in the NFC, the Panthers will face the highest remaining seed in the conference, which will be the winner of Sunday's game between the Packers and the 49ers after the No. 3-seed Eagles were upset by the Saints on Saturday. Either team presents a fun matchup for Ron Rivera's vaunted defense. If the 49ers win, fans will be treated to a rematch of November's 10-9 slugfest in San Francisco.

It sort of feels like any of the remaining AFC teams could wind up in this game, doesn't it? None of the teams hosting games enjoys a home-field advantage like the Seahawks in the NFC. The conference championship race is wide open.

A Seattle-hosted conference championship game could be a nightmare for their opponent if the Seahawks make their way this deep into the playoffs. They are the favorites for good reason, but whoever advances out of the NFC's motley crew of teams would give the Seahawks a fascinating fight ... assuming Seattle advances, of course.

The Super Bowl will be played at MetLife Stadium in East Rutherford, N.J. The game will be televised by Fox with Joe Buck and Troy Aikman handling the broadcast. Bruno Mars will provide the halftime entertainment.