No Jamaal Charles? No problem. Alex Smith is lighting up the Colts despite the absence of his All-Pro running back due to an early concussion. The Chiefs lead the Colts, 31-10, at halftime.

The Kansas City Chiefs lost Jamaal Charles early in the first quarter, but Alex Smith had no problem picking up the slack. The Chiefs lead the Indianapolis Colts, 31-10, at halftime behind three touchdown passes from Smith.

The Chiefs suffered the serious blow early in the game, when Charles took what first looked like an innocuous hit on the opening drive. But his head went down hard to the turf and it was announced that he will miss the rest of the game with a concussion. The setback didn't stop the Chiefs from driving inside the Colts' 10-yard line in 14 plays. From the 6-yard line, Smith found Dwayne Bowe over the middle ...

The Colts responded quickly, however. Andrew Luck went 7-for-7 passing to drive the Colts 77 yards to tie the game on Indy's first possession. The easy touchdown seemed to foretell a shootout, but the Chiefs went on to dominate the rest of the half.

Smith, with the help of Bowe and Donnie Avery, torched the Colts' secondary. A 63-yard near-touchdown reception by Bowe set up a go-ahead field goal. A 79-yard touchdown bomb (the longest of Smith's career) to a wide-open Avery on the Chiefs' next possession put Kansas City in position to blow the game open, up 17-7. Then Trent Richardson fumbled the ball away in the second quarter on his first carry of the game. KC capitalized, finishing a 17-yard drive with a shovel pass to the end zone for Anthony Sherman to take a 24-7 lead early in the second quarter. A shot of the thread-the-needle shovel that Smith pulled off: 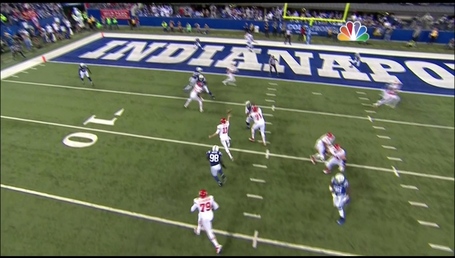 A promising Colts drive stalled in the red zone, forcing Indianapolis to settle for a field goal. The Chiefs' offense, meanwhile, kept rolling. Using a healthy mix of screens and short passes, the Chiefs found the end zone again off the Colts' scoring drive. The Chiefs went 4-for-4 converting third downs on the drive, pushing them to 6-for-7 for the half.

Knile Davis capped the drive with a 4-yard plunge into the end zone. Davis has 12 carries for 51 yards so far in place of Charles.

After that perfect start to the game, Luck is now just 12-for-21 passing for 129 yards. He threw an interception inside Kansas City territory late in the half, ending an opportunity to chip away at the Colts' deficit.

Through 30 minutes, the Chiefs are well on their way to advancing to the Divisional Round of the playoffs. Luck has a reputation for pulling the Colts out of deep holes, but he may be facing one of the stiffest challenges yet of his career, down 21 points at intermission.