The New England Patriots and defensive mastermind Bill Belichick have the kind of secondary that can take them deep into the playoffs. We'll get a real look at what they can do this weekend against the Packers.

Share All sharing options for: The perfect Patriots secondary for Bill Belichick

Bill Belichick has always been an excellent Xs and Os coach on defenss, but he's a bad mutha when he also has some high-level Jimmies and Joes to actually execute his game plans. I imagine before installing last week's defensive game plan for the Lions "Bad Mutha Bill" looked over his defensive depth chart, which of course boasts new "Jimmy" cornerback Darrelle Revis as well as new "Joe" cornerback Brandon Browner, and said to himself, "we're going to go real basic and make them beat us head up."

His plan against the Lions last week hints at what he'll do against the Packers this week, and it might be enough to take the Patriots deep into the postseason.

Belichick matched Revis up on Lions receiver Golden Tate man-to-man. He matched Brandon Browner up on Calvin Johnson at the line and had him beat up Megatron all over the field and jump any short routes. He had one safety, Devin McCourty, playing over the top of Johnson which is how Browner was freed up to sit so heavy on Johnson's routes. Belichick put the other safety (usually Patrick Chung ) or sometimes a nickel corner (Logan Ryan or Kyle Arrington) down in the box or out wide man-to-man on the No. 3 receiver or the tight end. There was one linebacker man-to-man on the back, and another linebacker looking to help on crossing routes.

And it worked to near perfection.

They didn't run this coverage every single play. A few times when they had the Lions in a third-and-long situation, they went to Cover 3. But it was definitely the lead coverage for most of the game when the result was still in doubt. So why was it so effective?

I know some Lions fans are probably piping in at this point blaming their offensive coordinator, Joe Lombardi, for his ineffective game plan -- and they aren't all wrong really. I'll get to that, after I point out why things went down the way they did from the defensive perspective.

Revis was the perfect guy to match up on Tate because he's so good at covering quick, shifty receivers. In case there was any doubt, the old Revis is back now. I studied Revis extensively when he was traded down here to the Tampa Bay Buccaneers in 2013 to see what made him so effective his first few seasons in the league. One thing that stood out is he never appeared to be afraid to get beat deep. When he went bump-and-run, he almost always sat down on the receiver as if he was looking for him to run a short route. That's a bold stance for most corners because if a receiver gets them with a double move, they usually can't recover on a deep route. Revis, on the other hand, was almost always able to make up the distance by the time the ball got down field.

Revis also has this uncanny ability to mirror receivers off the line while jamming them. Most guys have a hard enough time going backward and forward without tripping over their feet, but Revis is actually proficient in backpedaling and breaking up on the ball, as well as going side-to-side while pressing the receiver at the line. That meant he never really had to open up his hips and run with the receiver. It also meant he was nearly always able to stay over the top of the receiver during the route, and in good position to break on the pass if it happened to come his way. That takes an unreal amount of quickness and and ridiculous reflexes, which is why most corners can't do what he does.

Those attributes are what were lacking from Revis' time in Tampa, coming off an ACL reconstruction. You could tell he didn't trust his speed and quickness last season. That meant he had to play corner like most mere mortals, which was responsible for his relative lack of big plays. Early this season, I could see watching film that he was starting to trust his knee more, but he still wasn't all the way back. Every once in awhile, he would still react a little bit slower than he used to on certain routes. Some passes you normally would've expected him to either deflect or pick off ended up making it to their intended target. That was earlier in the season, though.

Based on the film from the game against the Lions? The real Darrelle Revis has returned.

He gave Tate fits all over the field, smothering the hell out of him like a straight jacket. About the only time he was able to get away from Revis was on a rub play where the outside receiver ran a pick and Tate caught a wheel route up the sideline. Other than that, Revis was in his back pocket all damn game.

What let me really know Revis was all the way back was the outstanding play he made on a crossing route Tate ran early in the game. It's hard to play a crossing route with outside technique because you are starting off in a trail position from the jump. That is why you see so many guys get flags thrown on them when trying to playing man-to-man on a crossing route and trying to make a play on the ball. They are almost always behind the receiver, so they grab him and try to pull themselves through to try to get a hand on the ball. Guys like Revis are fast enough to stay on the receivers hip and then undercut the route to make a play on the ball just as he did with 11:54 left in the first quarter with the Lions trying to convert on third and six. Not only did Revis make a play on the ball, he damn near intercepted it. Don't try that at home, kids. 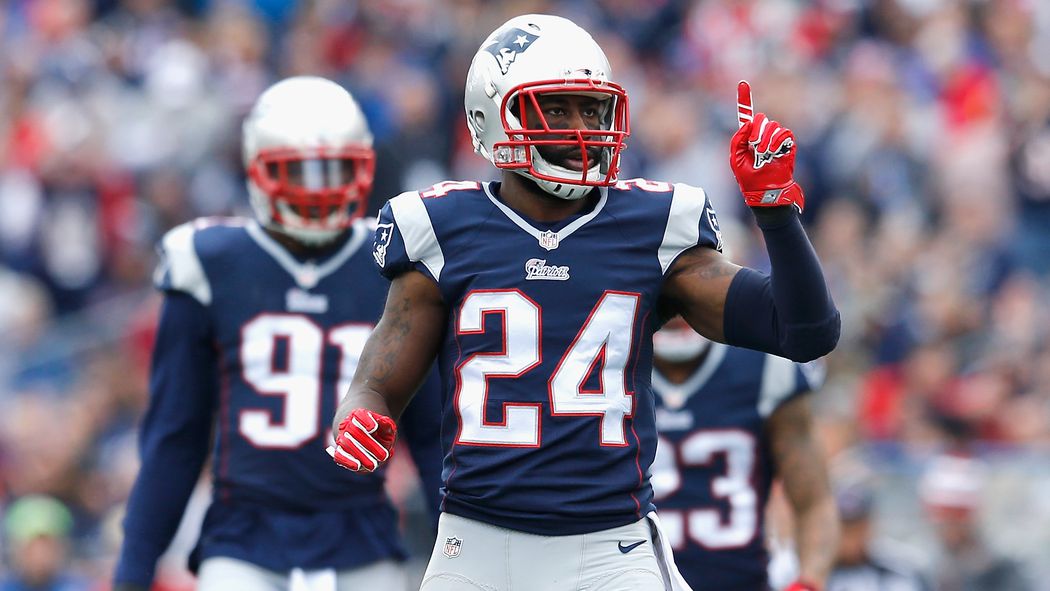 Browner is a totally different animal. Matter of fact, "animal" is an appropriate description of what Browner is when he plays cornerback. All he wants in life is to jam the hell out of an opposing receiver and just keep stabbing them in the chest with his hands until they give up. A big corner at 6'4 and 220 pounds, he was also the perfect physical matchup for the 6'5, 236-pound Johnson. Browner had no problem jamming Johnson at the line and then just riding him down the field. With McCourty sitting over the top for any deep balls and ready to break up any crossing routes, all Browner really had to do was try to stay in the passing lane between Johnson and Stafford so as to dissuade Stafford from even trying him. Because Stafford is more risk adverse this year the strategy worked, and he only completed four of the 11 passes he threw to Johnson.

Of course, new toys are nice and all, but one of the holdover Jimmies and Joes who also helped this coverage work so well was linebacker Jamie Collins. The guy is so damn athletic it should be against the law. Matching him up with a tight end or running back was actually a favorable situation for the Patriots. With the outside receivers on lockdown, it would make sense for Stafford to look to his tight ends and backs to take up the slack, but they couldn't get much separation, either.

I will say this coverage did have one potential flaw in it, from my perspective, and that was the fact the safety or nickel corner who matched up out wide on the No. 3 receiver rarely had any safety help over the top. Ryan and Arrington ended up on an island all by themselves much more than Revis and Browner did during the game. The problem for the Lions is they couldn't quite figure out how to exploit that potential weakness. That is where the failure of Lombardi's game plan and lack of successful in-game adjustments enters the conversation.

The Lions tried to throw a few deep balls to receiver Jeremy Ross, and they tried to hit rookie tight end Eric Ebron deep up the seam a few times. However, those efforts didn't end up being very fruitful. Both of those guys played like they had feet for hands most of the game and kept dropping potential big plays. Another backup wide receiver, Corey Fuller, can run like the wind, but he had a touchdown go through his hands in the end zone. It wouldn't have been an easy catch, but it was a ball he should have caught.

I can only surmise that Lombardi and the rest of the staff couldn't figure out any better ways to try to exploit the matchup. Because those guys kept dropping passes, the coaches decided to just go back to trying to find ways to get Johnson and Tate open, and that was a crucial mistake.

Had they kept going after Ryan and Arrington, eventually Ross, Fuller or Ebron would have likely made a few catches. Maybe they would've even gotten hot enough to get Belichick to back off of his coverage. What I know for sure is the conventional stuff wasn't working, so continuing to call those route combinations was the height of insanity.

I will say while Belichick's coverage scheme was pretty simple, he did bring some exotic pressures with the front seven. Having the back end in a choke hold allowed the mad genius to get back to coming up with all different kinds of personnel groupings and blitz schemes to maximize both the talent on the roster and the ability to get pressure on the quarterback. On one play there were technically only two defensive linemen, Vince Wilfork and backup defensive end Zach Moore. The latter lined up outside in a two-point stance like an outside linebacker. At the time there were five other linebackers on the field, including the newly acquired Jonathan Casillas. Now just imagine trying to figure out who the Mike is out of all those bodies. Good luck with that!

A few weeks back before the Patriots played the Broncos, I noted the Patriots' secondary now boasts a plethora of different coverage options which allows them the ability to match up with almost any team's wide receivers. They validated everything I said about their potential in that game defending the pass, even with big yardage totals by two Broncos receivers. Neither one of those guys could get free to score a touchdown when it counted. That Broncos' offense is going to get yards, but the name of the game is having more points than your opponent by the end of the game.

The Patriots' performance against a high-powered Lions' offense was more validation. The more games they can string together defensively like these last few, the more inclined I am to see the Patriots as Super Bowl favorites. This week's game against the Packers will put them to the test.

It has been a long time since Belichick had this kind of talent on defense, probably not since those previous Super Bowl-winning teams in the early 2000s. Yeah, Tom Brady and the offense is looking awesome right now, too, but if the Patriots go on to win the championship, I can almost guarantee you it will be at least as much because of the defense doing more than its part. Bill "Bad Mutha" Belichick finally has enough top-notch chess pieces to show just how much of a defensive mastermind he truly is.

Everybody else should be afraid, very, very afraid.