There's something different about Tony Romo and the Cowboys

Dallas has moved beyond its December swoons and is galloping toward the playoffs. Their success on the field starts in the locker room, where Tony Romo has done something few NFL quarterbacks can claim.

Share All sharing options for: There's something different about Tony Romo and the Cowboys

PHILADELPHIA - A father placed his hands squarely on the cheeks of his son on Sunday night deep inside the tunnels of Lincoln Financial Field. A look of marvel directly into each others' eyes was clear. The father kissed his son's cheek. They whispered enchanting words. A final embrace. A departure with arms still stretched toward each other.

As Tony Romo then walked inside a metal barrier to clear final security before boarding the Dallas Cowboys team bus, he was misty-eyed. He was asked, "Who was that?"

A father, a son, in one of the most profound and sincere moments of pure affection and appreciation that I have ever seen in covering nearly 32 NFL seasons. Ramiro Romo giving Antonio Ramiro "Tony" Romo just what he deserved. Just what he needed.

For 10 NFL seasons he has been brutally gashed by critics for his mistakes. But he has also been lifted up as a model passer when he gets it right.

He is doing more of the latter this season. And there is something even better about Romo.

It is not just his play.

Across the Dallas locker room, from his teammates, there is an affection and appreciation for him that is rare for any NFL quarterback. It was unmistakable on Sunday night after Dallas toppled the Philadelphia Eagles 38-27 to vault into first place in the NFC East and inch closer to its first playoff appearance in five seasons.

Romo has his hands and his heart all over that locker room.

They are giving it back to him in a special way. 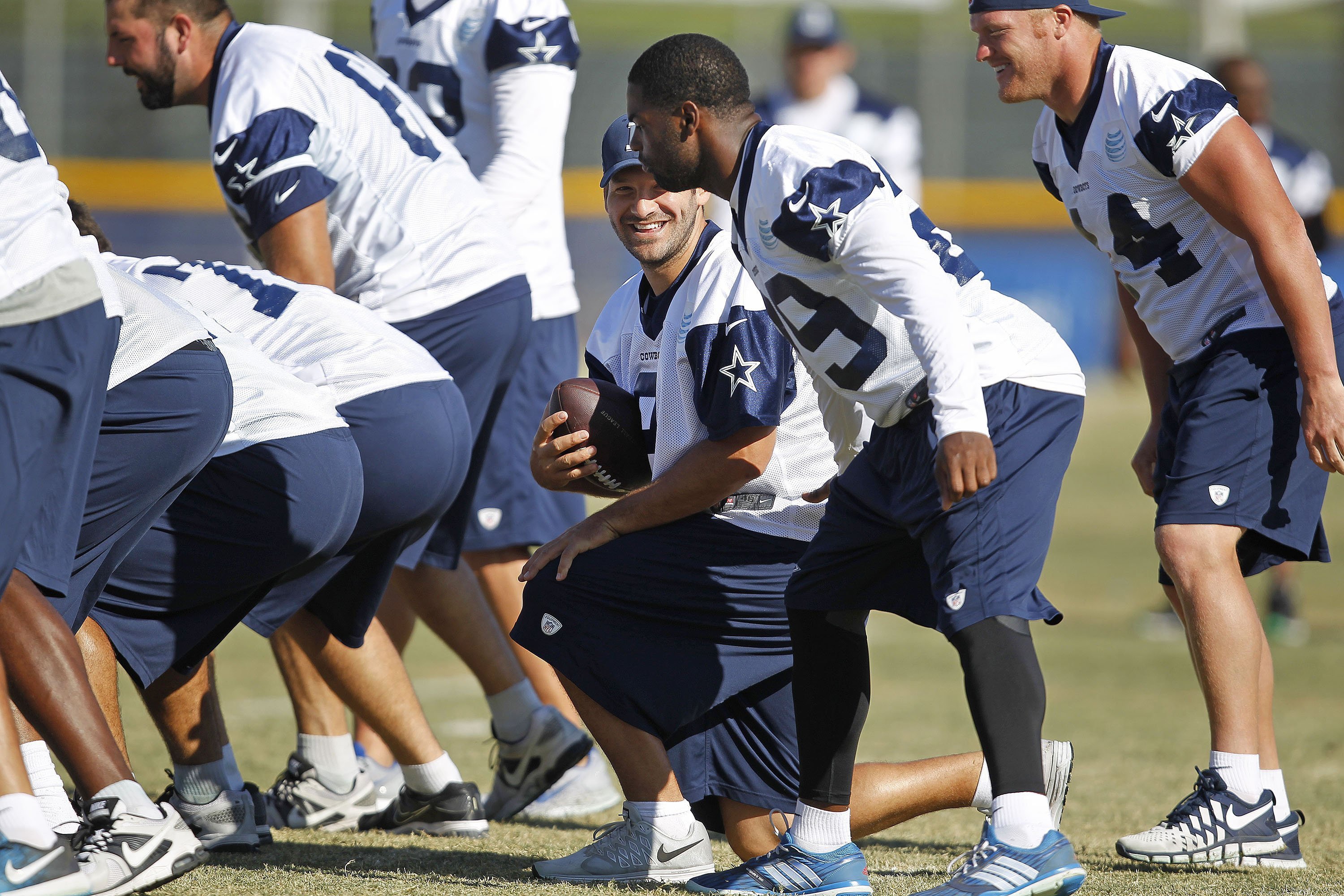 It is an extraordinary phenomenon.

There are only two quarterbacks I have seen who commanded this type of presence and established this kind of relationship from every close nook and every far-reaching cranny of their locker room. Joe Montana comes to mind. He was so good at his craft that his teammates stood in total awe of him - but he also treated them with humility. Warren Moon certainly fits. In his locker room during his playing days, his teammates trusted and adored him and he communicated with them with gratitude.

This is an unmistakable dynamic when it lives.

You cannot buy it. You cannot force it. Trust. Appreciation. Love.

What does it mean? How does it translate?

I see a team that has rallied behind him, a group of offensive players who show up when their number is called. I see a quarterback who is confident and at peace now, who is guiding and nudging this group. I see execution and unity. Talent translating into performance.

He is completing nearly 70 percent of his passes. He has thrown 28 touchdown tosses compared to eight interceptions. He is the only quarterback in NFL history to string together four straight road games with at least three touchdown passes and no interceptions. His team is 7-0 in road games this year and in them he has tossed 18 touchdowns and only one interception. He is adeptly exploiting matchups. He is throwing with perfect touch and then with fire. He is evading pass rushers and throwing piercing passes on the run.

Stars align for the Cowboys

The Cowboys have finally broken free from their 8-8 ways, thanks to big seasons from their superstar foursome -- Tony Romo, Dez Bryant, DeMarco Murray and Jason Witten. With a crucial win Sunday over the Eagles, the only question now is how far they can take Dallas.

Jeremy Mincey, the unsung hero of the Cowboys' win

The Cowboys kept the Eagles' offense in check to win their most important game of the year so far. Jeremy Mincey's two sacks were a big part of that. He's taking home Stephen White's Hoss of the Week award for his effort.

Stars align for the Cowboys Jeremy Mincey, the unsung hero of the Cowboys' win

Victories in their last two games -- home against the Indianapolis Colts on Sunday and then at Washington -- would ensure the Cowboys are divisional champs and playoff bound.

And give Romo the opportunity to gain his first Super Bowl appearance.

He is 34. What a journey. Undrafted in 2003 from Eastern Illinois University. A free agent signee with Dallas who in his first three seasons sat behind Drew Bledsoe and Quincy Carter and Chad Hutchinson. There was the 2007 wildcard playoff game at Seattle where he botched the snap on a potential 19-yard game-winning field goal, ran it, was crumpled and fell short. There was the 2008 playoff game against the New York Giants where he threw that late pick to cornerback R.W. McQuarters that killed everything.

He had become the face of the Dallas December swoons and January collapses. Many people concluded he was just not suited for big games and big moments.

Things look differently now. They feel different. He has a robust offensive line. He has a spectacular running back in DeMarco Murray. He has difference-making pass connections with receiver Dez Bryant and tight end Jason Witten.

He has played through back pain and other injuries this season. For 10 years he has navigated the high-flung, hands-on management of owner Jerry Jones. He has forged a relationship with head coach Jason Garrett and offensive coordinator Scott Linehan that is clicking.

But what Tony Romo has possibly done best is cement the culture in the Dallas locker room.

By being available, by being real, by reaching out and connecting to all players across his locker room, by exhibiting his toughness juxtaposed with his vulnerability, he has helped create an all-in affair.

Tony Romo has become the essence of leadership. One relationship in that Dallas locker room at a time.

His hands and his head are all in it. And so is his heart.

The great thing for Dallas is that his teammates are following him step for step. They clearly appreciate the quarterback. They have bought in on the man even more.