Michael Bennett and Russell Wilson are playing fearless football, and the Seahawks are rolling as a result.

I freaking love watching Michael Bennett play the game of football. Maybe almost as much as watching J.J. Watt, if not more, to be honest. I guess some of it is because Bennett isn't close to being as big as Watt or as naturally gifted, but it's almost as if nobody bothered to tell him that. He lines up all over the defensive line and comes off the ball with the kind of reckless abandon usually limited to the old school kamikaze special teams demons who used to blow up the wedge and love every second of it. Watching Bennett ferociously take on blockers, no matter how big or tall, you get the distinct impression that the dude thinks he's 10-feet tall.

Had there been a logical way I could have awarded him the Hoss of the Week this week, I damn sure would have done it. He didn't have any sacks against the division rival 49ers, but when you watch the Seahawks play defense in that game, it is obvious that he is that guy up front. The straw that stirs the drink. The edge, if you will, of a defense that always seems to have a chip on its shoulder. But it's not just his effort that's admirable about his game, nor his just his fearlessness.

Bennett is also one of the most skilled defensive linemen with his hands that I have seen in recent memory. When I say "with his hands," I mean the way he is able to come off the ball inside at defensive tackle, get his hands on the guard, get full extension of his arms, and push that guard into the backfield even though he probably outweighs Bennett by about 50 pounds. There's also his ability to knock an offensive lineman's hands off of him when he is pass rushing; that takes a lot of anticipation, timing, and nerve. Nerve, because if you miss those hands, you are probably going to get punched into next week and get embarrassed the next day watching film with the team. I can't say that Bennett is the Honey Badger, because we already have one of those, but he damn sure doesn't care either.

And you can see on film Bennett's teammates feeding off of his intensity play after play after play. By the end of the game, I swear it looked like a damn teal swarm out there jacking folks up when the Seahawks were on defense against the 49ers. I don't want to give Bennett credit for everybody's great effort, but I will say most of them were just following his lead. 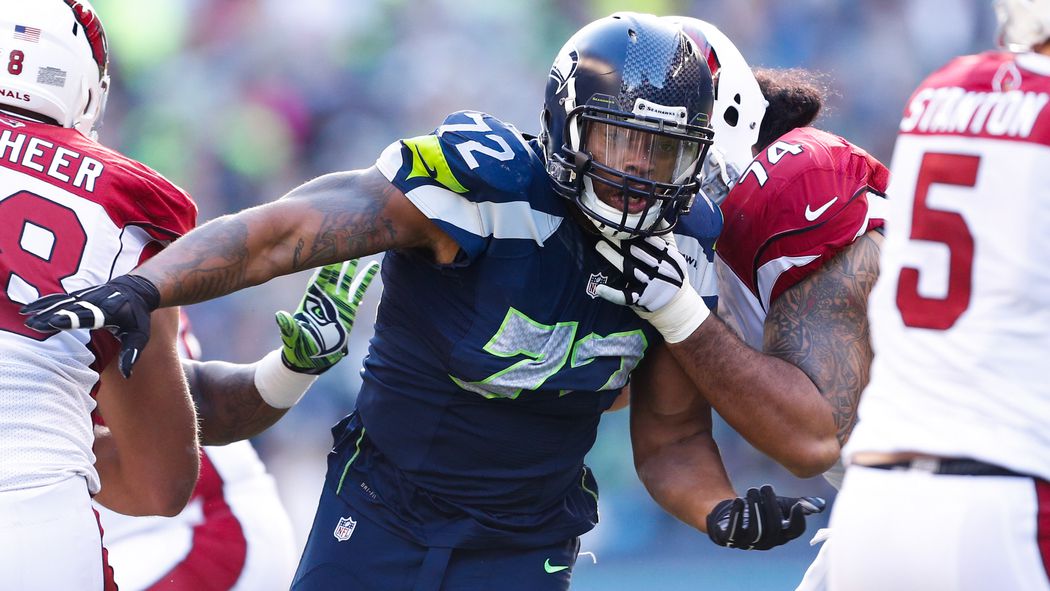 We can debate the merits of all of the young quarterbacks in the NFL right now until we're blue in the face, but Russell Wilson did something last Sunday that solidified him as the No. 1 young gun for me. This something just so happened to occur on a play that actually lowered his quarterback rating.

The Seahawks were trailing the 49ers, 7-3, but they had moved into field goal range just before halftime. Looking at a third-and-10 from the San Francisco 29-yard line with eight seconds left in the half, the Seahawks decided to try to take one more shot down the field toward the end zone before settling for a field goal.

Now, you can say that's greedy, but it's perfectly logical to take that shot as long as you have confidence in your quarterback that he isn't going to try any risky thr ...

Wilson and his slot receiver, Doug Baldwin, looked to be different pages. Baldwin tried to bend in his route up the seam. Russ threw the ball as if Baldwin would continue straight up the field. It was probably also a little high, but anyway ...

The remarkable thing happened after that. 49ers safety Eric Reid, the guy who had already committed two pretty stupid personal foul penalties prior to making this play, picked him off, evidently feeling a little disrespected by the fact that Wilson tried him like that. Reid tried to take the interception all the way back for six. And he would've gotten away with it too if it wasn't for those pesky kids.

The holidays are fast approaching and you still need to buy gifts for your friends, family and loved ones. You’re stressing out, and Santa is not walking through that door. Luckily, we’re here with this handy Holiday Gift Guide.

Reid had an impressive convoy ahead of him consisting of Ahmad Brooks, super-rookie Chris Borland and Antoine Bethea just looking to steam roll anybody that got in their path. As luck would have it the only guy in their path with any legitimate chance of making the tackle was ...

But how 'bout this? When the smoke cleared, Brooks had been stiff-armed out of the way. Borland had been tossed aside so violently that he sustained an ankle injury severe enough to knock him out of all but one play the rest of the game, maybe even the rest of the season, Wilson was on the ground out of bounds, having crossed Reid's path. That slowed him down enough for Robert Turbin, who was on the ground with Reid's legs in his arms after he tackled him from behind thanks to Wilson slowing him up.

That's what you call a championship play right there! A guy doing whatever had to be done to win a game his team could not afford to lose. The guy just so happened to be a quarterback. If you didn't know what position Wilson played before that, I bet you could have been convinced he was a linebacker or fullback. Dude stared down the gun barrel and didn't flinch at all. And that's why, once again, he would be my quarterback out of all the youngins every day of the week and twice on Sundays.