Marvin Lewis has unfinished business with the Bengals

Lewis has been on the sidelines in Cincinnati for 12 seasons and 100 wins, molding players and mentoring assistants. But Lewis and the Bengals are still searching for their first playoff win and a Lombardi Trophy of their own. Can Lewis take his team all the way this year?

Share All sharing options for: Marvin Lewis has unfinished business with the Bengals

CINCINNATI - A golf excursion mixed with a wedding jaunt seemed like a fine idea back in early July to Marvin Lewis. So, off he trekked to Hilton Head, S.C., for a few swings and then on to Atlanta to hear a couple of "I do's." The golf was with Atlanta Falcons head coach Mike Smith. The wedding was for one of his players, cornerback Adam Jones, and his bride Tishana.

The golf was great. Then Lewis left for the four-hour drive from Hilton Head to Atlanta at 4 a.m. on the wedding day. A tire in his rental car began leaking air. No service station along the way was able to find or fix the problem. So, Lewis kept frequently stopping and kept filling the tire with air.

"The wedding was a great affair, a great mix of their family and friends and former and current players, staffs from Tennessee (Titans) and Dallas (Cowboys) and other teams he had played for," Lewis said. "I'm so glad I got to see the varied people who care so much about him. And see the way he orchestrated everything, checking on everyone throughout the whole deal to make sure everyone was OK.  People don't know just how much he cares about life and football. When we lost our playoff game last year (to the San Diego Chargers), it was like someone stuck a knife in his heart. We have watched him grow so much."

While others only saw the nickname "Pacman" in Jones, Lewis saw Adam.

That is why he was willing to turn that four-hour drive up and four-hour drive back into a 24-hour marathon. With the ceremony, with all of the stopping for air, Lewis did not get back to Hilton Head until 4:30 a.m. the next day. Up all morning. Up all night.

For 12 seasons now as the Cincinnati Bengals head coach, Marvin Lewis has routinely given his players and this city his days and nights.

"I think that's important," Lewis said. "It's been a lot more than a job since I got here from Day 1."

It must be one of the reasons he has endured in Cincinnati, a city he embraces and one that has done the same. He calls it a place of "well-educated and philanthropic people." Those are precise words that describe him. Lewis is currently the second-longest tenured NFL head coach with his team, his 12 seasons trailing only Bill Belichick's 15 with the New England Patriots.

Bengals owner Mike Brown continues to trust Lewis as a steward of the franchise.

His players trust him even more.

"He is a father figure to me and to so many players in this locker room," Jones said. "Words cannot express the love I have for him. I know that he truly cares for me in a way that very few coaches ever have."

These Bengals under Marvin Lewis have built one family. One huge goal. 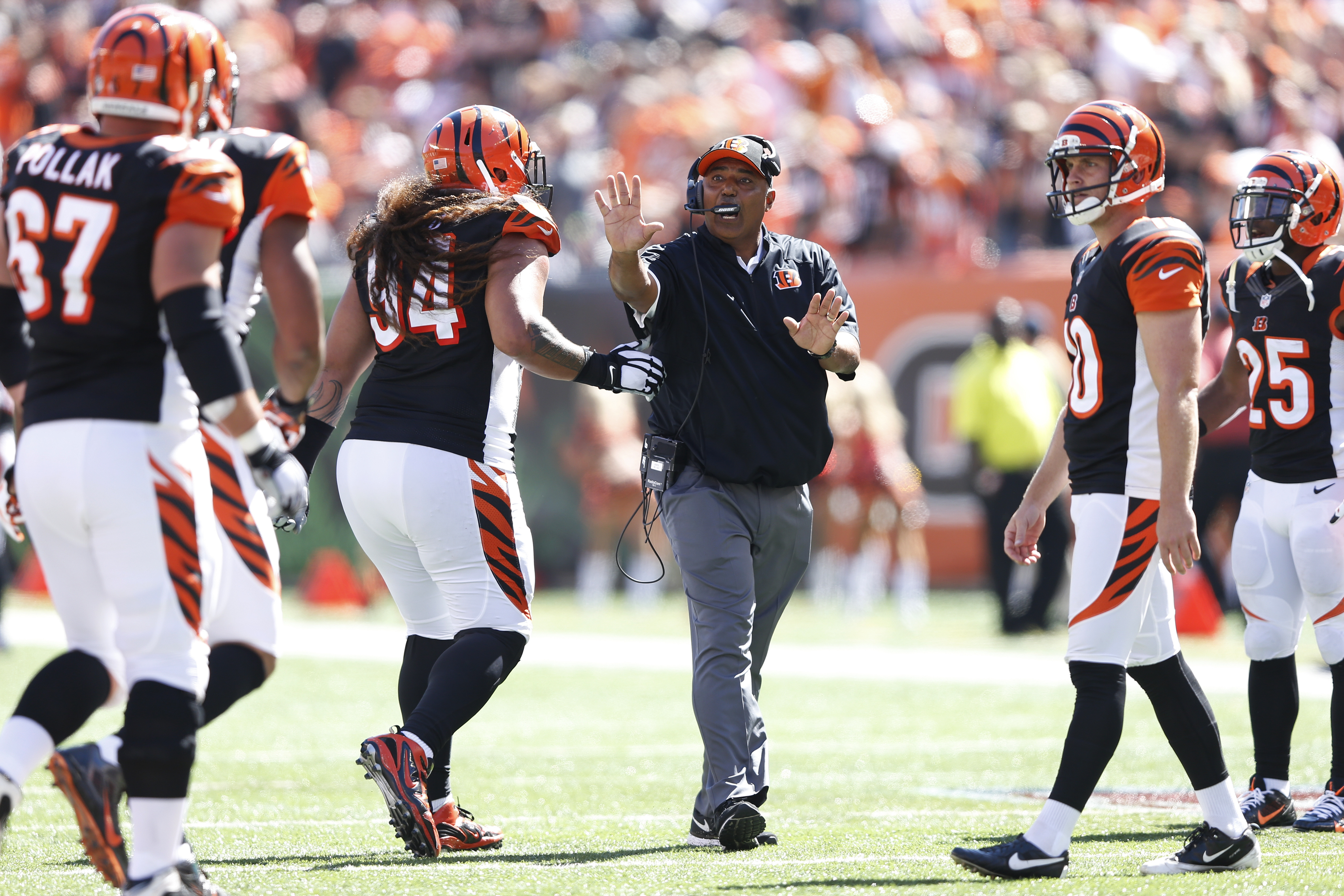 It is there. It is close. It is tangible.

The Bengals are 10-4-1. They play at the Pittsburgh Steelers on Sunday in a clash that decides the AFC North champion. The Bengals won the division last year. They are already in the playoffs. It will be their fourth-straight postseason appearance and fifth in the last six seasons.

Their swanky play in deposing the Denver Broncos here on Monday night turned heads. It was the 100th career victory for Lewis. He is only the 37th NFL head coach to reach that milestone. But there is a hole - Lewis and the Bengals are 0-5 in his playoff games. Mike Brown has been yearning for a Super Bowl trophy for so long that everyone in the Bengals organization knows exactly what these postseason trips mean. Can we ever get there and win it? Can we at least get past the first round?

Lewis and his Bengals have their eyes on Pittsburgh. But their scope is for so much more.

The Bengals showed against Denver that they can get hot and streak and play fast and play physical and beat any opponent.

But can Marvin Lewis guide them to greatness? Are they really good enough for that?

"Well, we have had some good teams here and we've also had a lot of good pieces in and out," Lewis said. "We really have enough leadership on this team. We have a core group of guys that are outstanding. It's just find a way. Find a way to be group of men. Find a way to get hot here at the right time."

Lewis may love ‘em but he rides ‘em. Hard.

He comes from the early stages of the Bill Walsh minority coaching program, where before he became Steelers linebacker coach under Bill Cowher in 1992 he participated under Walsh and longtime former NFL coach Marty Schottenheimer. Cowher left a lasting coaching impression on him: Cowher's mantra was put the players in the best position to succeed and it's not what you know but what does the player know?

Because he connects with his players and invites their involvement, he often gets an extra earful.

"Sometimes players want to fight you every step of the way in doing what you want them to do," Lewis said, laughing. "Everybody's got a job to do. But just in our Denver game, I had guys telling me on the sideline to do this or that and insisting on it. It's great. You just have to figure out how to turn that excitement and involvement into positives. You want them involved and rough. You can't win with church mice. You have to have tough, physical people - that's what this game is about. I always remember this: I don't have a job without these guys. My job is to bring the best out of them in every way."

Everyone wants to hinge the Bengals postseason chances on quarterback Andy Dalton. Lewis knows he cannot win the Super Bowl without Dalton playing well, but Lewis is more concerned with his team playing complementary football.

Dalton tunes in to Lewis.

"It's been great having him as my coach," Dalton said. "In this league when you play your first four years and have all four of those years with the same coach, that's huge. We've got a great relationship. He comes to me about the things he wants done. He is the guy that drafted me and believed in me. I believe in him."

It is clear how much Dalton wants to get it right. Only the games will tell how much he does.

"Coach Lewis has a heart," said Bengals defensive end Carlos Dunlap. "He can relate to anybody. He wants us to build our own reputation. That's how we do things here."

Bengals receiver A.J. Green added: "Coach Lewis is a father figure to me. It's family here. He tries to keep us nice and grounded. He wants to keep us humble. We are trying to be like him and show it. I really don't talk that much. But he talks to me about the little things it takes to be great."

Lewis wants his team to clean up stupid celebratory penalties. He wants the offensive turnovers to disappear moving forward as the games become bigger, larger on the quest for a championship. He has effectively tutored his coaches, too -- from his staff last year both his defensive coordinator (Mike Zimmer with the Minnesota Vikings) and offensive coordinator (Jay Gruden with the Washington Redskins) became head coaches.

He said players want to come to Cincinnati. They stay after their careers and raise their families there. They are not looking to leave.

"There has always been a family feel to this organization and to this city," Lewis said. "I can't tell you how many CEOs here have told me that they believe in helping people, helping young people, that they believe that it builds a better customer and a better employee for them. I understand how badly people want us to win here. It would fulfill a lot of dreams."