Who needs a Defensive Player of the Year award when you have TWO Hoss of the Week awards! Retired NFL defensive end Stephen White hands out the hardware to the Chiefs' pass rusher for outstanding conclusion to the season.

When the Chiefs refused to pay his asking price on a contract extension this past offseason with one year left on his contract, outside linebacker Justin Houston didn't curl up in a ball and cry. He didn't threaten a holdout or do anything else that anybody could consider a distraction. All he did was go out on the field this season and raise his asking price even higher with his performance.

Taking nothing away from Texans all-world defensive end J.J. Watt, it's kind of crazy that even though Houston has led the league in sacks each week for most of the season, his team was a playoff contender right up until Sunday and the fact that he did actually end up with the league sack title this year, with 22, which was just .5 off Michael Strahan's record and a full two more than Watt, you almost never hear his name in discussions of the Defensive Player of the Year award. Yeah, I know there is more to that award than just getting sacks. Hell, I played with two guys who won it back in the day, so I have seen what it takes.

At the same time, Watt wouldn't be getting mentioned for MVP and all these other awards if he didn't have high double-digit sack numbers, that's just a fact. That many sacks and leading the league for multiple weeks in that category should have attracted folks to Houston's game this season and at least put him on the outskirts of the conversation for DPOY.

It's not like Houston is some kind of slappy against the run, either. He had 68 total tackles this year, a career high and only 10 fewer than Watt. Speaking of career highs, he also hit his peak this season for forced fumbles with four. That just so happens to be as many as Mr. Watt, by the way. Houston also had five passes defensed, half of Watt's 10, but still nothing to sneeze at.

You know what though, I'm not even here to argue Houston's case as the Defensive Player of the Year. Want to know why? Well, it's because I agree with all of you and everyone else who thinks Watt is most deserving of the award this year.

All I'm saying is that it shouldn't be this much of a lock where Houston's name doesn't even come up when their numbers are so similar and when Houston's Chiefs won more games. It's not so much that Watt is a media creation, but when you give him that much face time and that many mentions, it tends to drown out other guys who are just as deserving of all the attention according to their play. I guess there's only so much shine to go around, so to speak.

That is especially true after the virtuoso performance Houston put on Sunday against the Chargers, but mentions of his big day are pretty fleeting.

Picture this, you have to win this game to get in the playoffs (and get some help from some other teams) and your starting quarterback finds out he has a lacerated spleen later in the week after most of the game plan installation with most practice already conducted. The team they were playing against only needed to win the game to get into the playoffs, no other help necessary, destiny in their own hands, blah, blah, blah.

That is exactly the situation Houston and his teammates found themselves in Sunday. There was only one thing they could truly control: getting the win. It was obviously not going to be an easy task.

Or so we thought.

Turns out having a kick-ass pass rush helps a lot when your team is relying on the backup quarterback to help lead you to a win. On a day when the Chiefs defensive linemen were all flying around the Chargers backfield, it was Houston who shined the brightest, disrupting the Chargers passing game and giving Phillip Rivers fits all afternoon.

In the middle of the second quarter with the Chargers facing second-and-20, Houston turned the corner on right tackle Willie Smith who was, for some reason, in the game for DJ Fluker, with a rip-and-run move, then splattered Rivers for a loss of 6 yards. The Chargers ended up having to try to convert a third-and-26 from their own 6-yard line on the next play. There ain't any plays in the playbook for that, and they ended up punting on fourth down two plays later.

Houston struck again, with 2:11 left in the second quarter. The Chargers were facing a third-and-9 at their own 35-yard line. Houston got underneath Smith with a bull rush right in his chest, then ripped inside to take Rivers down again.

Now you would think the Chargers would see they couldn't block the guy one-on-one at that point and start sending the right tackle help, no matter who it was. They had halftime to make adjustments and errthang, so surely they would find a way to double Houston on passing downs in the second half, right?

With 11:34 left in the third quarter the Chargers singled up Houston again on a first down passing play. This time it was Fluker, but I'm not sure it would've made much of a difference who was in there. Houston thanked them by immediately deploying another bull rush to inside rip move on Fluker, and with Rivers trying to scramble up and away from him, he stuck out his go-go gadget long arm to knock the ball out of Rivers' hand for a sack and a fumble. The Chiefs recovered the ball on the Chargers' 17-yard line which helped the offense eventually kick a field goal to make the score 19-7 in favor of the Chiefs.

OK, so at this point Houston already had three sacks, a forced fumble, and 21 sacks on the season. It appeared his team was going to win the game and quite possibly make the playoffs. It would be understandable if he had relaxed a little bit and let off the gas to actually allow himself to revel in the experience.

He still had a lil more bidness to take care of. 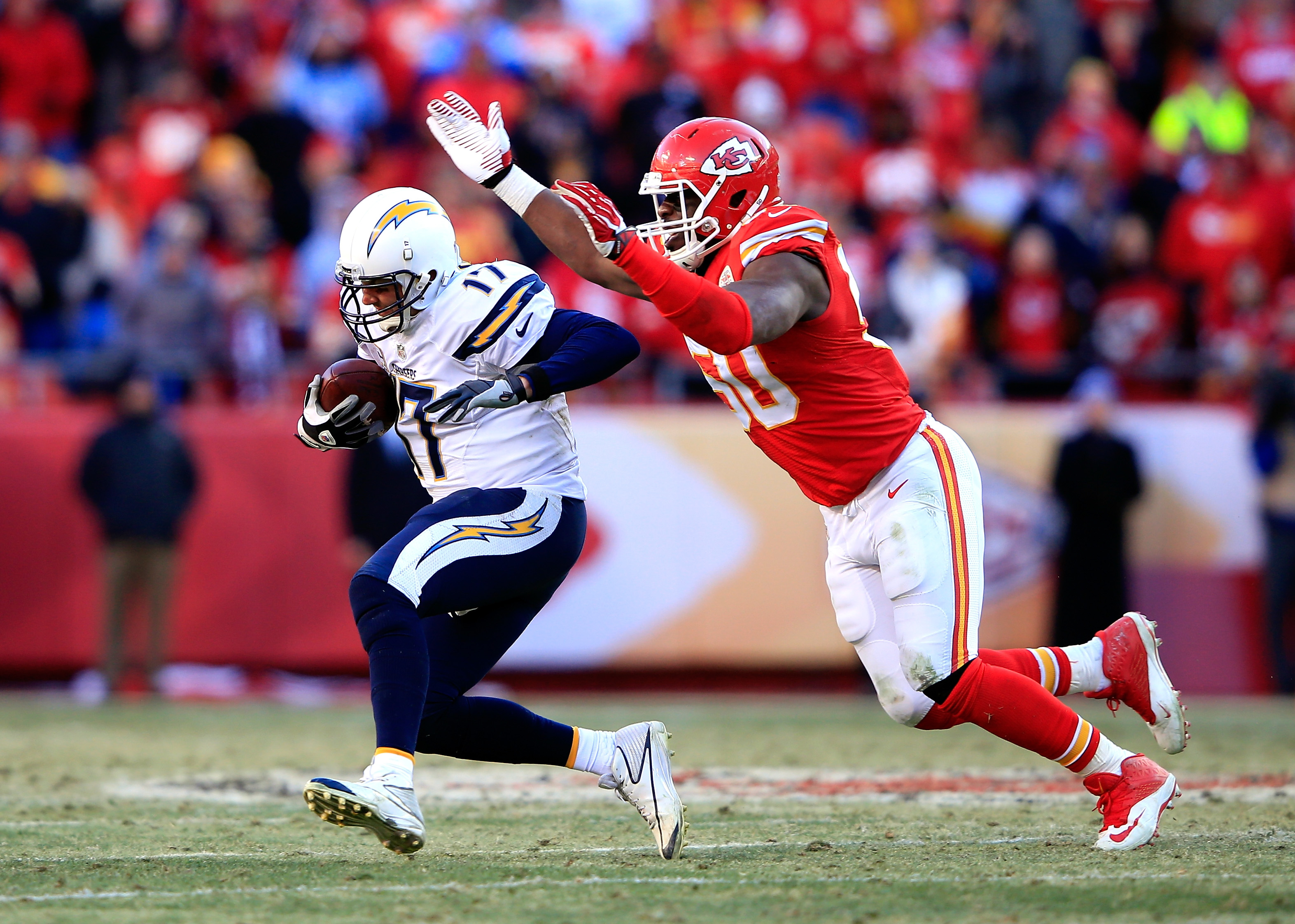 I'm pretty sure anybody who's been following the NFL the last few years knows that the one thing you don't do is count Phillip Rivers out of any game until the final whistle blows. The guy just knows how to turn it on at the end of the game and put points on the scoreboard in a hurry. I'm sure that had to be in the back of Houston's mind as he took the field with 2:23 left in the game and his team leading. He couldn't allow Rivers to get surgical on their asses or everything he had done to that point might end up for naught.

So, with 1:10 left in the game and the Chargers already at the Chiefs' 29-yard line, Houston decided to strike one final time. The Chiefs were evidently doing a hell of a job covering downfield because Rivers just couldn't find anybody to throw the ball to. Houston lined up on the right side for a change and rushed inside like a defensive tackle. While Rivers was scanning downfield Houston ran a pass rush game and rushed from inside to outside of the left tackle. I'm not sure if Rivers sensed Houston was coming, but he did take off to his right in the opposite direction just before Houston turned the corner. Houston then turned on the wheels, determined to catch Rivers before he could throw the ball away.

I guess Rivers could tell he wasn't going to out run Houston at that point and that trying to throw it while being hit was going to be asking for trouble, so he just gave himself up for the sack on the play, losing 9 yards in the process. That play totally destroyed the rhythm the Chargers started the drive with and pushed them back far enough to make it impossible to score again.

Basically, Houston ended the game right there with the effort he put forth to get the sack on that play.

The Chiefs and Houston held up their end by winning the game. Unfortunately, they didn't get the help they needed to get into the playoffs as a wild card. I know it's not much of a consolation, but I still wanted to recognize and acknowledge the superhuman efforts that Justin Houston put forth to get that win over the Chargers by naming him my Hoss of the Week for Week 17 of the NFL season. That makes him the only two-time winner of the award this season and for all intents and purposes my Hoss of the Year.

I just want to wish good luck to Mr. Houston this offseason as he tries to find a bank with enough assets under management to cover the checks these teams are going to be throwing at him once free agency starts.