Thank you, New York, for buying me drinks.

Share All sharing options for: 2014 Super Bowl media party: A splendid evening on someone else's dime

The tweedy man wearing a wool sports jacket next to me pulled out his cell phone as soon as the 'D' train crawled out from under ground, onto the Manhattan Bridge and into reception. He called a recently dialed number, waited one ring then began talking with no hello.

He shoved his phone back into his slacks and in the process knocked his wool packer hat off his head and onto my shoulder. He put it back on, faced forward, waited a beat then turned back to me and asked:

"Hey, can I get your opinion?" 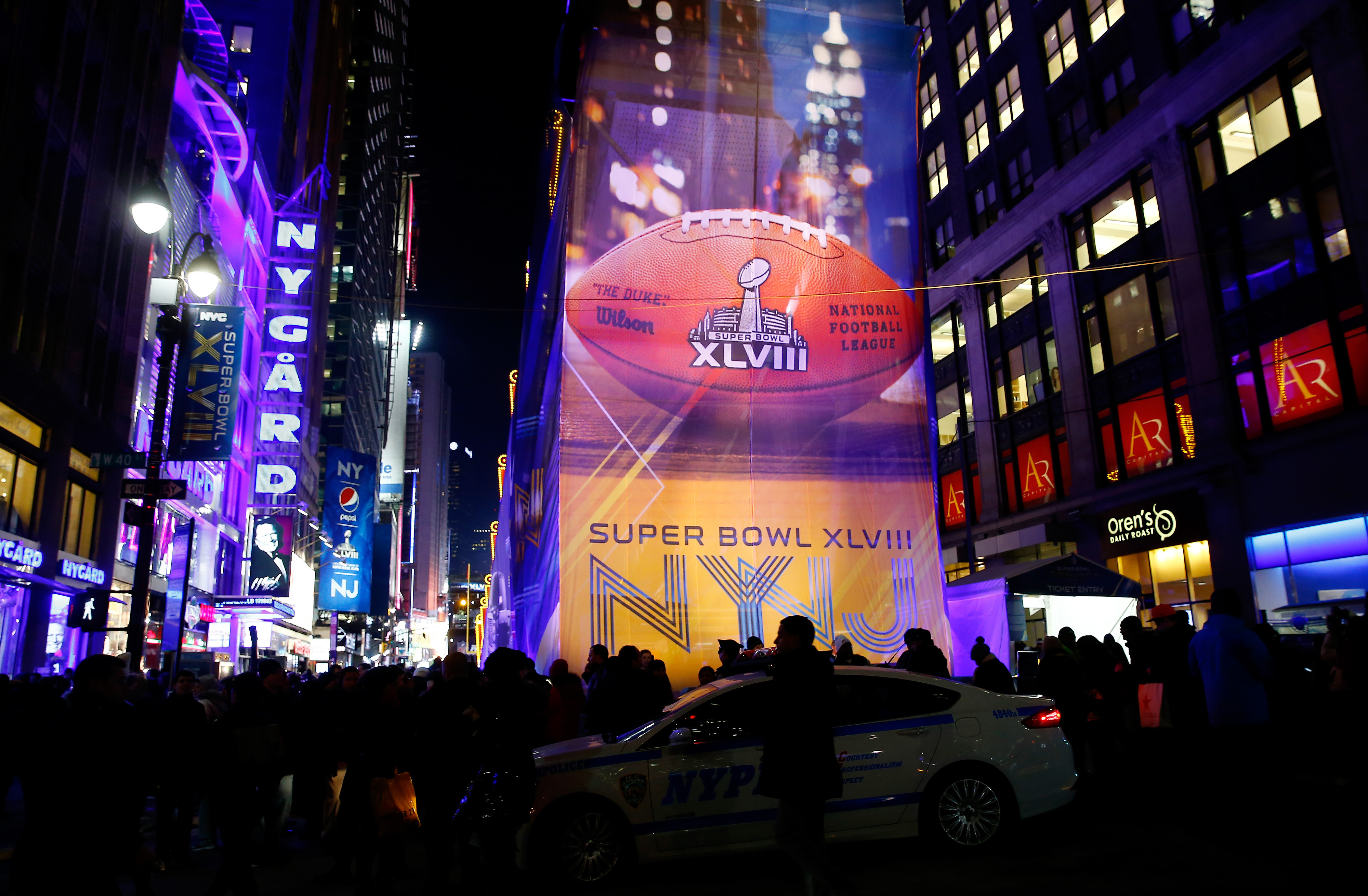 "You think anyone would show up to an event tonight?"

I had a pass to the Super Bowl Media Party that night, put on by the Super Bowl Host Committee. I got my pass -- despite fulfilling the loosest definition of "media" -- from a friend who doesn't cover the NFL but works for a publication big enough to have a duffel bag full of the damn things.

I didn't know I had an invitation until about an hour before I had to get the train out of Brooklyn. I did my cursory research essentially as I was headed out the door. The party reportedly cost $500,000 out of a $5 million budget secured by Andrew Cuomo and the Host Committee to promote New York, New Jersey and the Super Bowl, ostensibly. Whatever this was, it was on the taxpayers. 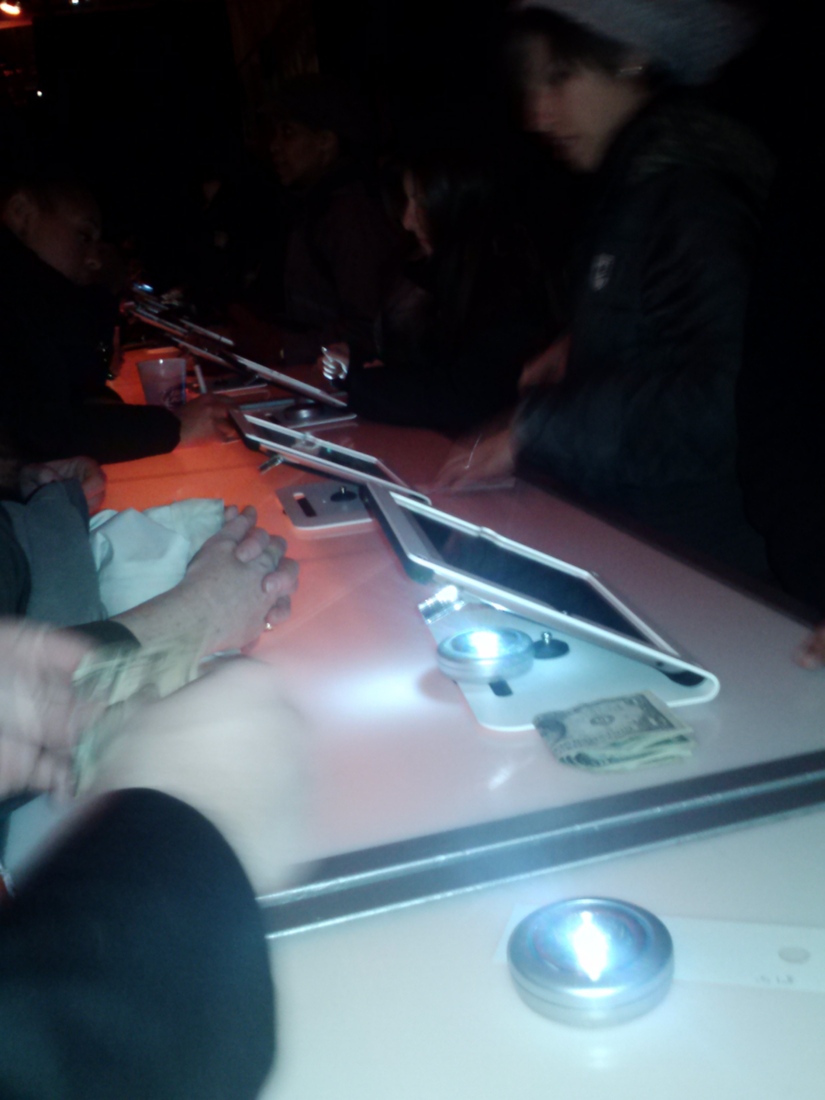 Coat check was handled by a row of young 20-somethings manning his or her own iPad. I input my phone number. They scanned my coat label, and I got a text message instead of a ticket. An error message popped up on the iPad. The scruffy dude at the helm mashed the "home" button until the screen unfroze and he could reenter the app. A few seconds later, I handed off my coat.

The main exports of New York and New Jersey are artisanal tacos, barbecue and beer, or so I gathered. The staging area was a big, well-cordoned shed inside Pier 60 at Chelsea Piers. Bare wooden booths handed out a number of delicious things while over at the main stage, DJ Ruckus spun records. In another area, a man was making a chalk drawing of sea-snake-dragon. 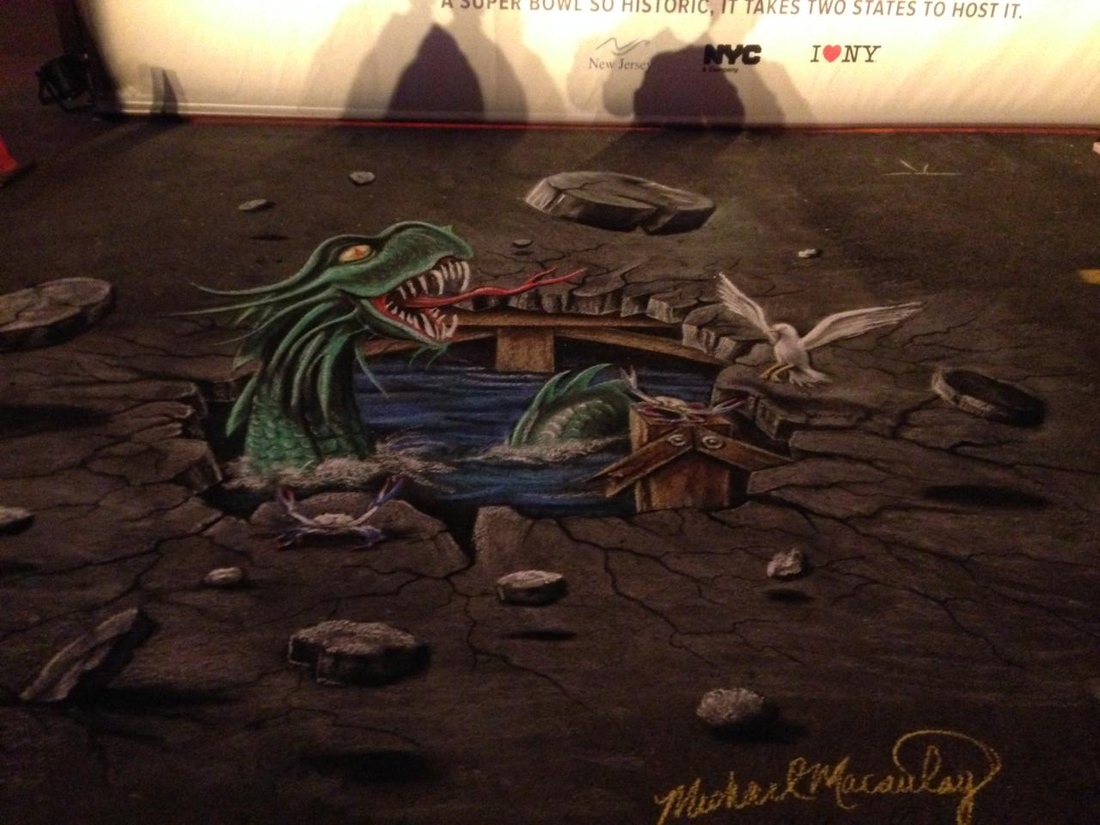 It was neither a Seahawk nor a Bronco.

The lounge was set up to be a step up in class, though the drink selection was the same. The important thing was that everything was still free. That glittering silver streamers were hanging over the bar from a faux-weeping willow was secondary, though nice. There were cocktail tables and ottomans in front of a stage. Perhaps too many ottomans.

A Broadway revue was on stage at the front of the hall. The host asked, "Does anyone here like football?!" and a lot of "woos!" sprang out from a crowd of journalists. The host took this as prompt to start singing a song from Mamma Mia! or something that may as well have been Mamma Mia!. 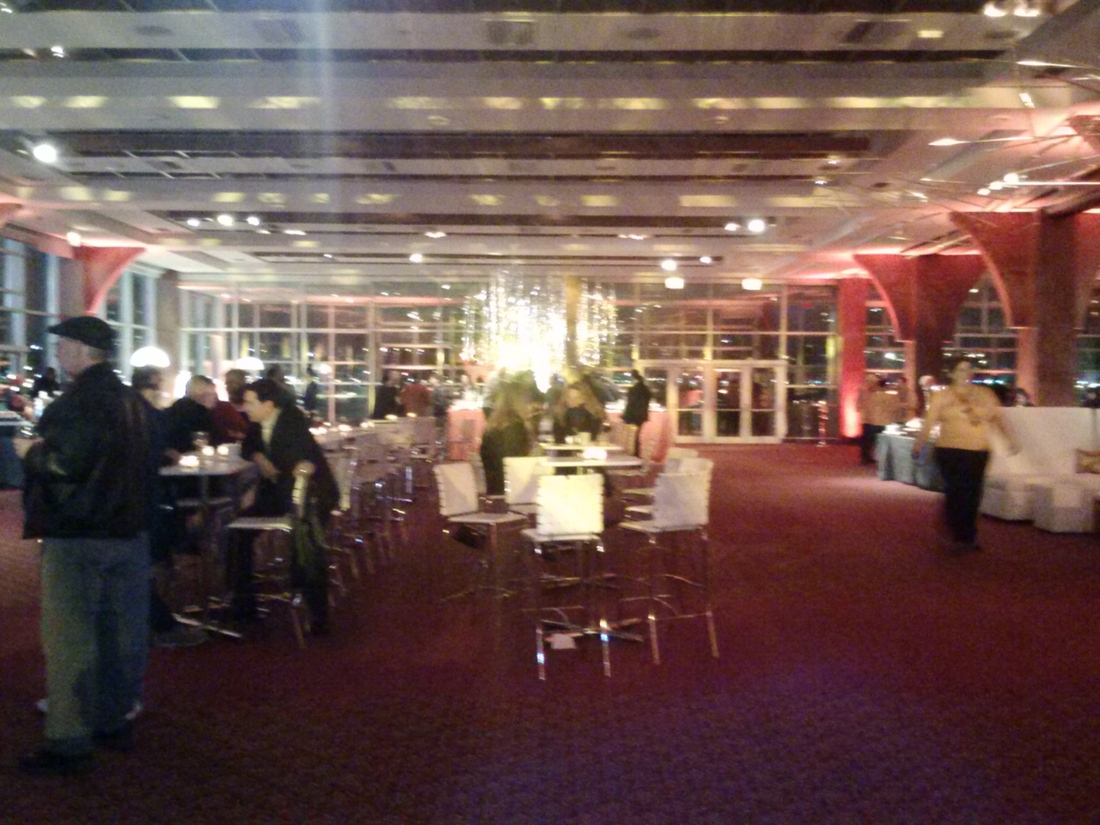 The hors d'oeuvres were relentless.

No thanks, that's fine.

What are the sauces?

*[The full descriptions of what I ate were much too difficult to remember. These are my guesses, and they are horribly wrong.] 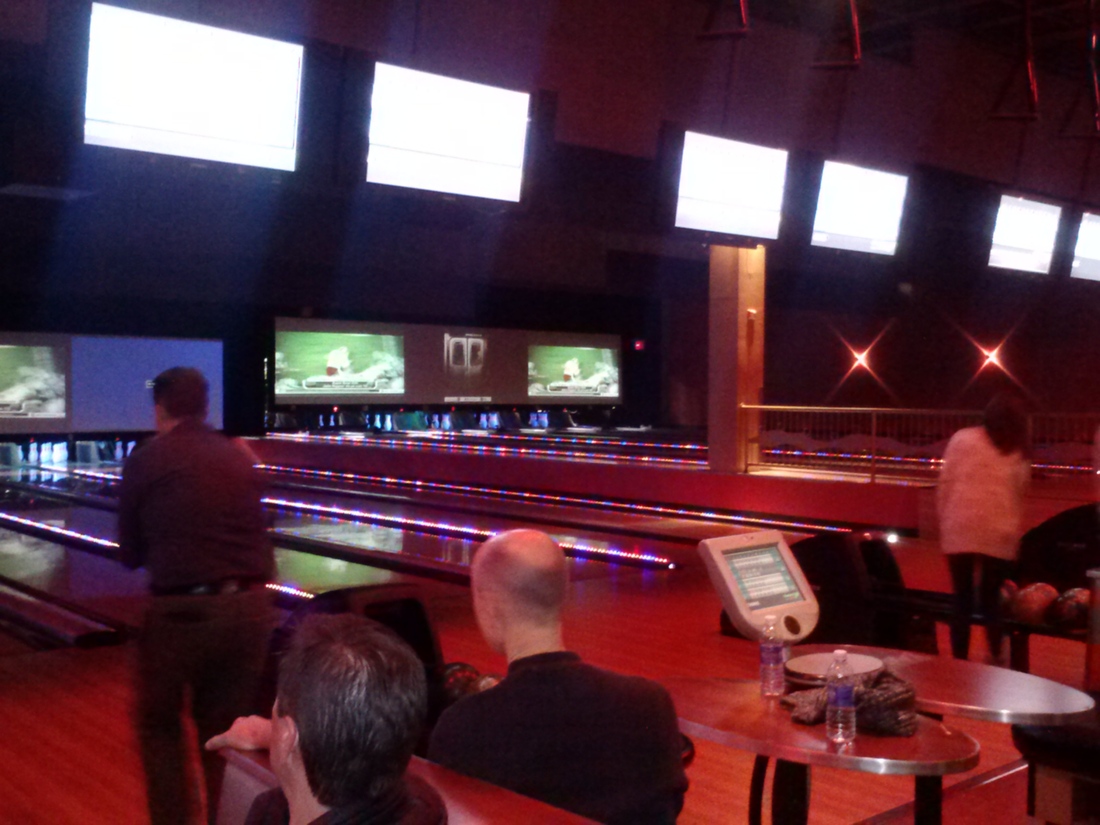 There was a bowling alley, too. Just like everything else, it was free, which made me disappointed that more people weren't playing. I wasn't about to start playing, but somebody ought to have taken advantage of the opportunity. Bowling is expensive.

The arcade wasn't free, so I didn't win the bear I had promised to a nice volunteer. I avoided eye contact with her, a sweet, older lady, as we went back into the staging/expo area. We were in the last hour of the party, and the alley and the lounge had cleared out. Everyone still left was gathered around the DJ stage, where DJ Ruckus had ceded his spot to ?uestlove. 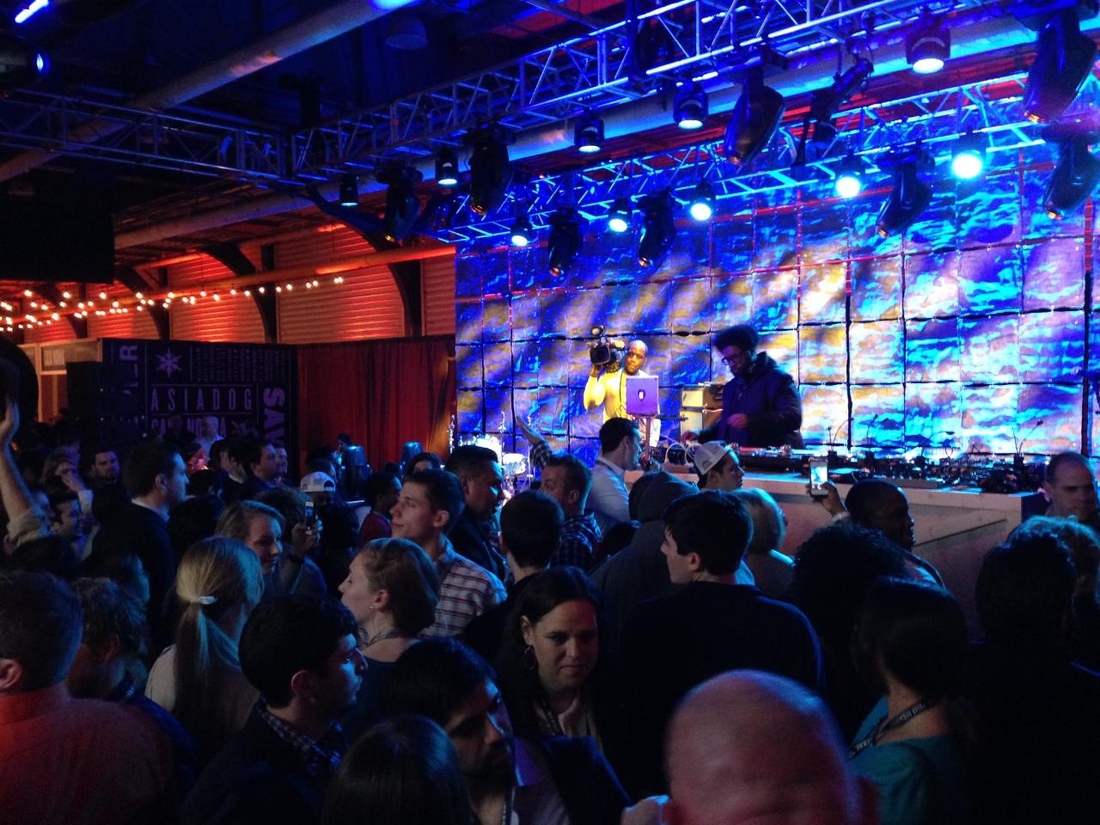 People danced as they do when ?uestlove is around. The crowd -- reporters, bloggers, video crews, presumably -- was well lubed. As was I, enough to desperately want to reach out and touch ?uestlove as he passed by within arms length at the end of his set, though not nearly enough to do it. ?uestlove finished his set 10 minutes early, at 10:50, and that effectively ended the party. The mass idled toward coat check.

"You wanna head out?"

"Can you enter the last four digits of your phone number into the iPad?"

You sent me a text message with the claim number. Look, here.

"Oh cool, you got the text. Just enter the last four digits of your phone number real quick?"

I entered my digits, and my 20-something attendant, a girl this time, took out a pen and paper, wrote down the same claim number that was on my phone and went off to find my coat.

My friend went off to the bathroom one last time. I whittled away my wait watching a young, drunk girl slither her tongue in and out of the lips on a big fat man's face. Just before, in line at coat check, a fight broke out between two younger men, and was broken up by an older man in a pea coat and leather gloves who looked like he had wanted to leave much earlier in the night.

We left and were remarkably quick getting a cab considering the amassing crowd on the sidewalk. We zipped off toward the tunnel. My friend said:

"Thanks for coming out for this, that was a lot of fun."

Totally, that was actually pretty cool.

"Yeah it was, I had no idea what to expect."

What the hell did it have to do with the Super Bowl?

• Strippers, the Super Bowl and why entertainment should be enough