Michael Sam and the fickle finger of NFL Draft rankings

The former Missouri defensive end is out and headed for the NFL. Anonymous sources and the NFL Draft pundits they feed are already getting carried away.

Share All sharing options for: Michael Sam and the fickle finger of NFL Draft rankings

It didn't take long for a host of NFL players and fans to embrace former Missouri defensive end and 2014 NFL Draft prospect Michael Sam following his decision to reveal publicly that he is gay. Anonymous NFL team executives moved just as quick to denounce the "distraction" of a person being open and honest about his sexuality. But the speediest reaction time of all came from NFL Draft pundits who embraced the "distraction" narrative and sent the 2013 SEC Co-Defensive Player of the Year tumbling down their carefully assembled, unassailable player rankings.

Nowhere did Sam slip further and faster down the rankings than he did at CBS Sports' NFLDraftScout.com, overseen by Rob Rang. He was the ninth-ranked defensive end on Sunday night. On Monday morning, the site had him as the 14th-ranked defensive end. The most noticeable fall came on the overall player rankings at CBS, where Sam went from 90th in the hours after he came out on Sunday night to 160th on Monday morning. 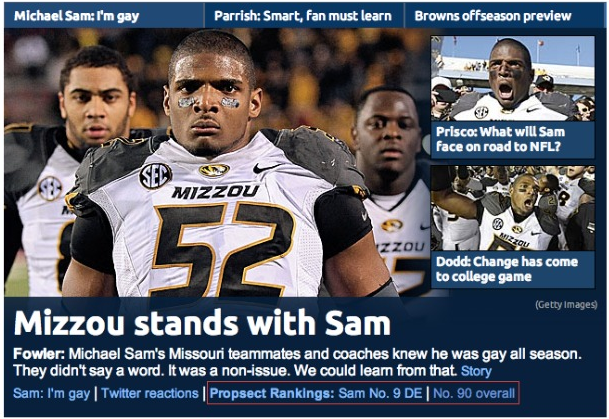 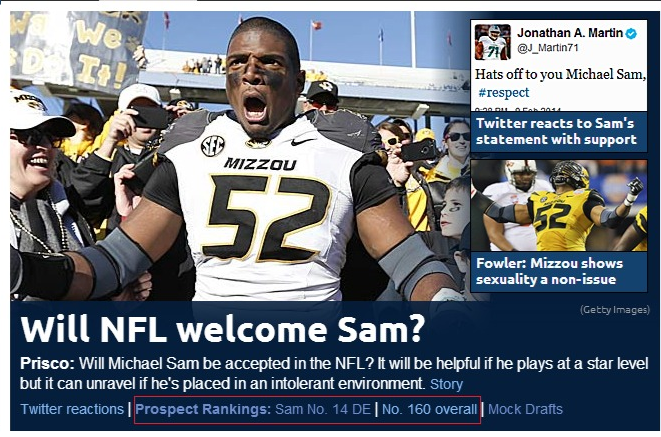 Seventy spots! Rang or someone else at CBS dropped Sam 70 spots overnight. Whether a player is gay or straight, it doesn't change how he plays football (and Sam's been open with his Mizzou teammates for a while now), so what happened to send him plunging down the rankings board?

"I don't think football is ready for [an openly gay player] just yet. In the coming decade or two, it's going to be acceptable, but at this point in time it's still a man's-man game."

(via Pete Thamel and Thayer Evans at SI.com)

Michael Sam came out to the public on Sunday night. What followed was an avalanche of reactions by total strangers, all of whom felt deeply involved in the news.

I'm really shocked that NFL execs would say things like this, anonymously; after all, these are the same people so committed to competency above all else they'll hire expert coaches like Brian Scottenheimer, Kyle Shanahan and Mike Shula. Okay, maybe not.

Let's face it, the world of NFL Draft punditry doesn't need blind quotes from personnel men to set the narrative. They've been doing this for a while. Cam Newton's smile, RGIII's celebrity and Manti Te'o's fake girlfriend. There's a well-established pattern for lumping the personal with the professional when it comes to players in the NFL Draft.

Criticism of Te'o actually subsided after he took questions at the Combine. His handlers then kept him on ice through the Draft process, carefully managing the scant few interviews he did before and after the Chargers picked him in the second round. Of course, by March, Draft punditry fixed its gaze on Geno Smith and whatever it was he did or didn't do in the huddle at West Virginia.

In the grand scheme of things, the names of the players don't matter -- though top-rated black quarterbacks draw more than their fair share of specious scouting reports. It's all process here. And any player with potential "distractions" automatically draws the suspicion of groupthinking NFL analysts.

Rang made it clear in his explainer for dropping Sam from No. 90 to No. 160 overnight:

But by coming out, Sam turned a very bright spotlight on himself.

And the reality is teams would rather the bright lights shine on their superstars on game day. Any club drafting Sam would add distractions for players, and teams normally work to avoid any distraction.

As the media glare intensifies at the Scouting Combine and the weeks leading up to the draft, Sam will be viewed as more and more of a distraction. That fact -- not Sam's homosexuality -- is what will cause him to slip into the late rounds or perhaps even entirely out of the draft.

No, it's not just you; that's confusing. In the eyes of the NFL Draft analyst-industrial complex, Sam's a distraction because he came out, because he rightly expected not to have to hide his identity as a public figure. A gay player should, as per NFL punditry and the anonymous execs they court, stay in the closet and be a good teammate ... apparently so the team's superstars can get all the attention.

That is the most and least NFL (NFL as in Protect The Shield) thing ever.

Rang didn't invent the narrative here. The media started sending up red flags about players as distractions years ago. It's the ugly process we're forced to suffer through every spring, an endless loop of takes, empty analysis, anonymous front office sources hiding behind their status and media hand-wringing over college players entering the NFL Draft.

One round or another, Michael Sam's going to the NFL, and like any player, his life off the field will be an afterthought for message boards and comment threads once he establishes himself on the field.

The Jackie Robinson comparisons are apt. Michael Sam is breaking down barriers for acceptance and equality. It's new territory for pro football and sports in general. But, sadly, there's nothing new about how he'll be treated by the NFL Draft analysis machine.

Late update: CBS has since moved Sam up to No. 110 on their player rankings. The point remains.