At 5'10, Jason Verrett won't be one of the bigger corners in the NFL, but that's not going to stop him. Verrett spoke with SB Nation about his journey from TCU to the NFL, covering everything from his childhood heroes to prepping for the draft to how he'll handle the league's biggest receivers.

It took Jason Verrett just one game to lose his starting spot. It only took a bit longer than that to get it back. When the talented cornerback first landed at TCU in 2011, he was handed a starting spot to open the season against the Baylor Bears. Unfortunately, it was the first game of Robert Griffin III's coming out party. Verrett was torched and even years later, he says it was the most humbling experience of his life.

Fast forward three seasons and few defensive backs are as heralded as Verrett entering into the 2014 NFL Draft. What's even more amazing is that cornerback is still a relatively new position for Verrett. A former slot receiver (or running back if you go back to his Pop Warner days), Verrett is a quick learner with a dynamic skill set that someone will value early. Is he a first round selection? Only time will tell, but he's ready to play for anyone. Especially the Raiders.

Three years at TCU, and now you're finished. Has it hit you yet? 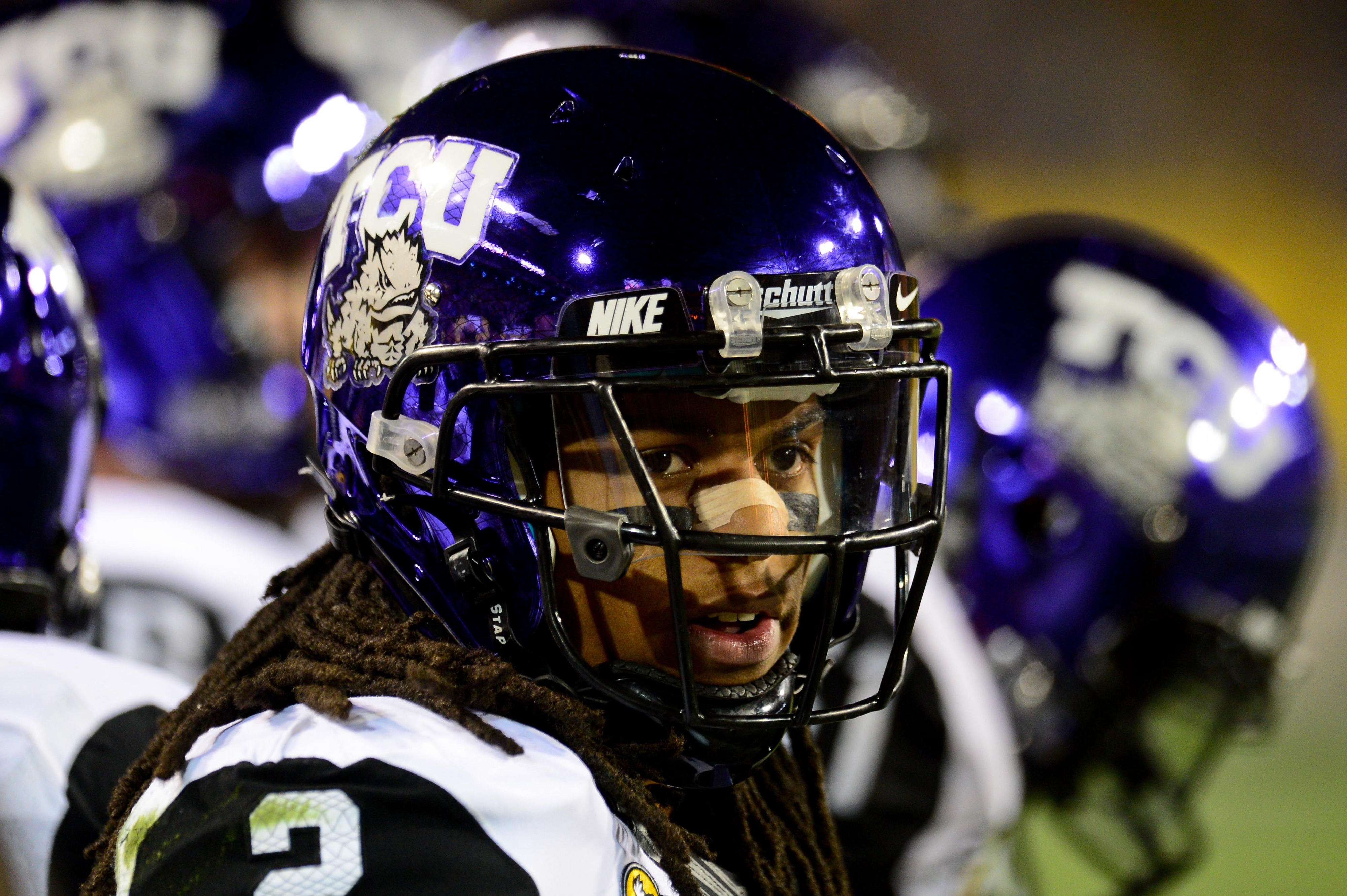 After I graduated, it didn't hit me until about two weeks later. I was going back home and thought, 'Man, this is really over.' Talking with some of my teammates, they're coming back to get ready for spring ball. I'm thinking, 'This is crazy. It's going by so fast.' It's still a little bit surreal now getting ready for the NFL. I mean, this is something I have dreamed of since I was a kid. I'm working hard at it just to focus all that I want to accomplish, but it is surreal that the Combine is right around the corner. I grew up watching the Combine, watching the NFL Draft. Now that I'm getting ready to be a part of it, it's a real blessing.

You said you've been dreaming of this since you were a kid. Take me to those days. When did you start thinking of that?

It started when I was probably eight-years-old. It was my second year of Pop Warner. I played running back and I was scoring a whole bunch of touchdowns. I told my mom, "I'm gonna go to the NFL. I'm gonna go to the NFL.' Ever since then, I've had aspirations of wanting to go. It lasted all the way through high school and then to JuCo, since I didn't get recognition out of high school, and then TCU. It's all happening now.

You started at running back in your youth, so does that mean your idol was a running back?

Oh, yeah. I looked up to LaDanian Tomlinson. He was one of my favorite running backs. He also wore 21 and that was my number growing up.

At what point did you make the switch to cornerback?

In high school, we really didn't have great position coaches compared to when I moved to Texas and saw all of those great coaches and all of that. So when I went to my junior college, I went there as a slot receiver. I didn't get switched to corner until the beginning of the season, and that was just because my coach said, 'You've got good feet. You'll probably go a longer way playing defensive back since you're 5'10. Not a lot of colleges or NFL scouts will want to recruit any 5'10 receivers anymore. They want you to be 6'2 or 6'3.' So I moved over to cornerback during my JuCo year. I played that year and then went to TCU and the rest is history.

So you must feel that you're still growing into the position.

Oh, yeah. I feel it's one of the hardest positions besides quarterback and wide receiver. You've gotta be perfect at everything. Everything has to be on point, just because so many other receivers are learning new things. You just have to be on top of your game as well.

What was the point where you felt it started coming together for you? Is there a single game or a play in particular?

After the first game against Baylor, I didn't play in that one. It was against Air Force. I didn't play that entire game after losing my starting spot because of the way I played against Baylor. It was the third game of my sophomore year and one of the other corners had gotten beat for a touchdown. He put me in and I made a few plays. After that game, I thought, 'Okay, I've got my groove back.'

That next game was against Portland State and I had three pass break-ups that game and one of the break-ups got tipped to a linebacker, Tank Carder, who ran it back for a touchdown. Pretty much after that game, I started to think I could do it. I had a real good season to finish off my sophomore year. Then going into the Big 12 during my junior year, I knew it was going to be tougher. I knew the receivers were going to be a lot better in that conference, but I was able to go out there and do my thing.

Best receiver you've had to cover to this point?

I don't want to single people out and then say other people weren't good. But I'd have to say Kenny Stills was great. Odell Beckham. I'd say Stedman Bailey, too. He was a good receiver. I mean, I had good games against him, but I'd say those three were the top receivers that I've seen.

Now that you're in this season of prep for the NFL Draft, what's the main advice you're getting to get ready?

The main advice right now that I'm getting from the guys I've trained with, like Brandon Boykin of the Eagles and Terrell Thomas of the Giants, just getting insights from them, is to take the Combine really seriously. It's about going out there, running good drills, getting a good 40. It's testing good. After that, I've got my Pro Day. With all of the visits coming, you just have to dial in. At that point, I'm going to worry about it then. For now, I'm just very focused on the Combine.

What part of your game do you still feel that you need to work on?

I don't feel like I have any real weaknesses. There's always things that I can improve on. Everything that I have, as far as my skill set, I feel is pretty good. The only thing I'm weak at is my height. I'm not six-foot, but that's nothing I can change. Getting stronger, getting faster, gaining instincts on the football field and becoming more knowledgeable about the game is what's going to take care of me.

Did you watch the Super Bowl?

So much is made of those bigger corners of the Seahawks and the NFL seems to be a copycat league. You brought up your height. Do you think that could swing against you?

Yeah, of course. It just really depends on the team. In Seattle, they're big on big corners. But even in Chicago, Tim Jennings was able to prove that he could play at 5'8 in the league, and Chicago is real big on tall corners. The Cowboys are as well. But teams like the Rams or Washington or Atlanta, they've got 5'10, 5'11 guys. I feel that I'm this height for a reason. I face 6'0, 6'1, 6'2 receivers in college. Of course, in the NFL, they're going to be a lot bigger and a lot stronger. But once I get adapted to the NFL, I'll be alright.

How do you learn to play bigger than your stature?

If I'm going to face a bigger receiver, I have to play bigger. I'm going to have to play smarter. I'm not going to worry about getting my hands on him too much. I'm just going to move my feet, stay in the space and compete. As a person being 5'10, I don't look at a guy who is 6'2 and think, 'Oh, he's too big.' My mindset is already that I can stop this guy. That's how I'm going to take that challenge.

By the way, favorite NFL team when you were growing up?

Oh, man, my whole family is from Oakland, so I grew up a Raiders fan. [Laughs] I used to go to the games all the time. I mean, they're terrible now. No, not really. I'm really a fan of all 32 teams right now. [Laughs]

If Reggie McKenzie and company turned in your name on a card on Draft day, how would that feel?

Oh, it'd be crazy. My family and friends would go crazy about it since that's home. It would be a humbling experience, growing up a Raiders fan and then playing for them. If that happens, I'd be blessed. But I'll be blessed no matter where I go.

• NFL mock draft: The Rams get a new quarterback

• Evaluating Michael Sam on the field