Leading up to today's Super Bowl XLVIII there was a lot of talk and speculation about this weekend's weather. There was even talk of a big blizzard thing. Now that game day is here, what exactly can teams and fans expect with the weather.

It's finally here, Super Bowl Sunday, and this year the big game corresponds with a popular weather holiday, Groundhog Day. Groundhog lore tells us that if the groundhog sees his shadow, six more weeks of winter, if he doesn't then it is an early spring. Unfortunately it doesn't tell us what it means for the Broncos or Seahawks later tonight. All I know is with all the hype of snow and blizzards leading up to today's game, none of that is in the forecast. 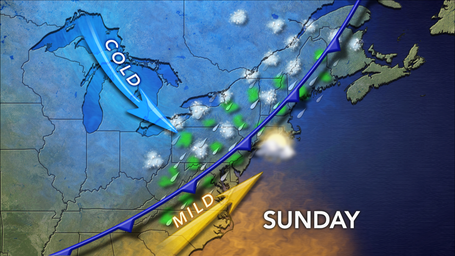 Cold front will slowly work across the area today, with it light scattered rain showers. While it is a cold front, it's not very strong and all those forecasts of very cold temperatures today are not right, temperatures this afternoon and going into the evening will be in the 40s.

Game time will feature cloudy to mostly cloudy skies, winds out of the west and eventually the northwest between five and fifteen miles per hour. Temperature for kick off will be around the low to mid 40s and falling into the upper 30s to just near 40 by the time the game is over. There is smallest threat of a passing shower or drizzle as we go through the game but nothing that should cause major problems for the players or fans.