Ron Jaworski and the next round of Johnny Manziel controversy

There's nothing wrong with having an opinion about the Texas A&M quarterback's draft stock, unless it fuels weeks of mindless debate in the national media.

Share All sharing options for: Ron Jaworski and the next round of Johnny Manziel controversy

Ron Jaworski is saying things about quarterbacks again. This time the ESPN analyst put Texas A&M Johnny Manziel in his hot take crosshairs, telling a Philadelphia radio station that he wouldn't draft the 2012 Heisman winner until the fourth round, at least.

Here's the exact quote from Jaws:

"Manziel may fall. I'm not crazy about him, to be honest with you. I've only looked at five games. I wouldn't take him in the first three rounds. That's my opinion. It's incomplete right now. But he has not done a whole lot to me."

It all stemmed from a report that the Eagles had met with Manziel at the Combine, an innocuous, normal part of what teams do in draft season ... and enough gasoline to keep fires of talk radio stoked through May.

Everyone's entitled to their opinion when it comes to the draft, but Jaws' feels like a real stretch here considering that Manziel is almost universally viewed as a first-round pick. Besides, I'm not really sure watching five games is enough to write off a player entirely. And where exactly did he find five games where Manziel's talent wasn't on display?

It'd be easier to swallow Jaws' assessment, or at least brush it off, if it weren't for his history of curmudgeonly takes on new NFL offenses and generating stupid quarterback debates.

Here was Jaws last May with his prediction for Chip Kelly's offense in Philadelphia:

The Eagles scored an average of 27.6 points per game last year, won the NFC East with a 10-6 record and made the playoffs for the first time since 2010.

In 2012, he finally came around on Michael Vick and predicted a big year for the quarterback. Vick had 12 touchdowns, 10 interceptions and a 78.1 rating that year.

And who could forget Jaws' quarterback rankings last summer? The talking head took an offseason space-filler and stretched it into weeks of debate embracing television in part by putting Joe Flacco at No. 4, ahead of Drew Brees even.

What most of us are leery of is the manufactured controversy that's sure to follow Jaws' Manziel comment.

His crowning achievement in controversy, so far, came from his Colin Kaepernick comments in August 2013. That's when he went on television and proclaimed his belief that "Colin Kaepernick could be one of the greatest quarterbacks ever." From that one sentence, ESPN launched a self-perpetuating "news" cycle of controversial takes about Kaepernick and quarterbacks that Josh Koblin at Deadspin deconstructed perfectly.

As of this very moment, NFL Twitter and it's obnoxious relative Draft Twitter are eating their own tails over Jaws' Johnny comments. Go read the timelines for a few minutes, if you can stomach it. Predictably, it went from a semi-rational debate about where Manziel could be drafted to circling the wagons to protect one of their own.

Sorry. I know Jaworski. He gives honest, well-researched opinions. He is not a screamer-from-the-rooftops. Some seem outlandish. So what?

Jaws certainly is entitled to his opinion about a prospect, like everyone else. It's a head-scratcher that he can have such a precise opinion about what round a player will be pick in given that he's been limited in how much he's actually seen the guy play. But, whatever: there are other national NFL media types issuing opinions on players they've never actually watched.

What most of us are leery of is the manufactured controversy that's sure to follow Jaws' Manziel comment, the same stupid process Koblin's Deadspin piece exposed last year with the Kaepernick comment. It's already happening. The quarterback expert for the cable sports giant weighed in on the draft's most well-known player and long-time lightning rod for hot takes.

Maybe noted Wonderlic leaker Bob McGinn of the Milwaukee Journal-Sentinel can go ahead and give us Manziel's score so we can get that out of the way now.

You can expect Manziel's draft stock, by way of Jaws' comment, to lead SportsCenter and the hours of NFL-centered shows with different names that all bleed into one insufferable marathon of television. This is what the bulk of NFL Draft coverage, hell, NFL coverage in general, is now. We even get two more weeks of it this year, but at least you know what's coming.

And just like that, our prediction came true, quicker than even most cynics would have imagined. Jaws' comments made SportsCenter on Wednesday morning. 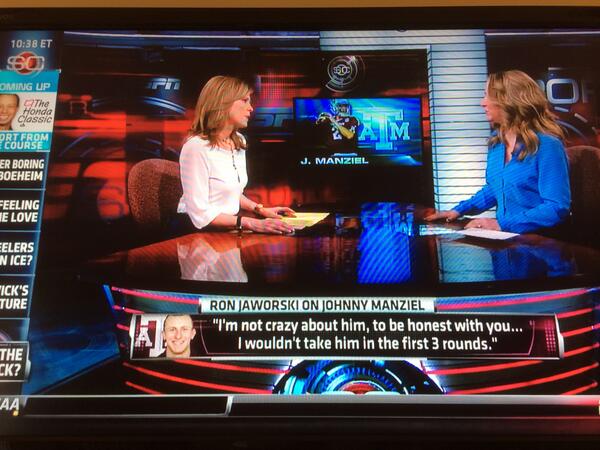 Loyal to the nature of NFL media draft analysis, I didn't actually hear what the ESPN anchors had to say about the comments. I know it's vacuous and not worth taking the first three rounds of the draft or listening to during the first three hours of the workday.

Now, if you'll excuse me, I'd like to get back to reading some anonymously sourced scouting rumors.