Sunday's halftime performance had it all: a rocking drum solo, James Brown footwork and, of course, the Red Hot Chili Peppers jumping around shirtless.

In the lead-up to Super Bowl Sunday, some had questioned whether Bruno Mars had the experience and entertainment chops to perform during the biggest concert of the year. At 28, the pop sensation is decades younger than some of the other music legends that have taken the Super Bowl halftime stage in recent years, like The Who, Madonna, Bruce Springstein and Tom Petty. But like the Seattle Seahawks, Mars proved age and experience were overrated. 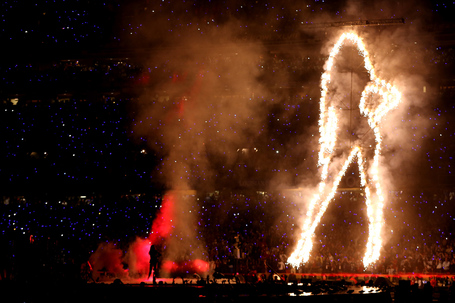 Mars delivered one of the better halfime shows in recent memory, fusing chart-friendly pop, old-school soul music and a boatload of energy.

He began his act alone on stage hammering through an impressive drum solo -- a prelude that seemed to emphasize to those of us only passingly familiar with his work that he's more than just a radio voice.

From there, he ran through several of his hits: "Locked out of Heaven", "Treasure" and "Runaway".

Then came the Red Hot Chili Peppers. Mars began by singing the refrain to "Give it Away", and suddenly the rowdy bunch had invaded the stage. They rocked through the song -- which concluded with the rather entertaining image of the elderly, shirless rockers jumping up and down with Mars and his young, gold jacket-clad soul band -- then made a quick exit.

From there, Mars closed out the show by crooning the lyrics from his romantic hit, "Just the Way You Are". The song was spliced with images of the men and women of the U.S. military making touching dedications to loved ones.

• 2014 NFL Power Rankings: We believe in Philly (but not Denver)