Share All sharing options for: NFL free agency 2014: The good, the bad and the ugly from Day 1

The start of free agency is one of the most-anticipated days of the NFL offseason and the kickoff to the 2014 free agency period did not disappoint. Teams combined to spend hundreds of millions of dollars while All-Pros and others shuffled around the league. As usual, the first day of free agency featured some eye-popping contract numbers and a surprise or two. In some cases, the dollars were spent very wisely. In others ... not so much.

Let's take a look at the good, the bad and the ugly from Tuesday

The move also secures the Bucs a No. 1 corner if they release Darrelle Revis as expected. While Verner isn't quite on Revis' level, he is a very good starter. He also costs a fraction of what Revis will, as his $14 million guaranteed is less than Revis' base salary in 2014. The signing doesn't make the Revis trade any better, it was still terrible for Tampa Bay, but it will at least lessen the blow on the field.

T.J. Ward heads to Cleveland on a four-year deal worth $23 million

The Broncos had a major hole at safety and filled it with one of the best players on the market. To top it off, they did it with a below market contract. Ward was the consensus No. 2 safety on the market. While Jairus Byrd signed for an average of $9 million a year and $28 million guaranteed over six season, the Broncos reeled in Ward for $5.75 million per season with $14 million guaranteed. The average annual salary won't even put Ward among the 15 highest-paid safeties. Ward was coming off a career-year where he was named a second-team All-Pro, yet his deal is still very team friendly.

The hottest of free agency #hottakes. This is parody ... we think.

Mass exodus out of Kansas City

Several of those departing players likely got overpaid, and Kansas City may be better off in the long run, but that doesn't eliminate the fact the Chiefs lost a lot of talent. According to Chris Wesseling of NFL.com, the five departing players combined to play more than 3,000 snaps last season. Kansas City could certainly fill those holes, and even upgrade in a spot or two, but doing so won't be easy. Building quality depth is one of the hardest, yet most crucial things in the NFL, and the Chiefs' depth was just decimated.

On the bright side, Kansas City will be rolling in compensatory picks next year.

Speaking of McCluster, he landed a three-year deal in Tennessee. The contract is worth $12 million, including $4.5 million guaranteed. That is a lot to pay for a marginal slot receiver and solid return man. McCluster is more of a gadget player on offense and not a go-to threat from the slot. He does add a lot of value as a punt returner, but probably not $4 million a year worth of value.

If McCluster is going to live up to his deal, he'll have to add more value as a slot receiver than he has thus far during his career. Tennessee would have been better off paying Andrew Hawkins to play the slot. He received a four-year $12.2 million offer with roughly $4 million guaranteed, according to Albert Breer. 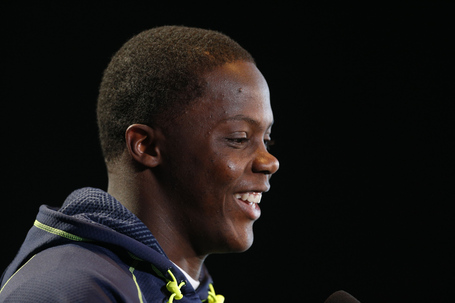 Dan Kadar and Matthew Fairburn teamed up to bring you a full three-round mock with Teddy Bridgewater on top.

New Orleans landed arguably the top overall free agent, so why did the move fall under the "ugly" section? The reasoning has less to do with the player and more to do with the contract. Byrd is an excellent player -- one of the best safeties in the NFL -- and in a vacuum the contract isn't terrible, even if it is a bit rich. But, NFL teams don't operate in a vacuum, and by making the deal in their current position, the Saints just mortgaged their future.

The Saints spent the weeks leading up to free agency releasing more than a half-dozen contributing veterans just to scramble to get under the salary cap. They had roughly $3 million in cap space heading into free agency, with still the Jimmy Graham issue to resolve and free agents and draft picks to sign. So naturally, the Saints handed out one of the richest deals in free agency.

With a six-year deal the Saints can structure it to keep the initial cap hits low, pushing the problems down the road. That was the same strategy they took with Drew Brees. According to Over The Cap, Brees will count $18.4 million against the 2014 cap, $26.4 million in 2015 and $27.4 million in 2016. Dealing with one mammoth contract is hard enough, but now the Saints have two and will have three if Graham signs. New Orleans was already forced to shed contracts to deal with the cap, and that problem is only going to get worse.

3/12 update: The Raiders say Saffold failed his physical and will not be signing with the team, per CSN's Scott Bair.

While their rankings varied, there was a general consensus among most that Jared Veldheer, Branden Albert and Eugene Monroe were the three best left tackles on the free agent market. The Raiders had one of those players on their roster last season, only to let him walk on Tuesday then turn around and hand out the second-richest offensive lineman contract to a player who wasn't in that consensus top three.

Saffold is not a bad player, he had a solid season last year and has experience playing on the left side. He's versatile and solid when healthy. Health, however, has been an issue, and few, if any, expected him to receive a deal worth more than Monroe or Veldheer. Let Levi Damien of Silver and Black Pride sum up why this move made the ugly list:

Saffold has missed 17 games in four seasons and has played a full season just once. Veldheer hadn't missed a game prior to last season and had started 42-straight games.

It's a bizarre move that could seriously backfire on Reggie McKenzie and the Raiders. Teams are built through the draft and keeping their own good players. Veldheer was both of those things and the Raiders tossed him out like trash and paid a lesser player more money.