Wonderlic scores, character concerns and funky college systems that won't translate to the NFL ... we imagined how an NCAA bracket might look if anonymous NFL sources made the picks. 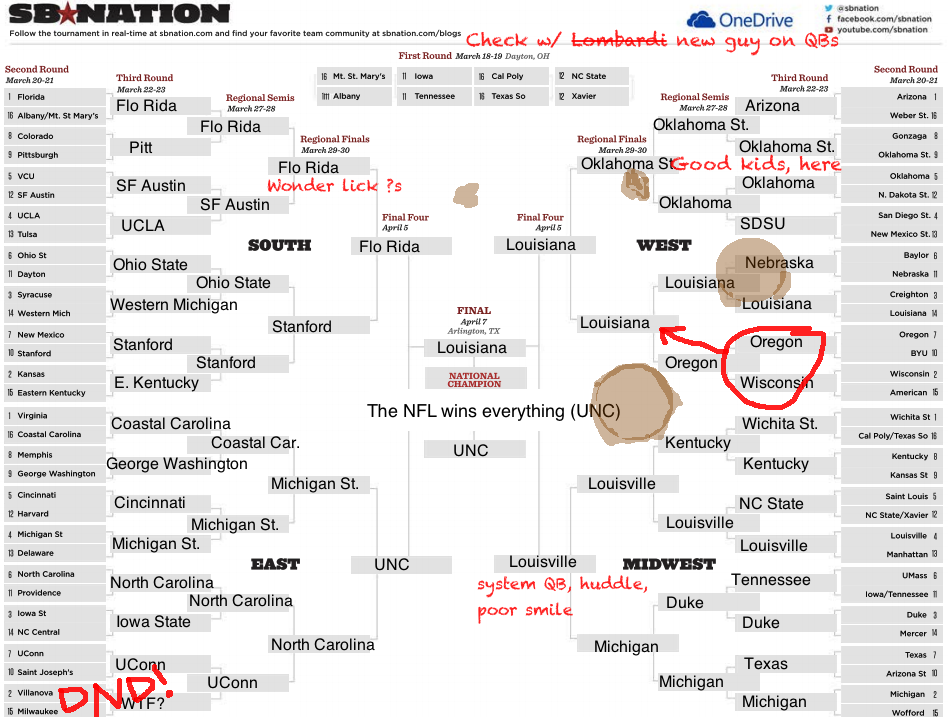 Notable games from the round of 64

Florida vs. whoever - A Pouncey here, an Elam here, these players are tough, high character kids year in and year out in the NFL. We're told that NFL scouts believe the basketball team is just like the football team, and a ferocious style of hitting is going to take this team far.

UCLA vs. SF Austin - Keep an eye on this SF Austin team, said one personnel exec. This is a gold mine for UDFAs, and if you pull a starter out of this bunch, you've earned a seat in Ted Thompson's war room.

Creighton vs. Louisiana - "Why in the hell do they have this LSU team seeded so low," asked one general manager we spoke to on the condition of anonymity.

Texas vs. Michigan - This was a tough one, but one personnel man advised us never to bet against the school that produced high-character guys like Chad Henne and Jake Long. He added, "Mack Brown's kids came to the league ready to play. I just can't tell what this Charlie Strong guy's going to do, not until his kids start producing in the NFL, same goes for basketball."

Notable games from the round of 32

Ohio State vs. Western Michigan - "About as close to an NFL game, if the NFL did basketball, as you're going to get. These guys are all heart and gristle," said one long-time head coach.

Cincinnati vs. Michigan State - League sources expressed concern about Gary Harris' shoulder. He'll play in the tournament, but team doctors are going to have to give him a closer look at the Combine to keep his draft stock from slipping.

Oregon vs. Wisconsin - Character counts; don't let anyone tell you otherwise. And NFL personnel persons love the Badgers for that very reason. "There's a right and wrong fit when it comes to NFL locker rooms," said one anonymous GM. "And you'll gladly take a former Badger towel slapping your players into submission, but this Oregon team's just a better college system for winning games right now."

Ohio State vs. Stanford - "These Stanford guys are reliable on the field AND in the classroom," one NFC head coach said. "I figure the Wonderlic thing is even more of an advantage when it comes to basketball, right?"

North Carolina vs. UConn - UNC's football program has really caught up to its basketball program for cranking out top-tier pro talent. At least 75 percent of the brackets in every NFL front office pool is going to have UNC in the Final Four for that very reason.

Kentucky vs. Louisville - Things we think we think, it's hard to pick against Kentucky, but Peter King himself said Louisville's fourth seed is a joke. The Cardinals are the pick here, and you need a fancy data site to tell you that, I think.

Oklahoma vs. Oklahoma State - This is a tough one for scouts, who don't like to pick against great kids and the alma maters of soon-to-be elite quarterbacks like Brandon Weeden and Sam Bradford. An up and down season never stood in Weeden's way, and it won't bother Marcus Smart when his time comes in this tournament.

Florida vs. Stanford - "This is like the battle for the heart and soul of the NFL locker room," one long-time exec said via text message.

Oregon vs. Louisiana - "Oregon's system is a gimmick, good enough to get them this far, but not enough to win a championship," was the line we heard from more than one NFL coach and media member. The NFL coach we talked to also insisted that this was in fact LSU. When pressed he said, "how many goddamn schools do they need in that state?"

Louisville vs. Michigan - Teddy Bridgewater's draft stock wasn't the only thing Mike Mayock was panning after his pro day on Monday. All of Louisville got marked down a notch because of the NFL Network draft pundit's ability to set the Zeitgeist is just that strong. But they've got just enough to edge Gerald Ford's old school.

Florida vs. UNC - "There's just too much talent up front on that UNC team," said one scout. "ALL sports are won in the trenches."

Louisville vs. Louisiana - When it comes right down to it, questions about Teddy Bridgewater in the huddle and his smile are just too much to overcome, even for the basketball team. "Son, you just don't bet against LSU, even in basketball," said another confused NFL scouting director.

UNC vs. Louisiana - By the time this game rolls around, you'll be too fixated on leaked Wonderlic scores, drug test rumors and Nolan Nawrocki's latest mock draft to care.