Or the time the Dallas Cowboys weren't sure about this whole social media thing.

Share All sharing options for: The best first tweets in NFL history

As if there wasn't enough happening on the internet today to keep you hiding from the boss' watchful eye, Twitter unveiled it's first tweet thingamajig on Thursday morning. It's at least six hours old already, so it's way past it's expiration date for the very platform it documents. But that's not going to stop us from having some NFL-related fun with it.

The Official Twitter Page of Michael Vick and MichaelVickZone.com...

@mikevick show me some love bruh this my new twitter

Yeah, that one seems about right.

Hola Twitter Universe! I don't have any followers yet so I guess I'm tweeting myself?? I need to investigate how this operation works

Little did we know "tweeting himself" would take on a whole new meaning soon enough.

In true Florio fashion, his wild speculation was way off. The game he was talking about was a Week 11 tilt between the Giants and the Ravens. New York lost in the Divisional round; Baltimore in the AFC Championship. Pittsburgh beat Arizona to the SUPER BOWL that season. Both teams were 6-3 at the time of PFT's first tweet.

@ProFootballTalk I thought the real refs were gonna put a stop to every concussion hit?Oh they suck just as much,, yea that's what i thought

Strong takes from the start.

Alright, this could get old really fast, so let's just cut right to the chase. The best first tweet, from the NFL world at least, was this one ... 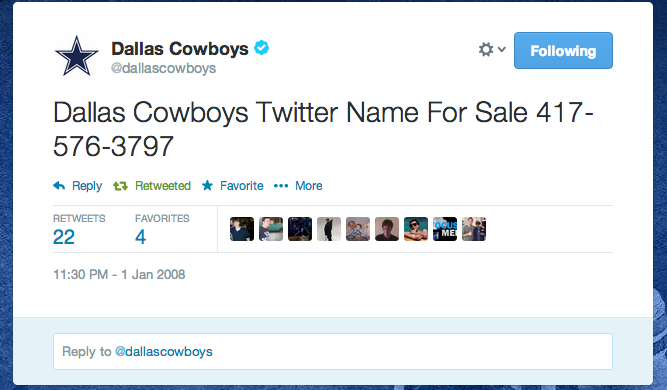