Did the Raiders get the right quarterback in Matt Schaub?

Michael Vick, Josh Freeman and Mark Sanchez all may have been available to Oakland. Is Matt Schaub the right guy for the job?

Share All sharing options for: Did the Raiders get the right quarterback in Matt Schaub?

The Oakland Raiders may have surprised a few teams with solid play during the 2013 season, but when the season ended, a 4-12 record was about what was expected, and it's where they ended up. With the No. 25 passing offense, No. 12 rushing offense, No. 28 passing defense and No. 13 rushing defense, they were consistently bad in one aspect and consistently decent in another.

But the passing offense was the worst of all, even if it didn't rank as low as the pass defense. The fact that the Raiders actually gave Terrelle Pryor the most pass attempts on the roster made it clear the team was grasping at straws. With seven touchdowns against 11 interceptions and a completion percentage of 57.4, Pryor is clearly not the answer.

Matt McGloin, while better than expected, put up eight touchdowns and eight interceptions and a 55.9 completion percentage. He's clearly not the answer, either. Oakland has been in a constant period of transition, purging bad contracts from the team and generally freeing up cap space in whatever way possible. They were never expected to compete last season.

That can't be the case going forward, though. They've started to spend money again in free agency, and that means they can't go into a season expecting to start either Pryor or McGloin. There's talent on that roster, but it will go nowhere without a starting quarterback.

In recent weeks, we've heard talk that the Raiders "had a good idea" of the guy they wanted to start for the team in 2014, and on Friday, the likely player became known: former Houston Texans quarterback Matt Schaub. Oakland traded for Schaub, sending a late-round pick for his services. It's an interesting development, and not one that was entirely expected.

That's because Schaub hit a wall last season, putting up the worst numbers of his career before being replaced in the lineup. On top of that, the market has included a few players whom some would consider potential starters in former Tampa Bay Buccaneers and Minnesota Vikings quarterback Josh Freeman, former New York Jets quarterback Mark Sanchez and the newest Jet, Michael Vick.

Each of the four has their strong points and their weaknesses, to be sure. Freeman is younger and has the potential to get a grip on things and rebound with the right coaching staff, Vick has probably played the best of the three in recent years, Sanchez is also young and has performed better than Freeman, and Schaub has had the most long-term success when you subtract his 2013 campaign.

Did the Raiders make the right decision? Below, we'll take a look at all three players and what they've done lately:

Freeman, a first-round pick by the Buccaneers in 2009, has had a couple good seasons and some truly horrible games to his name. His best year game with the Buccaneers in 2010, when he completed 61.4 percent of his passes for 3,451 yards with 25 touchdowns against just six interceptions. 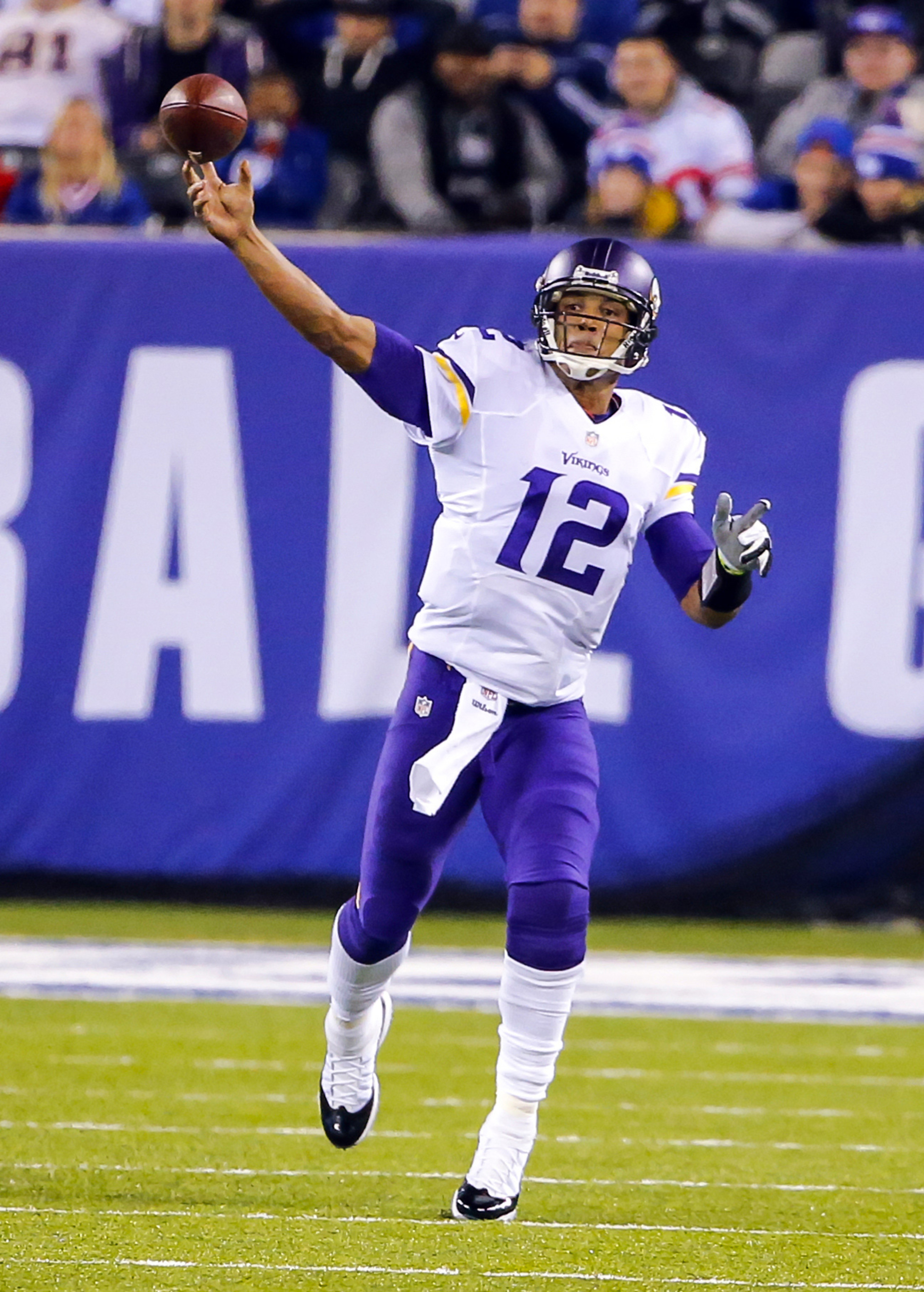 After that season, he was pegged as a rising star, but he hit a wall in 2011, throwing 16 touchdowns against 22 interceptions. His accuracy only dipped from there, though his 54.8 completion percentage in 2012 was eventually offset by tossing 27 touchdowns to 17 interceptions.

Things got ugly last year, when the Buccaneers and Freeman had a public divorce that ended with his release and his signing with the Minnesota Vikings. Freeman had thrown two touchdowns to three interceptions with a completion percentage of 45.7 in three games with the Buccaneers before his release, and his one game with the Vikings was not any better.

In that game, which came shortly after his signing, he completed 20 of a whopping 53 passes for 190 yards with no touchdowns, an interception and a completion percentage of 37.7. It was nasty, it was an ill-informed decision for the Vikings, and it likely killed any interest teams had in Freeman heading into this offseason.

So really, the numbers don't favor Freeman when it comes to "potential starter" appeal. What does appeal is the fact that he's young, cheap and is only a few years removed from being a first-round draft pick.

Vick was the top top quarterback on the open market, but he has since signed with the New York Jets. One can assume, however, that Vick would have been an option for the Raiders if they wanted him -- after all, they've agreed to pay Schaub $10 million in base salary next season by trading for him. So we'll take a look at Vick, regardless of the fact that he's no longer available.

Vick has had a long career that's been ... unique to say the least. But we're just going to focus on his time with the Philadelphia Eagles from 2009 through 2013. Vick originally went to Philadelphia as a backup, but took over in 2010, playing in 12 games and throwing 21 touchdowns to six interceptions, with 3,018 yards and a completion percentage of 62.6.

Unfortunately for Vick, he went downhill from there. Injuries and a drop in accuracy limited him over the last three seasons, with 13 games played in 2011, 10 in 2012 and seven in 2013. He threw five touchdowns against three interceptions with 1,215 yards and a completion percentage of 54.6 in the seven games last year.

Those numbers aren't great, but he might have actually been in line to start next season if not for his injuries. He played well enough to keep the job, but when Nick Foles took over during his injury and broke out, Vick was put on the bench. Now Foles is the franchise quarterback in Philadelphia.

Vick wanted to start somewhere in 2014, and likely feels that he has a shot to do so in New York. But if the Raiders had been interested, Vick surely would have been able to start a year or two in Oakland while the team combs the draft for its quarterback of the future.

Sanchez was not available for much of the offseason by means of being a free agent, but it was thought throughout the process that he was always available as a potential trade option. The Jets released him on Friday, shortly before signing Vick, and the Raiders had been linked to Sanchez at one point. In other words, they likely could have acquired his services.

Sanchez started four seasons with the Jets since being made a first-round pick in 2009, finally being benched last season. He's led the team to winning seasons and has never had an issue scoring. The biggest problem: He's also never had an issue turning the ball over. If you wanted to sign a quarterback based on who is the best at making silly turnovers, Sanchez would be your guy.

Everything you need to know

Having never posted a completion percentage over of 57 percent, Sanchez' best season came in 2011, when he threw 26 touchdowns and 3,474 yards against 18 interceptions. He also had four fumbles that season. Sanchez has had fumble totals of eight, five, four and nine in his four seasons, meaning he's outpaced his turnovers with touchdowns just once in his career -- in 2011.

But many have suggested that he needs a change of scenery in recent seasons. The Jets replaced Sanchez with rookie Geno Smith in 2013, and the team wasn't exactly better off for it. Sanchez is still young and has a big arm; he just needs to go to a positive environment.

Well, when you lay out the other possible candidates like that, it doesn't look like the Raiders made much of a mistake bringing in Schaub ... or did they? Schaub had been with the Texans since 2007 and was a starter for virtually his entire time there. Injuries limited him some, but it wasn't until last season that he was benched for his performance.

Although not an elite NFL quarterback, Schaub gives the Raiders a massive upgrade at quarterback with low long-term risk.

In 2012, Schaub thew for 4,008 yards and a completion percentage of 64.3. He also added 22 touchdowns and 12 interceptions for one of the best seasons of his career. He led the Texans to the playoffs and was clearly among the quarterback elite in the league. But then 2013 happened -- he played in 10 games and threw 14 interceptions to his 10 touchdowns. On top of that, he threw multiple interceptions returned for touchdowns, in consecutive games that cost the team big time.

Houston did not recover from the slump that Schaub initiated early in the season. It was easily the worst season of his career, and the Texans could not keep him on the roster at his cap hit. Most believe Houston will address the position in the NFL Draft, given that they have the No. 1 overall pick.

Schaub is only one season removed from being an elite quarterback. For a team like the Raiders, he certainly seems like a sound investment. The only real issue with it is that the investment is pretty sizable. Oakland gave up a late-round pick for Schaub, but they also will have to pay him $10 million in base salary, and he carries a cap hit of $14.5 million.

Either way, of the options available -- Vick, Freeman, Sanchez and Schaub -- only one of them was truly "elite" in recent times. Vick was solid while Freeman and Sanchez were both young and terrible last year, but Schaub could easily just have been a guy running into some bad luck over the course of a few games. Whether or not they really picked the right guy won't be known until the season is over, but for now, it looks like a good move.