Michael Vick, Matt Schaub and the hopes for second-chance quarterbacks

Who has the best chance at succeeding?

Share All sharing options for: Michael Vick, Matt Schaub and the hopes for second-chance quarterbacks

There's no such thing as an under-used sports cliche, and "change of scenery" certainly sees its fair share of usage during any free agency period. Usually, it's meant to imply some sort of magical change that takes place in a player after leaving the city they had been in for quite some time.

The reality? "Change of scenery" is much closer to what happens when a player who has struggled under a certain type of system with a certain set of players goes to a new system with new players.

Alex Smith made the best of his new home last season, leaving behind his spot on the 49ers bench via trade for a starting position with the Kansas City Chiefs. The Chiefs are reportedly working on getting him an extension, and it looks like Smith has a more permanent landing spot.

There are three veteran quarterbacks attempting to achieve the feat this year -- Matt Schaub, Michael Vick and Josh McCown, who have joined the Oakland Raiders, New York Jets and Tampa Bay Buccaneers, respectively.

Two of the three already have their competition in house -- Vick will have to beat out Geno Smith for the starting job, while McCown will compete with Mike Glennon in Tampa Bay -- while Schaub will likely receive competition from an early Oakland draft pick.

Vick was signed by the Jets in late March. The team released Mark Sanchez as well, making it very clear the new direction they want to head in. Vick was considered the best quarterback available on the free agent market (and by a fairly wide margin), and he'll give incumbent starter Geno Smith a definite run for his money.

As Mark Sandritter writes, the move completely changes how the Jets can handle the young Smith's development.

The Jets may still decide to start Smith and further his development, but Vick gives them a legitimate backup option. If Smith struggles, Vick gives the Jets a reason to make a change. Benching Smith in favor of "seeing what Sanchez can do" wasn't an option after years of Sanchez failure. Who would that benefit? With Vick, he's proven the ability, even at times last season, to play at a very high level. It may be attempting to catch lighting in a bottle at this stage of his career, but at least high-level quarterback play is something to gamble on.

Vick does not appear to be the Jets' first option -- that's still Smith -- but the team now has a clear backup plan to their young quarterback as well as a mentor figure who has been one of the most successful quarterbacks in the league in the past decade. He had one of his most efficient seasons of his career under new head coach Chip Kelly last year in Philadelphia, averaging a career-high 8.6 yards per attempt and 8.5 yards per rush (best since his rookie season), and is still a viable option at the position.

McCown is an interesting one -- he's teaming up with former head coach Lovie Smith as they both move from Chicago to Tampa Bay (with over a year off in between for Smith), a year removed from the most successful season of his career. At 34 years old, McCown brought up an actual quarterback debate in Chicago, outperforming Jay Cutler and throwing 13 touchdowns against one interception in just eight games played (and five starts).

Like Schaub (more on him in a moment) to the Raiders, the move is to provide Tampa Bay with security, Sander Phillipse writes.

The Bucs and Raiders want to win, now. The Bucs because they have the talent to do so, the Raiders because everyone's going to be fired if they don't start winning. These teams can't afford to have their seasons torpedoed because their quarterback is not up to snuff. They can't afford to start a rookie passer they overdrafted because of need. They certainly can't afford to gamble that the quarterback they like will even fall to them -- what do you do if you only like Blake Bortles, but the Houston Texans take him first overall?

Tampa Bay's other option is Mike Glennon, but Smith has already shown that he seems to prefer the veteran -- at least for now. 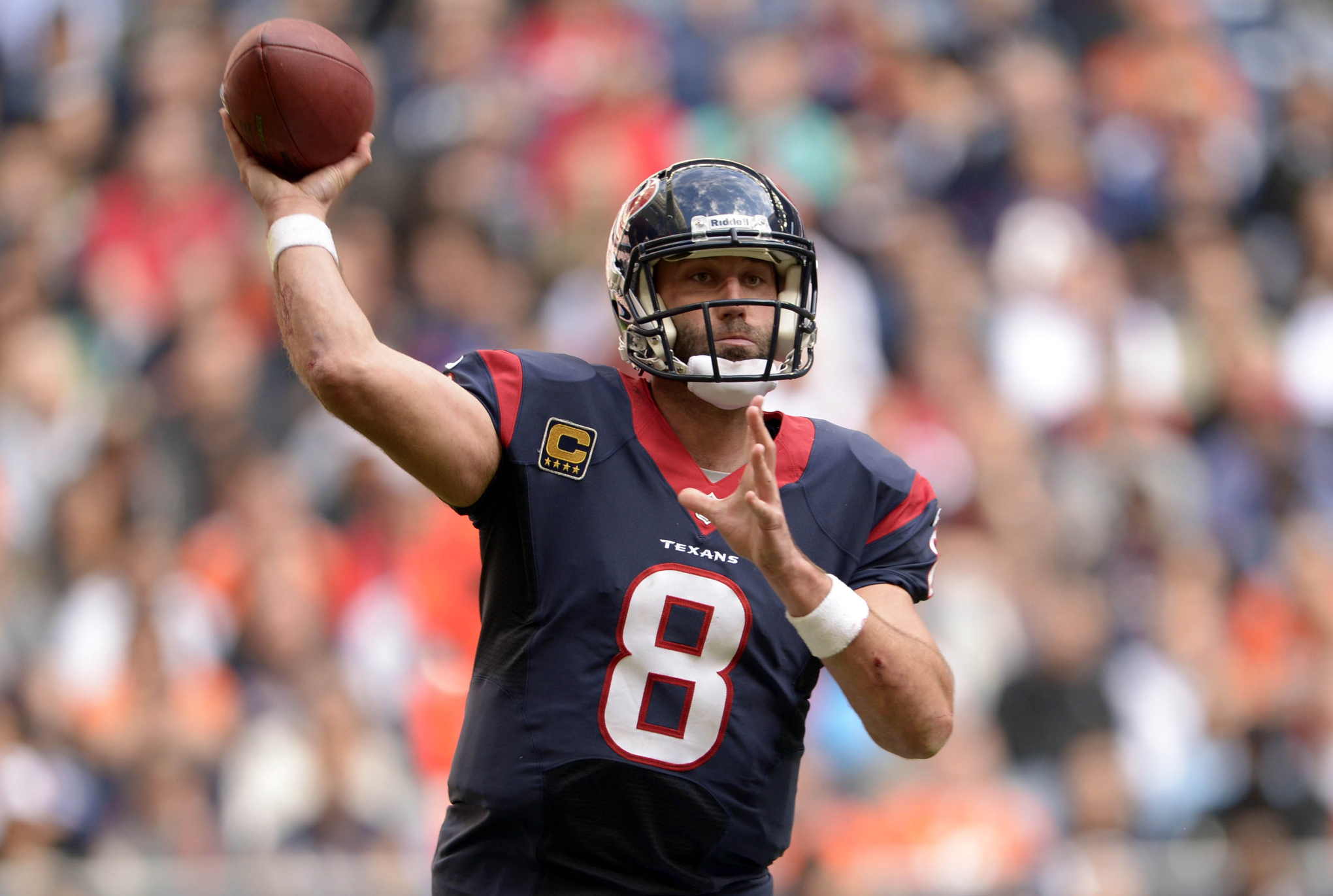 Oakland traded for Schaub, keeping his deal intact, which means they will be paying him a starter's salary. Whether they end up picking a top prospect like Johnny Manziel in the first round or waiting until the later rounds for a quarterback, Schaub will almost certainly be the favorite to start Week 1.

Schaub spent the first three years of his career in Atlanta, as the backup to (funnily enough) Vick. He was traded to Houston in 2007, and started 88 games over a seven-year career with the Texans, with two Pro Bowl seasons and one (2009) in which he led the league in yards (4,770). He struggled (along with the rest of the Houston team) in 2013, throwing 10 touchdowns against 14 interceptions.

Who has the best chance of succeeding?

McCown. Along with Schaub, he has the best chance of starting, but he also has a much better unit around him (as well as head coach with whom he has significant history). If Vick wins the starting job over Smith, this may change, but looking at the teams and how they are built at the moment, it's hard not to give McCown the edge.