It doesn't matter who a team CAN pick when they're on the clock. What matters is who they SHOULD pick based on arbitrary historical data.

Let's be honest, Pro Days are just an excuse for NFL scouts to pad their expenses and take advantage of some sweet per diem. You think they want to go to Tallahassee to watch a bunch of dudes exercise? They've got tape. Pro Day is a scam, so don't fall for it by overanalyzing it. Stick with Numerology, the draft analysis we admit is for suckers!

Has Cleveland picked here before? Yes to the former, as the Browns took Gary Collins with the fourth pick in 1962. Two years later, he caught three touchdowns in Cleveland's NFL Championship Game win over the Baltimore Colts, which was the last time a major professional team from Cleveland won a title. And the 1964 Draft was the last time the Browns had the 26th pick (though it was a second rounder at the time). They spent that pick on LSU tight end Billy Truax ... who was released before playing a single regular season snap. A terrible waste of an excellent last name.

What positions usually get drafted at these spots? Nearly half of the last 30 players drafted fourth overall play on the line, seven on offense, seven on defense. Only once has this pick been used on a defensive back in that time, 1998, when the Oakland Raiders selected Heisman Trophy winner and future vineyardman Charles Woodson.

See, here's a picture of Woodson doing something vineyardy. 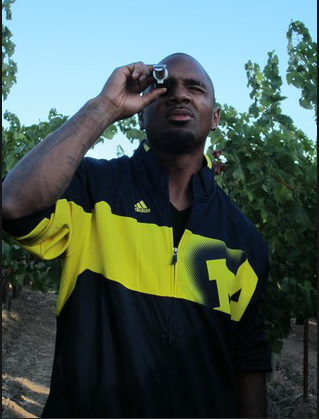 The 26th pick is also line-heavy, specifically on defense (10 of the last 30 selections), but let's continue the Michigan theme and highlight arguably the best player selected 26th since 1984. That would be quarterback Jim Harbaugh, and, yes, I know what you're thinking, Cleveland. You can draft Harbaugh here and dare the league to stop you. HE'S ALL YOURS NOW AHAHAHAHAHAHAHAHAHAHA!

The Class of 2014 turned 13 in 2005. What were the No. 4 and No. 26 movies at the box office that they went to see (with a chaperone as necessary)? The fourth most popular movie of 2005 was War of the Worlds, and the 26th was The Dukes of Hazzard. I'm sure the fact that these are both forgettable remakes of decades-old material means new and exciting things are in the cards for the Browns.

What does a cardboard cutout of Troy Aikman think about these numbers? 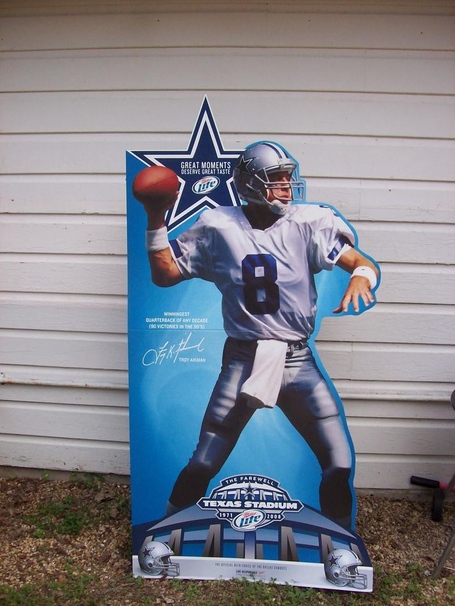 "Numbers are meaningless to me. You use them to count the hours and days of your life, to separate distinct events. For me, there is no division. No separation from one moment and another. I am frozen forever in time, always ready to throw this ball, and never actually releasing it. My existence is a prison."

Have the Steelers had this pick? Twice, in 1991 and 2007. They took a linebacker both times, and that means they're obligated to keep that streak alive and take another one this year. I'm pretty sure that's in the rules. 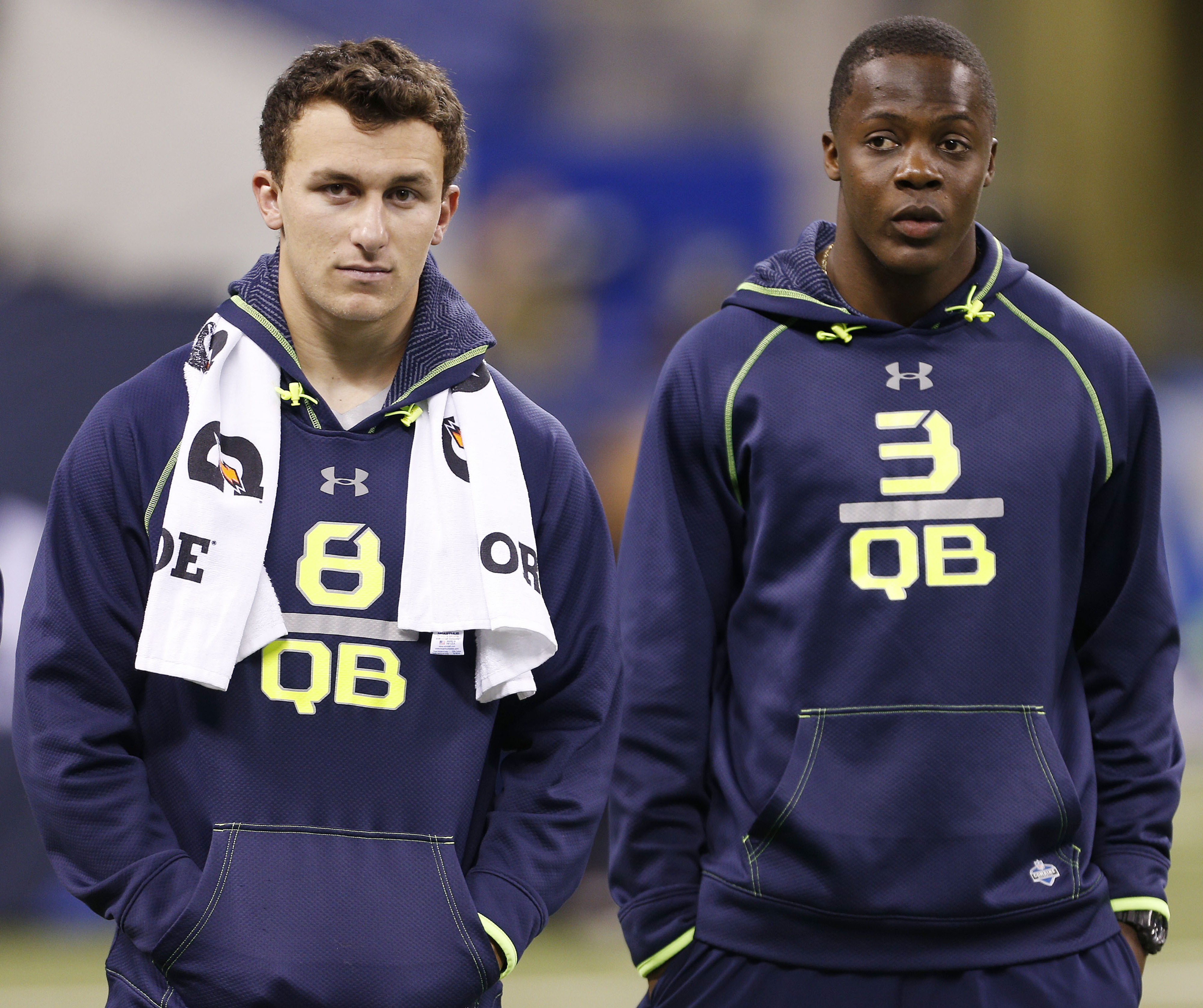 In our latest mock draft, one of the quarterbacks takes a small slide.

Who's usually picked here? Eight of the last 30 selections with the 15th pick play linebacker, although as we've seen, that's partially due to Pittsburgh stacking the deck. Take the two they drafted out and the top position becomes defensive line, which seems to be the most (or second most) frequently taken position at every spot. Is the NFL secretly just nothing but defensive linemen playing every position? Is Matt Cassel actually a pass-rushing end? That would explain a lot.

What was the 15th most-seen movie in 2005? The animated film Robots, apparently, and one negative review for it on IMDB starts this way:

"I wanted to see Sin City, instead, I saw Robots."

What does an anonymous interviewer have to say about 15? 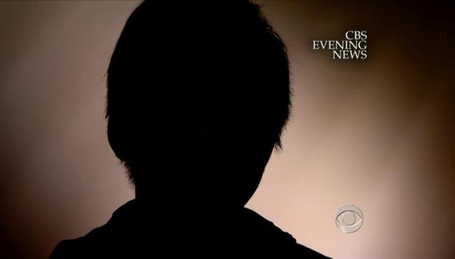 "I just felt it was important to come forward and let the public know, but I have to protect my family. If the company finds out who I am, I don't know what they'll do. But the truth matters, and I've brought documents that proves the balls in every Chuck E. Cheese ball pit come pre-soaked in urine."

"Wait, what were you asking me?"

Any previous picks by the Ravens at 17? No, though they've had the 18th once (Joe Flacco in 2008) and the 19th once (Kyle Boller in 2003). Always remember that Ozzie Newsome may be one of the league's best at assembling a roster, but he willingly drafted Kyle Boller in the first round.

Who gets drafted most often here? Linebackers make up seven of the last 30 picks in the 17th spot, but let's give credit to the Oakland Raiders for using this pick in the 2000 Draft on Sebastian Janikowski, Thick Kicker. Sebastian Janikowski would attempt a field goal in any situation you asked. 85 yarder? In the snow? Blindfolded? Wearing flip flops? LET BASSY HAVE A GO!

And the 17th ranked movie by ticket sales in 2005? That would be The Pacifier, in which Vin Diesel plays a Navy SEAL who has to be a live-in babys -- you know what, nobody cares. This is why I'm fine with every Hollywood movie being a remake or a comic book adaptation.

What does your local deli counter guy think about the number 17? 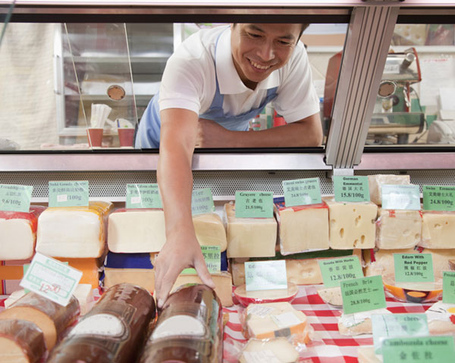 "The 17? That's a seeded roll with turkey, ham, provolone, brown mustard, tomato, onion, lettuce, and banana peppers. If you want potato salad on the side that's an extra 75 cents."

Has Cincinnati picked here? Twice, in fact - they took Archie Griffin 24th in 1976 and Johnathan Joseph at the same spot in 2006. Griffin scored 13 touchdowns with the Bengals. Joseph has only scored five. (I should probably point out that Johnathan Joseph is a cornerback.)

Who's usually taken 24th? It's sort of a mix; seven of the last 30 draftees have been defensive backs, but they were all picked before 2008. There are actually a lot of good players who've been taken 24th, including Aaron Rodgers, Steven Jackson, Chris Johnson, Ed Reed, Eric Moulds, Dallas Clark, and Dez Bryant.

What movie was number 24 at the box office in 2005? Are We There Yet?, starring Ice Cube. Never has a movie title so perfectly summed up the Bengals under Marvin Lewis.

What does Ice Cube think about the number 24? 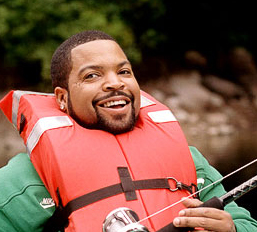 "I had a lot of fun working with everyone on Are We There Yet? It's a great crew, great script, great di-"

"Look, man, just make sure you invest wisely when you're young. You don't wanna turn into this."