Live TV coverage, former presidents and most of the NFL's 32 teams are showing up for Johnny Day. Who knows, we might even see LeBron James and Drake.

It's Johnny Manziel. It's the NFL Draft. It's Texas. Of course Texas A&M's pro day (2.0) is going to be an extravagant, oversized affair.

In a state with a rampant football obsession, there was no doubt that the official NFL audition of the most polarizing player in Texas history was going to outshine every pro day that came before it. It's getting a live broadcast on ESPN and NFL Network. Governor Rick Perry is expected to show up. George H.W. Bush is rumored to be making an appearance. Capping it all off, the team holding the No. 1 pick in the draft, and therefore potential dibs on Johnny Football, is the Houston Texans. The only things that could make this hootenanny any more Texas are a rodeo, Chuck Norris and Hank Hill.

To call it "Texas A&M's pro day" isn't really accurate. Most of the Aggies, including first-round offensive tackle prospect Jake Matthews, worked out at the team's first pro day on March 5. Thursday amounts to a private workout for Manziel and fellow first-round hopeful Mike Evans.

Indeed, this is much more than a pro day.

This is Johnny Day.

Which teams will pass on a quarterback?

ESPN will have live coverage beginning at 11 a.m. ET and will also stream online at WatchESPN beginning at 11:30 a.m. NFL Network will broadcast and stream the event as well.

Manziel plans to throw in shoulder pads and helmet

It's Johnny Football day, and he's already making his pro day different than the others.

Manziel plans to throw in shoulder pads and helmet

The man we've all come to see. Despite the countless accolades and records and the Heisman Trophy, Manziel's status as an NFL prospect remains unclear. Draft-day predictions range from the No. 1 pick to outside of the top 10. SB Nation's latest mock has him going No. 9 to the Browns (via a trade with the Bills), behind Blake Bortles and Teddy Bridgewater.

Manziel put up strong measurables at the NFL Combine (4.68 in the 40-yard dash), but elected not to throw. That means Thursday is the first opportunity teams will have to evaluate him up close. His footwork, arm strength and accuracy will all be under a microscope, though how much of that can really be determined from a scripted practice is debatable.

Perhaps the biggest question Manziel faces is his size. He measured in under six feet in Indy, which set off a storm of hot Twitter takes and speculation that he might be too small for the next level. While guys like Drew Brees and Russell Wilson have long since torn down the height barrier, there is some legitimacy to the concern that Manziel's frame may not be able to hold up in the NFL given his propensity for scrambling.

Somewhat lost in all of the Johnny Football hype is the fact that the man on the other end of his passes on Thursday is one of the best receiving prospects in the draft. Evans, a 6'5, 230-pounder with outstanding high-pointing ability and body control, is listed as SB Nation's second best wide receiver and projected as a top-15 pick.

Evans impressed at the combine by running a 4.53 40. While that's not an eye-opener for most wideout prospects, that's damn fast for a man with his size. His 37-inch vertical and 12 reps on the bench press were a bit more pedestrian, but neither number should hurt him on draft day.

Having already cranked out those measurable drills, Evans's sole focus on Thursday will be running routes and catching passes from his quarterback. There's probably not a ton he can do to increase his stock, but any and all exposure helps (and will there ever be exposure).

In addition to Evans, Manziel will be throwing to wideouts Travis Labhart and Derel Walker as well as running back Ben Malena. None of those players are expected to be drafted, but they're picking up a ton of free advertising through this gig. Rolling in Johnny's entourage has it's perks and they certainly don't mind playing the Turtle to his Vince.

A couple months ago, Cleveland was reportedly enamored with Manziel. Following some organizational turnover, the new regime seems less intrigued. Having passed on interviewing him at the combine, new general manager Ray Farmer told the Cleveland Plain Dealer earlier this week that he would not be in College Station on Thursday.

Farmer downplayed a disinterest in Manziel by saying pro days simply don't contribute much to the evaluation process, but that comes after he was spotted at the workouts of Bortles and Bridgewater.

Farmer also explained that he and his staff were purposefully staying away from pro days in order to keep other teams "in the dark."

The notion that the Browns are forgoing scouting trips just to keep other teams from knowing who they're scouting seems like an incredibly Browns thing to do.

It's worth noting that the originator of the term "Johnny Day" is actually Houston head coach Bill O'Brien, who delivered the following gem after being asked by USA Today whether the star would be working out privately for the Texans:

A behind-the-scenes perspective of the NFL scouting process, and how players ultimately land on each team's draft board.

The former Penn State coach said he still planned to meet individually with Manziel and downplayed Manziel's size issues, saying his mobile style of play is "sustainable" at the pro level.

O'Brian wouldn't bite when asked which of the three top quarterbacks were the best fit for the next level and also refused to rule out taking Jadeveon Clowney or trading the top pick away.

If Houston does pass on Manziel, they do so at their own peril: Johnny cautioned back in February that doing so would turn the chip on his shoulder "from a Frito into a Dorito." YOU'VE BEEN WARNED, HOUSTON.

Even after signing Golden Tate to a big free agent deal, Detroit is still rumored to be interested in grabbing Evans. New head coach Jim Caldwell and GM Martin Mayhew left straight for College Station from the NFL Owners' Meeting on Wednesday, according to MLive.

The team was at Clemson's pro day three weeks ago to look in on Sammy Watkins, but getting the draft's top wideout prospect with the No. 10 pick is wishful thinking. Evans is a much more realistic option -- SB Nation's latest mock has him falling to the Giants at the No. 12 spot.

There are more pressing needs for Detroit on the other side of the ball, but can you imagine Calvin Johnson, Tate and Evans in a three-wide set? Plus it's the Lions, so we know they're going to pick a receiver anyway.

It wouldn't be Texas if the Cowboys weren't involved. The Dallas Morning News reported earlier this week that the Cowboys spent one of their 30 combine interviews on Manziel and would consider drafting him were he to fall. Executive vice president Stephen Jones said it was merely due diligence, but admitted that Manziel was an intriguing prospect. 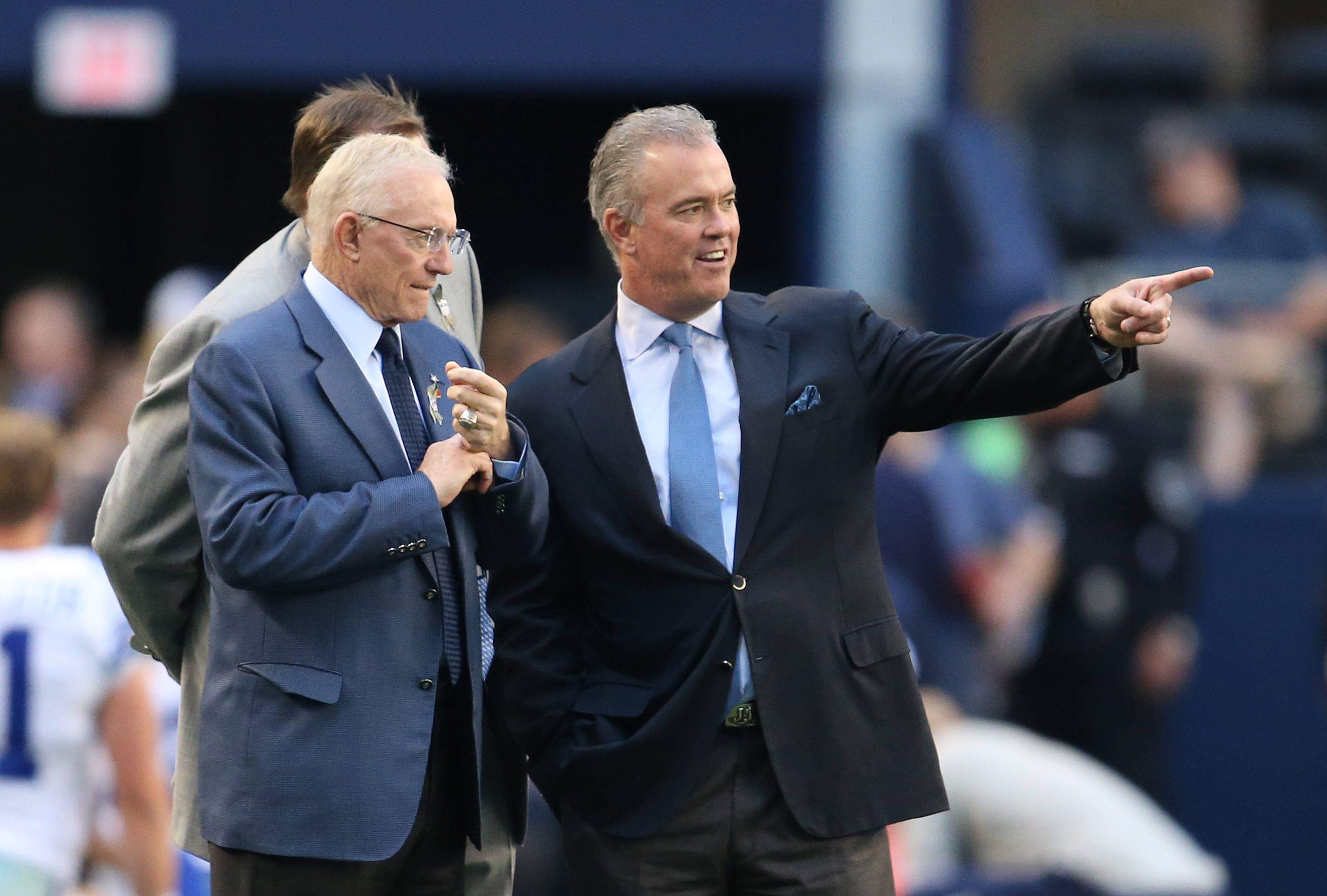 Manziel would have to fall past six quarterback-needy teams to land in Dallas's lap at No. 16 -- a long shot at best. Given the red flags raised over his size and off-field maturity, however, crazier things have happened. Jones cited Aaron Rodgers's first-round plummet to the Packers in 2005.

The real question is: if Johnny was available at No. 16, would the Cowboys take him? Jerry Jones has publicly fawned over him and although Tony Romo's contract structure makes him virtually un-tradeable this year, they could theoretically set up a Rodgers-Brett Favre dynamic.

Of course, that would lead to a public circus that would undoubtedly implode on itself in horrific fashion, which is exactly why everyone in America should be rooting for this to happen. It would be Tebow-to-New York on steroids. The Manziel vs. Romo debate would spark the fiercest conflict seen in the state of Texas since the Mexican-American War. It would be glorious.

No really, George Bush will be there

The whole "presidents and governors" thing wasn't a joke.

Gov. Perry and Pres. Bush 44 are among those expected at Manziel's pro day. Biggest pro day ever at A&M.

Ms. Williams isn't big on presidential history -- she's since clarified that "Bush 44" is actually the senior Bush, who was the 41st president. It's somewhat disappointing that it's not the younger one, though. Johnny Football having a toss with W. would literally be the most Texas thing of all Texas things ever.