Broncos WR Eric Decker is expected to be paid handsomely

The wide receiver is going to be paid, but will it be by the Broncos?

Share All sharing options for: Broncos WR Eric Decker is expected to be paid handsomely

Denver Broncos wide receiver Eric Decker put up a terrific season in 2013, setting career-highs in catches (87) and yardage (1,288) the year before his free agency. In other words, Mr. Decker has good timing.

Decker is expected to get very wealthy on his first tour through free agency, according to The Denver Post. It is expected that Decker will command approximately $9 million per year on a long-term deal, becoming a major financial commitment.

The former University of Minnesota star began his career with two under-the-radar seasons before exploding onto the scene when Peyton Manning became his quarterback. In 2012, Decker notched a career-best 13 touchdowns to go along with 1,064 yards.

With the free-agent market shrinking for wide receivers by the signings of Riley Cooper and Jeremy Maclin, Decker is in an even better position. However, he does enter the open market with other receivers as options such as Golden Tate, James Jones and Emmanuel Sanders.

Last year, Mike Wallace left the Pittsburgh Steelers as a second wide receiver with lesser numbers compared to Decker. Yet, he found a five-year, $60 million deal with the Miami Dolphins including $27 million guaranteed. Dwayne Bowe re-signed with the Kansas City Chiefs, hauling in a five-year, $56 million commitment with $20 million in guarantees. 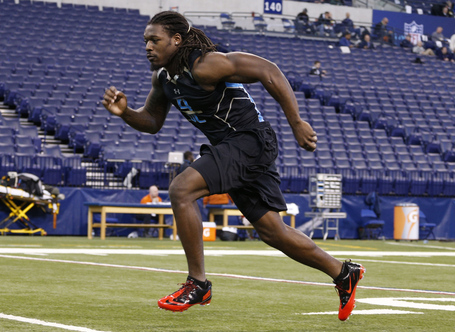 Denver has expressed interest in retaining Decker, but only at the right price. General manager John Elway has said he will let all of the Broncos free agents go through the process, including Decker, running back Knowshon Moreno, cornerback Dominique Rodgers-Cromartie, linebackers Wesley Woodyard and Shaun Phillips, and others.

With only $17.9 million under the cap and a bevy of talented free agents, the Broncos are going to be faced with tough decisions. Denver could open up some more space by releasing decrepit cornerback Champ Bailey, who is slated to make $10 million.

Should Decker leave, the Broncos would still have a great stable of receivers with Demaryius Thomas and Wes Welker in the fold. The problem would be finding a second outside receiver, who currently does not exist on the roster. Decker would be tough to replace, as he ranked 11th at his position, per Pro Football Focus.