How does the Michigan offensive tackle compare to the others in the 2014 NFL Draft? Retired NFL defensive end Stephen White peels back the curtain for a closer look at Taylor Lewan.

Share All sharing options for: The Notebook: Deciphering Taylor Lewan

Former Michigan left tackle Taylor Lewan came into last season as the highest-rated offensive tackle on a lot of analysts' draft boards. That made me want to take a closer look at how he played this year to see how he got passed up by Greg Robinson and Jake Matthews. Or, really, if he had been passed up at all.

For the purposes of this breakdown I watched Lewan play against Notre Dame, Connecticut, Michigan State, Nebraska and Ohio State. Those represented the second, fourth, eighth, ninth and 12th games of Lewan's last season, respectively. The cutup videos can be found at DraftBreakdown.com.

What a shitty offense

So I wanted to focus this breakdown on Taylor Lewan, not the severe annoyance I had with the way Michigan used him. But since it was the one thing that stood out to me the most while watching Lewan play, I am going to go ahead and address it right off the bat. 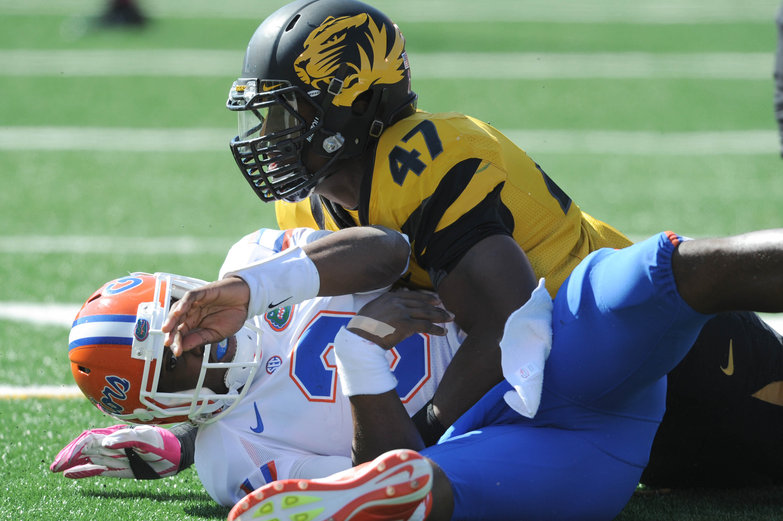 Now look, I don't profess to be some kind of expert on offenses, but some things about football I just feel like should be common sense. For instance, if you have a superior blocker at left tackle, most of your help from tight ends and running backs, whether it be run blocking or pass blocking, should go to the other four guys. It should also allow you to design plays built around his athleticism to help get your skill position players free out in space. Stuff like smoke screens (WR takes one step forward then one step back to catch the ball while his blockers lead up in front of him), or really any kind of screens, counter plays (where you pull the offensive guard and tackle from one side of the center to the other side of the center) and any number of sweep plays (runs designed to get wide outside of the offensive tackle).

I didn't see much of that in the five games that I watched. Furthermore, why in the HELL did Michigan keep a tight end to Lewan's side so damn much? He obviously didn't need the help. The quarterback was right-handed anyway (with bootlegs you like for the tight end to be lined up to the side of the quarterback's throwing hand), and they could have potentially had a wide receiver there instead of a tight end. It would've increased the chances of success on passing downs as well as run downs if you get the opposing defenses to spread themselves out. But is that what Michigan did?

Here is the scenario I saw time and time again. So you have a tight end helping before he goes out into his route. Lewan, who doesn't need the help any damn way, blocks the hell out of the edge rusher. But the rest of Lewan's buddies on the Michigan O-line aren't quite as, well, good as he is, so the quarterback is under pressure and ends up sacked.

A) Even if the tight end ran a hot route, it's not to the right-handed quarterback's front side vision.

B) After chucking the rusher, the tight ends were still trying to get open with the rush bearing down on the quarterback.

I'm sure some of y'all are asking why in the hell any of this matters in a breakdown about Lewan. Here's why: the fact that Michigan was so reluctant to put its best offensive lineman out on an island made it harder for me to actually assess how he played. Or, more importantly, it inhibits my ability to project how he might play in the NFL.

If ifs and buts were cans of nuts ...

Lewan looked pretty good in almost all phases of his game. He comes off the ball hard when he run blocks. He has a great (not hyperbole) kick step that he is very consistent with when he is pass blocking. Lewan played with damn good technique overall. I only saw 10 times in five games that he was beaten on a pass rush. Not "beaten for a sack," beaten period. That's pretty damn good.

Until you consider how many of those plays Lewan benefited from having a tight end to his side.

Basically, Michigan was cheating lining up a tight end to Lewan's side. But it was the stupidest kind of cheating ever.

Good edge pass rushers like nothing more than to get a one-on-one with an offensive tackle. If a tight end is lined up to that side, it complicates things. For one, pass rushers have to be a lot more cognizant of whether it's a run or a pass (nobody wants to get peter-rolled coming off high to do your best speed rush move, only to have the tight end crashing into your ribs on a run block). They have to decide whether to get wider and further away from the quarterback or line up head-on or inside the tight end, and they have to be concerned with him chipping on the way out for his route.

Basically, Michigan was cheating lining up a tight end to Lewan's side. But it was the stupidest kind of cheating ever. While it all but ensured that the edge rusher to his side would not be getting to the quarterback, it also left the rest of the offensive line, you know the guys who actually NEEDED help, hung out to dry.

Maybe I could have just assumed that it didn't matter whether the tight end lined up to Lewan's side or not, but then I would have to discount a few plays where the tight end isn't there and Lewan has trouble handling an outside rush. Like this example from the Notre Dame game or another one in the Ohio State game.

Then there was his run blocking.

I friggin' loved how aggressive Lewan was coming off the ball to run block. It just looked like he had bad intentions every single play.

In five games I only saw Lewan get one pancake block.

The more I watched, the more I didn't see Lewan really move guys off the line of scrimmage much, even on double teams. Don't get me wrong, he consistently made pretty good blocks, but most of them weren't anything to write home about. It was almost like watching a mirage. Everything about Lewan's aggressiveness and effort and, hell, his talent level says that you should see him dominate guys more at the point of attack. But I didn't.

Then there's Lewan in space.

Michigan did throw a few screens to Lewan's side, and he looked great getting out there to make the blocks. Problems started after he actually got out there. If the defender he was trying to block stood there, then Lewan was okay. If the defender made to avoid Lewan, well, he wasn't quite as good at blocking those guys.

So now I have to ask myself whether or not Lewan looked so good because the tight end to his side gave him an advantage or if he could have held up on an island and his coaches were just morons.

What to look for

At the end of the day

No matter what I can't glean from watching Taylor Lewan play, what I did see is that he is going to be a good player.

I saw some technique flaws with Lewan in his pass blocking. He, like Greg Robinson, leans forward a little too much when he tries to jump set rushers right at the line of scrimmage. It can be a good strategy for offensive tackles to jump an edge rusher who isn't prepared; it usually doesn't end well for the rusher. However, when a tackle is too aggressive, skilled rushers can get to an edge, knock the blocker's hands off and use speed to run right by them. 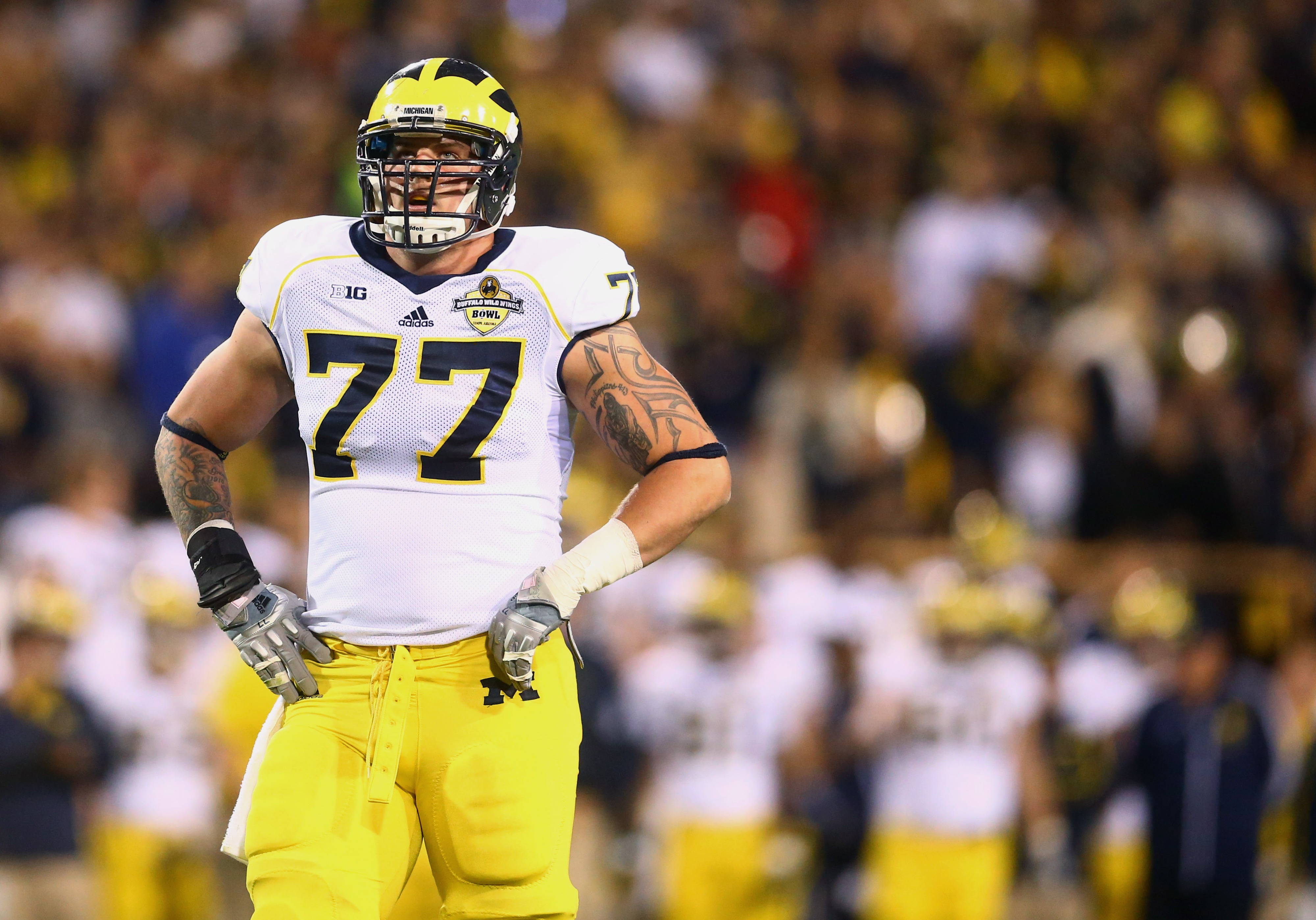 I also saw some good things. I already talked about his kick step, but Lewan was also good at getting his hands inside on his opponents most of the time. Once an offensive lineman gets his hands on you where the refs rarely call holding, buddy, you're usually in trouble! The guys who try to grab the rushers outside their frame (outside their shoulders) are the ones who typically get a lot of holding calls and miss a lot of blocks. So he has that going for him.

Lewan's run blocking wasn't dominant, but it was still pretty good. He sifted up to linebackers pretty well. He also showed that he has the athleticism to pull or lead up on secondary guys in the screen game. He needs to work on not missing his man once he gets to where he's going, but that is something that I believe is coachable.

At the end of the day, Taylor Lewan is a level below Greg Robinson and Jake Matthews, but he also isn't far behind them, still a likely first-rounder. He is a plug-and-play guy who will likely be ready to start from day one. I just don't think he will ever be an "elite" left tackle no matter how long he plays.

Here's hoping he proves me wrong.