Don't know how to approach the NFL Draft will all the rumors floating around? Pseudoscience is probably your best bet.

Have you ever taken the time to stop and think about all the NFL Draft rumors floating around this time of year? If you haven't, go read the last week's worth. We'll wait. Back? Feeling empty and unsatisfied, maybe even confused? That's the point. You're just as well off using pseudoscience to predict how things will unfold, so let's jump right into it.

Have the Falcons picked here before? Twice, the first time in 1977 when they selected offensive tackle Warren Bryant, who started for Atlanta in 93 games, and most recently in 2011, when they took Julio Jones after trading away five of their own draft picks and three of Tennessee's to move up in the first round. It's a dirty game, Tennessee, and you should have been keeping closer watch on those picks to make sure somebody didn't swipe 'em.

What position is usually taken here? A third of the last 30 players drafted sixth overall have been defensive linemen, and DAMN there are some mean dudes in here - Kevin Carter, Richard Seymour, Grant Wistrom, Eric Swann, and Corey Simon. Those five alone have nearly 300 career sacks between them. Just reading that makes my ribs hurt. (I am also not very tough, so.)

The Class of 2014 was born a year before the release of NBA Jam. Who was sixth on the league's scoring list that season? Dominique Wilkins, a supremely talented athlete capable of doing things other players couldn't but ultimately unable to bring Atlanta the opportunity to play for a championship. Damn, that's Falcons as hell.

Has Tampa ever picked seventh? Three times, including 2012, when the Bucs drafted Mark Barron. There is a certain poetry to that; despite all the trades and personnel moves, the Bucs started the Greg Schiano era drafting seventh and they emerge from it in the exact same place. It's as if it was all some hypermasculine dream.

Except for the whole MRSA outbreak thing.

Who's usually taken with this pick? The most frequently selected position since 1984 is wide receiver, but the quality seems to have gone down over the years. Observe (and click to embiggen, if it helps): 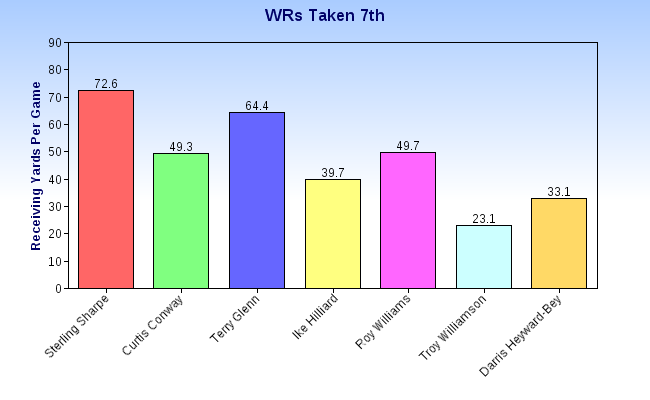 Limited sample size, sure, and maybe Heyward-Bey will pick it up in the second phase of his career, but any time you have to say "hey, Roy Williams, the non horse-collaring one, wasn't so bad!" you know you're reaching.

Who was seventh on the NBA's scoring list in 1993? Former rookie of the year Mitch Richmond, one of 39 players to score at least 20,000 points in his professional career, and MVP of one of the more sartorially unfortunate NBA All-Star Games ever: 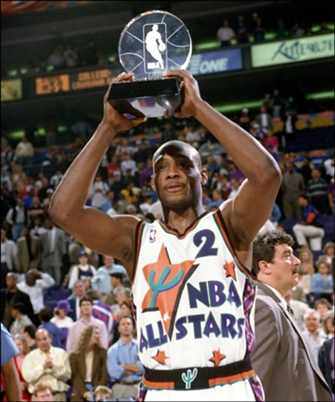 This is is why you don't buy your uniforms at a South Carolina highway rest stop, NBA.

Has New Orleans had this draft slot? In their very first draft, as a matter of fact, when they used this pick in the second round on defensive back Bo Burris. (Being a new team, the Saints were unaware that they were allowed to not pick players from the Gulf Coast region named Bo). Forty years later, they used the 27th pick to take Robert Meachem, the fantasy wideout most likely to have an amazing game immediately after you drop him.

What position is most often taken here? This spot trends heavily offensive; just 8 of the last 30 number 27 picks have been defensive players. And there have been some excellent skill position players taken here - Larry Johnson, DeAngelo Williams, Roddy White, Rae Carr-oh. Yeah, don't draft the next Rae Carruth.

Who was the 27th-highest NBA scorer in 1993? Don MacLean, who went on to become the first NBA player suspended for using PEDs. Fortunately, this isn't a problem the NFL has, as the only performance-enhancer football players rely on are grit, teamwork, and leavin' it all on the field. (That said, if Goodell were to slam a team for PED use, you know it would be the Saints).

Have the Panthers previously picked here? Once, when they selected Chris Gamble in 2004. Gamble went on to become the Panthers's all-time career interceptions leader, though franchise records always feel like a left-handed compliment, like how I tell people I'm the second-handsomest son in the family.

Who is most often drafted 28th? Defensive backs have had their names called the most frequently (eight of the last 30 selections here), but none have been picked since Gamble. Three of the last five picks at 28 have been defensive linemen, which, again, you can't just draft monster pass rushers, NFL GMs. It's the football equivalent of only eating ice cream for breakfast, which, wait, I see your point.

Who scored the 28th most points in the '93-94 NBA season? Gary Payton, a player with which I would RUIN you with in NBA Live 95 on CD-ROM. At least until my mom found out I wasn't doing research on Encarta like I said.