The Notebook: What to make of Ra'Shede Hageman

Share All sharing options for: The Notebook: What to make of Ra'Shede Hageman

Another defensive tackle garnering some buzz after a very good NFL Combine performance is former Minnesota Golden Gopher Ra'Shede Hageman, so I decided to take a longer look at him. For the purposes of this breakdown I watched Hageman play against Iowa, Northwestern, Penn State, Wisconsin and Syracuse. Those represented the fifth, seventh, 10th, 11th and 13th games of Hageman's final season, respectively.

An enigma wrapped inside a mystery

I'm honestly not sure what to make of Ra'Shede Hageman.

He is almost 6'6 and weighs 310 pounds. He has longish arms at 34 1/4 inches long. He is obviously powerful on the field and in the weight room, where he repped out 32 times with 225 pounds. He is also pretty athletic as the interception and short runback he made against Northwestern illustrates.

But he doesn't make very many plays.

The plays he does make tend to be of the big variety, which is a plus. However, none of those big plays were a sack. That's right, five games and no sacks. And nope, he didn't have a bunch of hurries either. In fact, he only hit the quarterback three times by my count in those five games.

He did have five tackles for a loss in those five games, but one of them came at the end of his very average Iowa game. The other four stood out because of the contrast in how he played the run the majority of those games. It was maddening because those plays showed that he could do it, but I couldn't figure out why he didn't do it consistently.

Probably the best thing Hageman did do consistently over the course of the five games was get his hands up and try to knock down passes. I know that this is the new thing for defensive linemen. I get it. A guy that size who maybe isn't a great pass rusher can still help your team by knocking down passes at the line of scrimmage. Hey, a win is a win on third down, I agree on that part.

I don't put a high priority on it, because I just wasn't taught that way. We literally laughed at guys in the film room who we saw stop their rush to try to jump up and knock down passes back in Tampa in the late 90s and early 2000s. We looked at it as a sign that they had given up on ever trying to be a good pass rusher at that point. I mean nothing is wrong with putting your hand up as you are trying to run through the quarterback, but stopping at the line of scrimmage and trying to block the passes from there?

The incredible story of Hageman's rise to the top

The improbable path that took Hageman from foster child to top NFL prospect.

The incredible story of Hageman's rise to the top

I know some folks are about ready to get their #CAPS #CAPS #CAPS on in the comments to let me have it after saying such mean things about knocking down passes. I also know the first name most of them will throw out there will be J.J. Watt.

I love Watt. Yes, he has done a great job of knocking down passes, but you are fooling yourself if you think the monster contract that he is likely to sign in the next two years is more about PBUs than it's about the sacks. Watt is a hellafied pass rusher, but on the rare occasion when he gets stopped at the line, he looks to knock down passes. That's a totally different animal.

So, what gives? Well, it's complicated.

To say that Ra'Shede Hageman is raw would be disrespectful to sushi. The only thing he consistently did well other than knocking down a few passes was getting in his stance. Harsh, but basically true.

Hageman flashed a quick get-off at times, but most of the time he was slow off the ball. His hands were all over the place which prevented him from getting full extension and locking his elbows against the run most of the time. He didn't try any finesse pass rush moves to speak of, and even though he is a big powerful guy, his power rushes weren't all that successful either.

To say that Ra'Shede Hageman is raw would be disrespectful to sushi.

That's because he plays with high pad level (he doesn't bend his knees to stay low) that will get your ass kicked consistently against the run, no matter how big and strong you are. His technique was so poor that I counted at least 23 times when he was out of his gap in those five games. I say at least because there are some plays where it's hard to tell if he is running a stunt or not. On those particular plays there was no ambiguity. It's hard to have success against the run in a 4-3 defense like that.

Now the truth is that when you are that big, strong and quick, you are inevitably going to make some plays. I admit that I laughed and muttered "oh shit" a few times watching him toss guys up on random plays in those five games. Against Northwestern, there are some flat-out hilarious plays where a guard goes flying back so far and fast that it almost looks fake.

After I stopped laughing I got frustrated though, because I asked myself why in the hell can't he do that ALL the time?

I am sure you are expecting me to give Hageman a pass because if he is that raw, it must be coaching. Especially since I called out the coaching for Jadeveon Clowney.

None of the other guys I've broken down so far were close to being as inconsistent with their effort as Hageman. There was one play against Iowa that perfectly encapsulated the Jekyll and Hyde nature of his effort. He fights a double team on a passing play, stays active moving around, the quarterback drops the pass off to the running back and Hageman takes off running to get to the play. He gets all the way out to the running back with a full head of steam and then ...

Look at the play closely, folks. It's not that he missed the tackle. He shut it down effort-wise when he saw someone else make contact with the runner instead of trying to get himself a piece of the action too. What in the hell is that about?

First of all, if you run your ass allllllll the way out there to the ball, why would you deny yourself the reward of blowing up the runner?

I say if because he only ran to the ball some of the time. Other times, like the Penn State game, you might catch him walking while the ball carrier is still getting positive yards just ahead of him.

I understand that Hageman is a converted tight end, which could explain his less than aggressive approach on the field at times. The thing is, he converted like three years ago; it's hard to keep using that excuse at this point. If you're a GM, are you willing to bet your job by taking him in the first round and hoping the light turns on for him next year?

I wouldn't take Hageman in the first round, but you would be a damn fool not to take him in the second round. That might not seem like a big difference to you, but how many times have you heard people have a conversation in the barber shop about "second-round busts"? I'm not sure I ever have. No "worst second-round pick lists" stand out to me either. 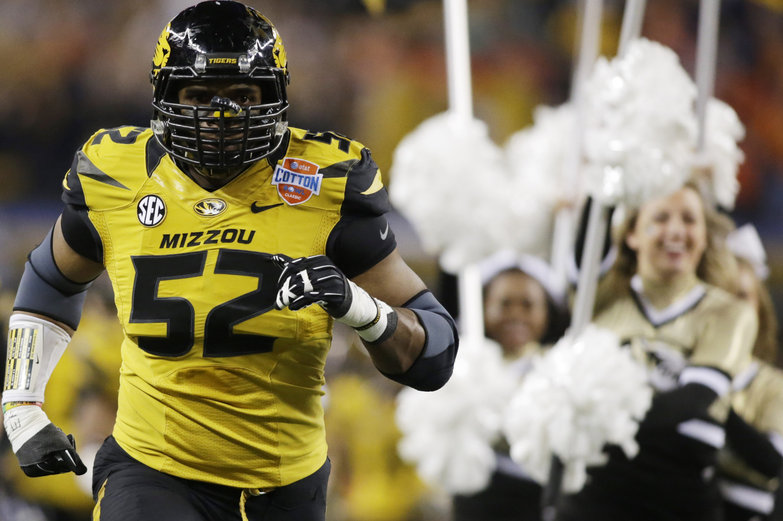 Free from some of the outside expectations of a first-round pick, a team could elect to take a slower approach with Hageman and teach him good technique while rotating him in that first year rather than throwing him out there as a starter right off the bat before he's ready. That could do wonders for his career and really benefit the team long term as well.

There's another reason why I think it will be worth it.

Hageman reminds me of an old teammate of mine, Marcus Jones. Marcus was an All-American defensive end at North Carolina, but he was so big and strong that our coaches in Tampa wanted him to play inside at defensive tackle. That didn't go so well to start. Marcus was close to the same height as Hageman and had a hard time staying low. He also, like Hageman, was a little wild with his hands which hampered his ability to get his arms fully extended when playing the run. Without that full extension, all of that power that both Marcus and Ra'Shede possess goes to waste.

Marcus was a first-round pick, so after a few years where he couldn't break into the starting lineup, people around here started throwing the "b" word around (bust, not anything else, just bust). Then a funny thing happened. Marcus asked the coaches to let him play defensive end instead. That move helped revive his career and get him all the way up to 14 sacks in the 2000 season. Unfortunately, his body broke down pretty rapidly on him, but you have to wonder how different his career might have been had the coaches tried him at defensive end from day one.

If I were drafting Hageman, that's exactly what I'm doing. That's a Captain Obvious move if you run a 3-4, but I'd do it in a 4-3 as well. I don't know that he will ever be dominant as a defensive tackle, but I do see the potential for dominance from defensive end. Minnesota stuck him out at defensive end a few times, and he did some pretty good things considering it wasn't his full-time position. Hell, one of his hits on the quarterback came from right defensive end where he just beat up on a left tackle and came inside on a level (rusher gets just beyond the level of the quarterback then falls back inside for the sack) rush.

It's still going to be somewhat of a crapshoot because of the motivation question. A team better have a hard-ass defensive line coach in place and a strong defensive line group to make sure he gets pushed as much as possible from day one. There is only so much coaches can control, and since how hard he goes isn't one of them, it will have to be a leap of faith for the team that takes him.

As the saying goes, "scared money don't make money." Ra'Shede Hageman is a project, but one that could pay off big time for the team that selects him. I fully expect someone to bet on Hageman; I just don't think it will be in the first round.