The Notre Dame offensive lineman has the technique and toughness, but he might not be able to handle the tackle spot in the NFL. No worries, says retired NFL defensive end Stephen White.

Another offensive lineman who looks like a first-rounder is former Notre Dame left tackle Zack Martin. I don't particularly like watching Notre Dame play, so I wasn't at all familiar with Martin before now, which made breaking him down all the more fun. For the purposes of this breakdown I watched him play against Purdue, Michigan State, Arizona State, USC and Stanford. Those represented the third, fourth, sixth, seventh and 12th games of Martin's final season in South Bend.

I gotta be honest, watching Zack Martin in these games was like what I thought I would see when I watched Michigan's Taylor Lewan. The Michigan tackle was also somewhat of a blank slate to me before I watched him. I had heard of Lewan from folks who I trust when it comes to college football. Before the season started, he seemed to be a consensus pick for top left tackle in college football. At 6'7, 309 pounds with this crazy nasty streak, Lewan was supposed to be a dominant force as a run blocker and a formidable pass blocker to boot.

That was my perception at least.

Of the two, it was Martin who was more aggressive and nasty with his run blocking. Unlike Lewan, he actually moved people off the ball.

Lewan only had one pancake block in the five games that I watched him play. Martin had 12! That's just not normal nowadays with the bigger/stronger/faster defensive linemen. He reminded me a lot of Greg Robinson in that he didn't just want to block his opponents, he wanted to dominate them every play. And woe to the defensive end who tried to make a tackle without escaping from Martin's block. That normally didn't end well for him.

Martin isn't overly athletic compared to the other three offensive tackles I've broken down (including Jake Matthews), but he got the job done consistently and at a high level in those five games. In addition to knocking people off the ball in the run game, he was also pretty good as a pass blocker. Martin only gave up one pressure and was only beaten one-on-one eight times in those five games. That is pretty damn good in any context.

He didn't run a 40 at the combine, but Martin tested pretty well in other areas like 29 reps of 225 pounds on the bench press and a 28-inch vertical leap along with a 4.59 in the short shuttle. Those are solid numbers for a first-round caliber offensive lineman and it mirrors what I saw on film. He is powerful at the point of attack, quick off the ball when pass blocking, and good at sifting up to linebackers and staying on the block at the second level.

Like Lewan, Martin didn't get much of a chance to show what he could do on screens and pulls blocking guys in space, but the few opportunities he did have he looked very good doing it. His footwork was consistent, whether run blocking or pass blocking, and I rarely saw him off balance. It was his balance that allowed him to stay on some of those blocks that resulted in pancakes.

Do you feel a but coming?

As I said before, Martin was pretty good as a pass blocker. However, when he did get into trouble, it tended to be when the pass rusher made a swim move. In fact, four out of the eight times he was beaten in those five games it was by a guy using a swim move. The fact that one move consistently gave Martin trouble made me want to investigate further.

Now it all made sense.

One of the problems offensive tackles with short arms encounter is trying keep their hands on an edge rusher whose arms are longer than theirs and who knows what they are doing when it comes to pass rushing. If the offensive tackle can't even get his hands on the pass rusher, he has a very low probability of being able to stop him from getting to the quarterback.

Some guys with short arms learn how to make up for it by adjusting their pass set (how they set up to pass block). If they can jump the pass rusher before he gets into his rush, then the chances are greater that they can get their hands on the rusher and neutralize their rush right off the bat. Martin actually did a little bit of that himself from time to time to great effect.

The problem, of course, is that it's going to be a lot harder for him to get away with that on the next level. Everybody is going to be bigger, stronger and faster. The worst guy he plays against in the NFL will probably be just as good as the best guy he faced in college. I could definitely see the potential for Martin to have a lot of trouble adjusting to pass blocking on the next level. 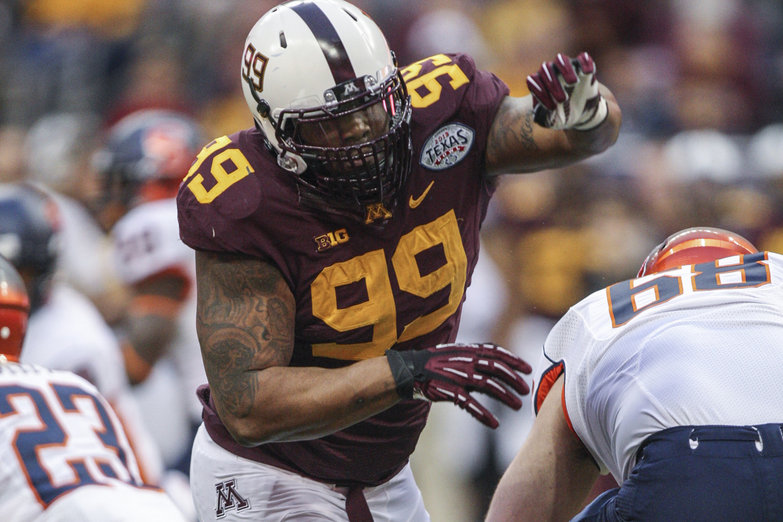 Ok, so the bad news is that even though Zack Martin is strong enough and possesses good enough technique to play offensive tackle in the NFL, his arms may not be quite long enough to get the job done. The good news is because he plays so physical and so strong with such good technique, a team can probably use him inside instead.

Martin can immediately make most teams better at running the ball as a guard from day one, and he shouldn't have much trouble adjusting to blocking defensive tackles. He is also big enough, at 308 pounds, to anchor down and not get pushed around. He's definitely athletic enough to do the pulling for counters and power O. And, hell, maybe down the road you can try him outside at offensive tackle much like I would want to do with Robinson.

Left guard is probably the perfect position for Martin.

The question is, how high is too high to draft a guy who may only play guard for your team his whole career?

I wouldn't be surprised at all if some teams have Martin and Lewan even on their boards. What Martin lacks in size compared to Lewan, he makes up for with position versatility and more dominant film. Neither guy has the ceiling of Robinson or Matthews, the two top tackles in this draft, but both Lewan and Martin are still likely to be day one starters who play quite a bit of quality football over the next 10 years.

In the end, I think Martin will come off the board after Lewan. Teams tend to overvalue offensive tackles and undervalue guards. With Martin, there are no guarantees that he will ever be good enough to play offensive tackle on the next level, so if you take him you have to assume it's to play guard exclusively. I am sure there are some teams in the top half of the draft that need a guard more than an offensive tackle *cough* Buccaneers *cough*, but I doubt any of them would take one that high.

Martin can take heart knowing that it's not where you start, but where you finish that really matters. I think he will ball out no matter what position he plays.