Russell Allen suffered a stroke on the football field and continued to play two more quarters. Now his NFL career is over in the latest reminder that the NFL is a dangerous and violent sport.

Former Jacksonville Jaguars linebacker Russell Allen was waived/injured by the team on April 17, a bit of a surprise to those who cover the team. Or at least, at the time, it seemed as if it was a surprise.

Unfortunately for Allen, he suffered a stroke on the field in the Jaguars Week 15 matchup against the Buffalo Bills when he collided with Bills center Eric Wood, according to a recent interview with MMQB's Robert Klemko. After the collision Allen said he felt a flash, like his bell had been rung, but continued on to finish the final two quarters of the game.

Unbeknownst to him, Allen had suffered a carotid artery dissection. It consists of a tear in the walls of the artery that supply oxygen to the brain. It's generally a rare injury associated with high-speed automobile accidents.

Allen suffered this on what appeared to be a routine play chasing down a ball carrier and getting blocked by a lineman down field.

Russell Allen took the long road to the NFL. He was a very productive player at San Diego State, playing all over the field and amassing stats, but he was on a perennial loser and ended up undrafted. He was signed by the Jacksonville Jaguars in 2009 and quickly made his way onto the team's final roster after an impressive training camp and preseason, working at every linebacker spot and on special teams.

He never missed a game, even in the NFL, up to that game against the Bills in Week 15 of the 2013 season.

Allen was a consistent contributor for the Jaguars, often operating as their fourth linebacker. Allen was one of the lone bright spots of former Jaguars general manager Gene Smith, who's four-year tenure was otherwise a disaster.

He became a full-time starter for the Jaguars late in the 2011 season, coincidentally after Clint Session suffered two concussions in the same game against the Cleveland Browns in November. Session suffered a concussion early in the game, something he'd struggled with in his career up to that point, and ended up with another concussion later in the game which lead to the end of his career.

Session never recovered from the second concussion and has since been out of the league.

"It was strange because it was so routine," Russell Allen told MMQB's Robert Klemko of the collision. "We hit, I got off the block, no big deal. I felt something flash, like they say when you get your bell rung. I didn't lose consciousness. I walked back to the huddle and finished the drive."

It was the first play of the Bills opening drive after halftime. Allen played just 45 snaps that day, the least out of the Jaguars starting trio of linebackers. According to Allen, outside of the "flash" there was no immediate warning sign that he was hurt other than the "bell rings" he'd had throughout his football life. However, in his interview with Klemko, Allen noted that at some point in the second half of the game he'd experienced double-vision, even consulting with teammate Paul Posluszny to check if his eye was alright. 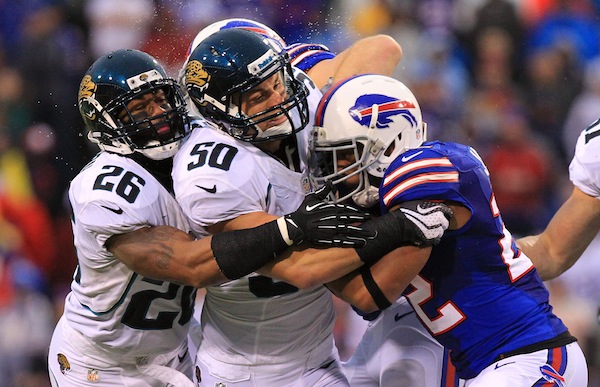 Allen had thought something was wrong with his eye, not his brain.

He said he had a headache the rest of the day and went to bed early because he couldn't stand the light enough to watch Sunday Night Football. The next morning the headache persisted so Allen informed the Jaguars medical team. After an MRI, he was told to meet the doctors at a local emergency room and was informed of his prognosis.

Ha had played half of an NFL football game after suffering a stroke.

In the original story, it's noted that Allen has a dime-sized dead spot on his cerebellum as a result of the carotid artery dissection, which takes place when a tear in an artery occurs in the inner lining of the vessel.

"A dead spot on the cerebellum, or any part of the brain, is an area that has lost blood supply for a long enough period of time to deprive it of the oxygen and nutrients it needs to survive. The area that loses blood supply eventually becomes like a scar that can no longer work properly and never really heals," SB Nation's medical expert Dr. Ali Mohamadi said.

Allen's future will be affected depending on where exactly the dead spot on his cerebellum is located.

"The cerebellum is important for body movement, eye movement, and balance, and many people who suffer from cerebellar injuries may struggle with these for the long-term, but the symptoms can vary from minimal to severe depending on the location and size," Dr. Ali explained.

But how could Allen not know he had the injury? It was obviously serious, so why didn't he report the symptoms sooner?

"The classic symptoms of a cerebellar stroke, which is what Allen suffered, are different in the short and long term," Dr. Ali said. "In the hours and days following the injury, patients can experience headaches, dizziness, nausea, loss of consciousness, loss of vision, or other neurological symptoms. Long-term, they can experience difficulty with walking and balance, abnormal reflexes, difficulty with eye movement and vision, and vertigo.

"Some of these, especially the short term symptoms, are similar to what some experience following a concussion, so it can be hard to tell them apart at first," Dr. Ali continued. "But the long-term symptoms of a cerebellar stroke are quite distinct."

Allen's story is just another reminder that at it's core, the NFL is a violent and dangerous game. It's a tough game for tough people, but that's also its biggest flaw.

NFL players are taught from a young age to play through injury, to sacrifice themselves for a team game. Suck it up and get out there. That culture permeates the high school, collegiate and professional ranks of the sport. Their jobs are on the line. 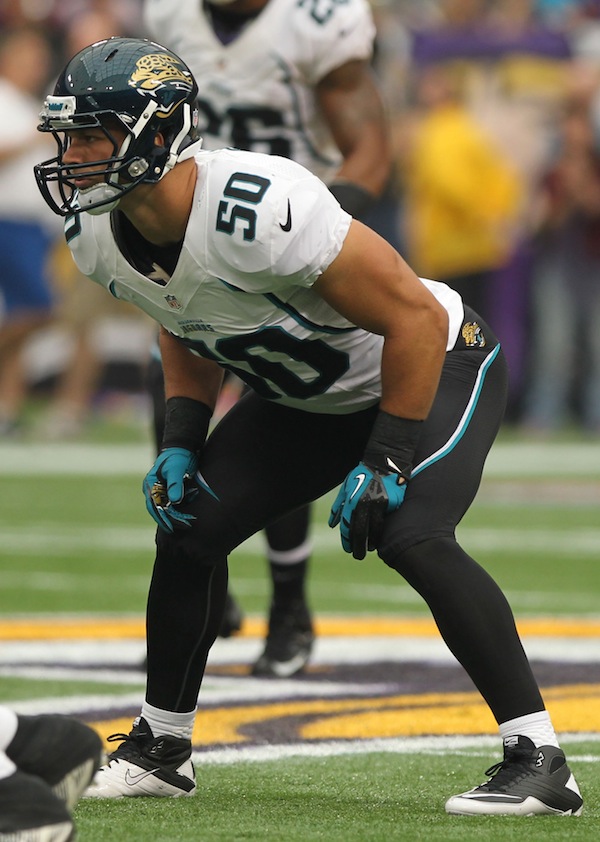 For a player like Allen, who's at times constantly on the bubble especially on a team who's going through roster re-construction and security is nowhere to be found, it's tough to take yourself out of a game because you think you might have a concussion. The NFL has at least made it be perceived that they're taking head trauma more seriously, which at times made teams overly cautious with head injuries.

"You're thinking, 'I can't come out, because what if someone else comes in and takes my job? Or they need me out there, and I can't come out because I really want to win'," Allen told Klemko, as to why he didn't tell anyone but his teammate. " But you can't do that, and I learned that the hard way."

It's not necessarily Paul Posluszny's responsibility to alert his team's medical staff that Allen had been seeing double on the field after taking a shot to the head. He's in the moment, like Allen. They're filled will adrenaline and worried about stopping the next play.

The only thing players can really do is admit when something is wrong, but for lack of a better comparison that's almost like telling your boss you're not able to continue doing your job. It's weird how head injuries are perceived as something completely different than other injuries in the NFL, at least from an outsider perspective.

I told my story so athletes understand you can't ignore head injuries. If you're not sure you have one, then you do. Report it immediately.

The NFL is still going to be the big corporate machine that it is, chewing up and spitting out players when they can no longer contribute. They're still going to treat players with head injuries like they're radioactive, because of the legal ramifications and lawsuits that have and likely will continue to occur.

It's going to take players taking the lead on the issue. They know the game is violent. They are at least aware of the dangerous future ramifications of head trauma. They know the league isn't really going to do much, officially, to help curb the danger more than they have to to skew public perception.

Now they'll need to have the courage to report them when they happen.

It's easy for me to say that though, my paycheck isn't on the line.