The former Auburn star has a plan to sack quarterbacks and it just might land him in the first round of the 2014 NFL Draft.

Dee Ford has a plan for being a good pass rusher.

The Auburn defensive end looks at mastering the art of rushing a quarterback the same way he mastered playing piano.

As a child, a family member showed Ford a short song with a few notes on the piano. Coming from a musical family, Ford picked things up effortlessly. Without any lessons, he quickly became a self-taught jazz pianist.

Challenging your brain to learn something you previously didn’t understand helped Ford on the football field. It helped him formulate his pass rush plan.

"With the piano, it’s just like football. It’s all about being out of your comfort zone," Ford said. "That’s how I was able to become a better football player. Getting out and doing things I couldn’t do. I learned that learning how to play the keyboard. I taught myself by learning things I couldn’t play. Eventually, I was just playing it like it was just nothing."

The same can be said for Ford’s play for Auburn last season. Ford had an all-conference season with 10.5 sacks, 14.5 tackles for loss and 17 quarterback hurries in just 12 games. He missed two at the start of the season because of a knee injury. Ford said that, at best, he was playing at 75 percent healthy most of the season.

To overcome his knee injury, Ford relied on a set of specific pass rush moves he perfected at Auburn. His plan.

Hearing Ford describe those pass rush moves is like hearing a great musician describe lyrics to a song. There’s passion and pride in his tone as he breaks down the moves that have made him a possible first-round NFL Draft pick.

Makes music on and off the football field

The pass rusher from Auburn hopes to experience even more success at the next level after winning a national championship and Senior Bowl MVP trophy.

Makes music on and off the football field

Ford’s game is built around speed. That comes both naturally, and as a necessity. Ford is a 6'2, 250-pound defensive end. He’s not a 6'5, 270-pound ultra athlete like other top pass rushers. Instead, Ford has relied on his speed and hustle to get by.

"I’m naturally fast for my size. As far as what I do with my game, you have to have a plan as a pass rusher," Ford said. "I picked two or three moves that I really love to do, and I perfected them. I really perfected them."

Ford’s next move is one that got him some attention in last season’s national championship game. Although Auburn narrowly lost 34-31 to Florida State, Ford still managed to have a good game. He sacked Heisman Trophy winning quarterback Jameis Winston twice.

One of those sacks came with the second move in his pass rush plan:

"My counter to (speed rushing) is what I call two-piece. Once you have that tackle kicking, you just one-two and stick inside and beat him to the inside," Ford said. "I had a sack in the national championship game like that. The guy was overset and so afraid of the speed that he was oversetting so I beat him inside." 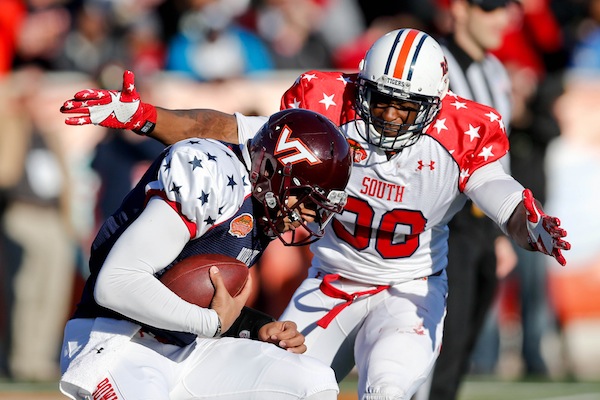 Ford maintained his momentum from the title game at this year’s Senior Bowl. There, he was voted the game’s MVP.

More so than any other player in Mobile, Alabama, Ford dominated the considerably more important practice sessions. Nearly every repetition Ford took during practice had an NFL evaluator scribbling down notes or positively talking Ford up. In the game itself, Ford used a move he cribbed from another Senior Bowl star. It is the third part of his plan.

"I do a one-two jab inside to make them stop their feet. I got that from DeMarcus Ware," Ford said. "Once you threaten an offensive lineman, he gets his hands up. But once he does that, he stops his feet. Once he stops his feet, you club his hands down and beat him outside. I got a sack like that in the Senior Bowl."

All week, offensive line coaches were warning their blockers about Ford’s speed. It didn’t matter.

In Mobile, Ford utilized all three of the signature moves in his plan. He consistently made easy work of offensive linemen with several inches and in some cases nearly 100 pounds on him. Whether it was Nevada’s Joel Bitonio, Tennessee’s Ja’Wuan James or Virginia’s Morgan Moses, Ford was routinely getting the best of them.

He was so fast off the line of scrimmage that on some plays it looked like he was in the backfield before the offensive tackle even moved.

"Every offensive lineman hates to go against a fast guy," Vanderbilt's Wesley Johnson said at the Senior Bowl. "It's a pain to do it."

The coaching staff of the Jacksonville Jaguars was assigned to Ford’s South squad at the Senior Bowl. All week, offensive line coaches were warning their blockers about Ford’s speed. It didn’t matter.

"Dee is exciting," Jaguars head coach Gus Bradley said. "I really like his personality, I like his spirit, he loves the game and he showcases that on the practice field. Any time a guy can come off the edge and show the ability to have some rushes in him, I think it really stands out and pops out for all the coaches."

Ford was prepared to continue riding the Senior Bowl momentum at the NFL Scouting Combine in February. There, he would get to show his natural athleticism alongside fellow pass rushing virtuoso Jadeveon Clowney, the draft’s top player.

So confident about his ability and preparation, Ford was critical of Clowney, his SEC cohort. In a radio interview, Ford said he was a better player and Clowney was like "a blind dog in a meat market."

In other words, to Ford, Clowney is an unrefined player with obvious talent. He can blow people away with his athleticism, but Clowney doesn’t always know how to make a big play happen. As Ford said, Clowney hasn’t refined his pass rush repertoire. He hasn’t put together his own pass rush plan.

"He’s so freakishly talented," Ford said about Clowney. "Boy, if you prepared this man. He needs to go work on his moves because he’s just running by guys. He’s just so explosive off the ball, he didn’t have to work on his moves.

"But once he develops that, you won’t be able to stop this guy. That’s exactly what I meant."

Ford never got a chance to show he’s Clowney’s equal as an athlete at the combine. He was abruptly pulled out of drills as a precaution because he had surgery for a herniated disc in 2011. 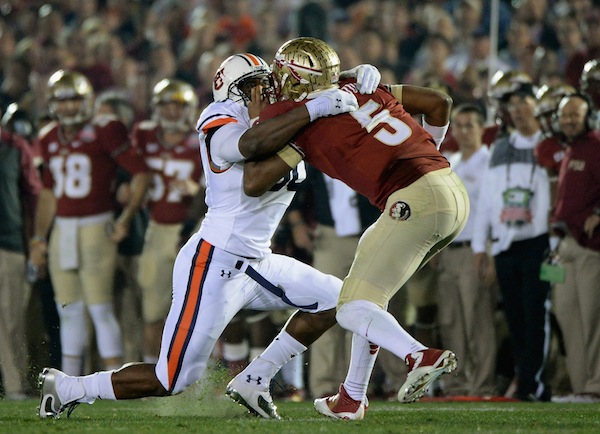 At the Combine and since then, Ford has spent a considerable amount of time talking to and working out for teams that run a 3-4 defense. Before Auburn’s pro day, Ford spent time with the Arizona Cardinals, who quizzed him on rushing the passer from outside linebacker. Ford said he could easily answer their questions. He probably even told them about his plan.

"They see me first off rushing the passer," Ford said. "Whether it’s a 4-3 defensive end or a 3-4 outside linebacker, teams like me at both. It’s all just a matter of me getting adjusted. They all tell me it’s not going to be hard because I’m going to be rushing the passer. You just have to get comfortable.

"When you think of the pass rush, it’s almost like dancing. You want to make those moves to where you’re not thinking. Most guys you see in college, you might see them bull rush the whole time. Why? Because they don’t have a plan."