The Notebook: Anthony Barr and the importance of effort

Anthony Barr may not be the best pass rusher in the 2014 NFL Draft, but he's got the kind of motor that will take him places. Retired NFL defensive end Stephen White has a closer look at the UCLA linebacker.

Share All sharing options for: The Notebook: Anthony Barr and the importance of effort

Another highly rated pass rusher in this year's draft is former UCLA linebacker Anthony Barr. I decided to break down his play against Nebraska, Stanford, Oregon, Washington and USC. Those were the second, sixth, seventh, 10th and 12th games of Barr's season, respectively.

Anthony Barr was not the kind of player who showed up on every play. As a pass rusher, he actually had a low percentage of pass rush wins (situations where he had a legitimate one-on-one with an offensive lineman, the quarterback took a five- or seven-step drop back and he made a move and freed himself from the blocker without regard to whether he actually got a sack or not). However, on the few occasions when he did win, the results were generally spectacular. 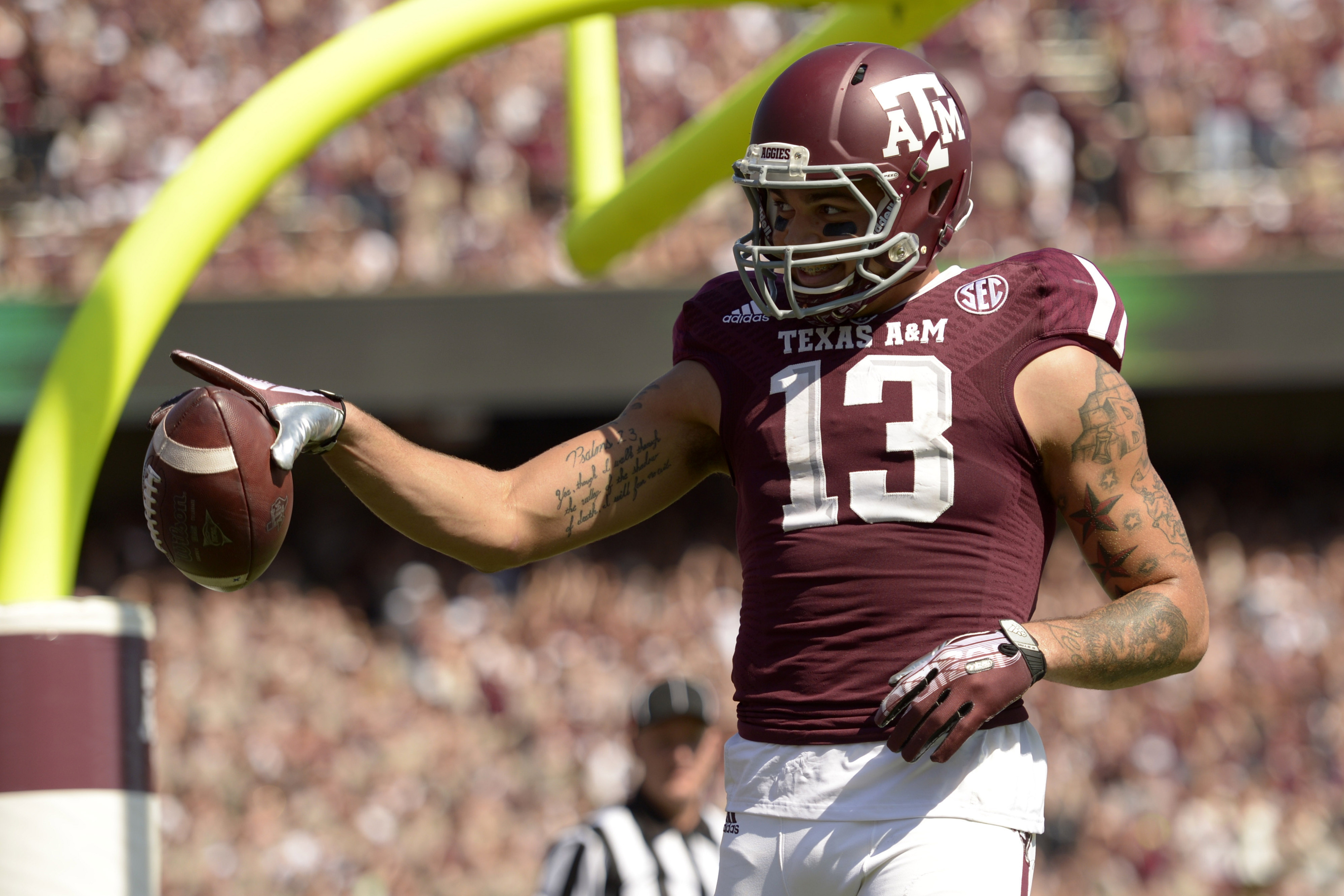 It was weird to watch Barr play and see him have some monster plays interspersed with a whole lot of meh plays. Again, as a pass rusher you were more likely to see him get engulfed by an offensive tackle while he was trying to bull rush him, rather than to see him make a finesse move and use his speed to get by the blocker. I have to wonder if some of that is how he was coached.

Here's what I mean by that.

In several of the games I watched for this breakdown, Barr faced a mobile quarterback. Quite a few defensive coordinators prefer that their pass rushers bull rush and push the pocket back against mobile quarterbacks rather than rush like they normally would and risk opening up a lane for him to scramble up inside. While Barr did win a few of those bull rushes, it is clear that bull rushing isn't among the top five things he does well as a pass rusher. When he actually made moves, he consistently left offensive linemen in the dust on the way to the quarterback; it just didn't happen all that much.

He had this great wiper move (a hand movement where a pass rusher swipes outside to inside at the blocker's hands so that the blocker cannot get his hands on the pass rusher) early in the game against Oregon. He made the offensive tackle look like he was standing in quicksand as he blew by him and got a sack/caused fumble on the quarterback. Barr got another sack later in the game fighting through a double team.

For the game, Barr only won, by my count, four of the 16 legitimate pass rush opportunities he had that day. Normally, that's not good at all because beating a guy one-on-one does not guarantee that you will get to the quarterback. It's just a good start.

There are a lot of ways to look at Barr's inconsistency. I will again mention that perhaps coaching was a factor. On the other hand, it might be a sign that Barr has some kind of mental block that prevents him from playing up to his potential on every play. Maybe he turns it on and off on certain plays. What is readily apparent at the end of the day is that no matter how low his winning percentage was every game, Barr found a way to make several big plays. I will always have a place on my team for a playmaker.

I didn't see Barr put his hand on the ground a single time in those five games, not even when he rushed inside. To be fair, Barr was a linebacker at UCLA, so his job called for him to be in a two-point stance most of the time. He was decent in zone coverage as a matter of fact and looked natural in space.

Not putting his hand down along with not appearing to have a particularly high level of functional strength does have me questioning whether he could play defensive end in a 4-3. Actually, I'm pretty sure Barr is an outside linebacker all the way. Even in a 4-3 I would envision him as more of a Sam, strongside linebacker who is usually more of a run stuffer/pass rusher-type linebacker on first and second down and a pass rusher on third down, rather than a full-time defensive end.

Barr shows exceptional closing speed which is part of how he makes so many plays.

I'm not saying he can't play defensive end in a 4-3. He certainly has the size and the speed for it. He is also pretty good with his hands in tight quarters. I would need to see how comfortable he is in a three-point stance first, and also he would have to get a lot stronger to play at as high a level as he could at linebacker.

It's not like Barr got shoved around a lot. The problem is that he rarely got push. When he took on an offensive tackle or tight end it was usually a stalemate, or he would be the one who ended up giving a little ground. He usually did a good job of eventually getting off the block, but by that time he had either opened up the hole inside of him or given up containment to his outside. The offensive tackles and tight ends are only going to be bigger and stronger on the next level, so while he has good technique right now, his level of functional strength would concern me as a 4-3 defensive end.

And look, that's ok. Plenty of teams run a 3-4 now or some kind of hybrid (Falcons, for instance) where Barr would fit right in. I know he ran a 4.66 at the combine, but from the point where he escapes off a block to the point where he gets to the quarterback, Barr shows exceptional closing speed which is part of how he makes so many plays. That kind of explosiveness can help to get him by as he gets bigger and stronger in the weight room.

Now one thing that I loved about Barr was that in every game you see him show up running 20-30 yards downfield trying to make a play. He has a great motor and a lot of the big plays he made came off mostly his extra effort to get to the ball. In the Nebraska game, he runs down the field and dislodges the ball from the quarterback who had already been wrapped up. He ended up forcing a turnover, which was a huge play at the time. Barr played the running back first on that read-option play, and still managed to turn around and get involved in the tackle in a major way.

That was an outstanding play, but it became routine to see it while watching him play. You almost forget to appreciate his outstanding effort play after play because it becomes the norm. Then I pulled back and watched his teammates, who weren't always as eager to get to the ball, and the light bulb went off.

Good things come to those who hustle, I really believe that. Everybody in the NFL is so talented that chances are if you bust your ass play in and play out, somehow, some way, you will make a lot of plays. Maybe not big plays, but even an average player will see his name on the stat sheet if he gives outstanding effort at all times.

With Barr you have the outstanding effort and the elite athleticism, so it's a good bet that he will be a playmaker on the next level much like he was in college if he's put in the right situation. One thing I know for sure is that NFL position coaches love to coach guys up on their technique, but they hate having to coach up effort. I don't think they will have any problem with the latter when it comes to Barr.

There are levels to this

Anthony Barr really grew on me as I watched him play in those five games. At first, it bothered me that he was obviously physically gifted, but wasn't always dominant. I came to believe that it was more of a coaching issue than anything else. The technique was there, but the undersized Barr was asked to try to run through guys rather than around them to make plays far too often. That shouldn't be a problem when he gets to the NFL.

Though there's no question Barr showed that he has a lot of upside, I wouldn't rank him up there with Jadeveon Clowney or Khalil Mack. He is just a hair behind those guys. His athleticism is good, but he isn't close to being the physical freak that Clowney is. Barr is about even with Mack in most areas except for functional strength, where there is a big difference. I think Barr is going to be a very good NFL player, but there is no way I would take him over Clowney or Mack, no matter what defense I was running.

That is probably more of a testament to Clowney and Mack than it is a knock on Barr, but that's how he would rank on my board.

(Special thanks to DraftBreakdown.com for the cutup videos.)