The Notebook: Is Kony Ealy a 1st-round pick?

The Missouri standout is seen by many as one of the top pass rushers in the 2014 NFL Draft. Not so fast, says retired NFL defensive end Stephen White.

Share All sharing options for: The Notebook: Is Kony Ealy a 1st-round pick?

Former Missouri defensive end Kony Ealy is another guy vying to be one of the top three or four pass rushers to come off the board in the 2014 NFL Draft, so I decided to break him down this week. For this, I watched Ealy play against Indiana, Vanderbilt, Florida, Kentucky and Oklahoma State. Those games represented the third, fifth, seventh, 10th and 14th games of Ealy's season, respectively.

(Thanks to DraftBreakdown.com for the excellent video selection.)

Nothing about Kony Ealy jumped off the screen at me while watching those games. Ealy is good in most areas. His technique is fine, and for the most part his effort is, as Steve Spurrier would say, "OK." But there is no one area where he is special.

It was such a contrast to watching Jadeveon Clowney, Khalil Mack and Anthony Barr. Those guys had deficiencies for sure, but they also all had something or some things special about their game that showed a very high upside. I didn't see that from Ealy. 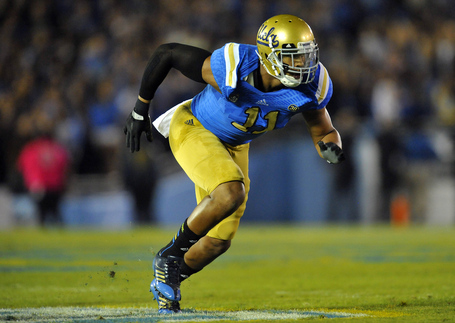 He is a decent pass rusher but nothing special, at least in those five games. He basically has one move and uses it repeatedly, a quick arm-over inside. Now, it's better than Clowney's shitty wide swim move, but not by much. Ealy got sacks and pressures, but on many of his pass rush wins he was either unblocked or his effort got him to the quarterback, not his speed or his technique. That's problematic.

Literally, I only saw Ealy win four finesse pass rushes that weren't quick arm-overs in five games. On two occasions he won with a dip-and-rip move (dip your inside shoulder to avoid the blocker's punch, then rip up with your inside arm to clear you over the block), one time he won on a speed rush (just run around the blocker) and he also got a sack on a level rush (as you feel yourself running deeper than the quarterback you stop, swat the blocker by to the outside and fall back inside right at the level of the quarterback). You put that with the five quick arm-over wins in five games and that's only nine pass rush wins off finesse moves in those games. That's not good for a guy who isn't a great power rusher either.

Playing run defense was kind of the same deal. Ealy made plays, but he didn't dominate at the point of attack most of the time. He seemed to really struggle at times playing off of tight end blocks in the run game. He also didn't have the kind of speed to stop the running back on zone plays when he was unblocked backside. Again, that's a contrast to Clowney, Mack and Barr; those three routinely got to ball carriers behind the line of scrimmage from the backside when they were unblocked.

I also didn't see anything in the way of explosiveness off the snap. That is something essential to a pass rusher: the ability to beat the offensive linemen out of their stance and make them fear your speed rush. That gets a blocker to step wide when the ball is snapped, because he thinks his assignment will run around him. It's a helluva lot harder to win on inside moves, like a quick arm-over, if you can't make an offensive lineman do that.

I was a fan of Ealy during the season watching the games live. After really studying him, I'm asking if he should even be in the conversation with those other three guys. I'm not so sure.

How to break NCAA rules without getting caught, all in the words of actual bag men.

What I can say in Ealy's favor is that Missouri's defense was very multiple, so I had a chance to see him play a variety of different roles in those five games. At 6'4, 273 pounds, Ealy was better equipped physically than Clowney, Mack or Barr to play inside in college. Missouri took advantage of this by kicking him down to three-technique (lined up inside the guard and tackle) defensive tackle on some passing downs to give the defense more speed for getting after the quarterback. He also would drop or spy from defensive tackle from time to time. You could find Ealy inside about six times or so a game.

Once again, you would think that he would really shine in one of those alignments. But nope, nah, wrong. WRONG!

He was good almost anywhere he lined up, but I just didn't see the flashes of greatness that I would expect from a guy who is seen as a potential first-round pick. It almost made me wonder if trying to do everything created a situation where it was hard for Ealy to develop fully by focusing on just one thing in particular.

I talk a lot about upside, being polished, potential and ceiling in these breakdowns, because I am not judging these guys just on how they performed in college. What I'm trying to do is take what I have seen them do in college and project how they will do in the NFL. One thing that is almost universal about top draft picks is that they are explosive in some way, shape or form, whether it's how fast they can run or how strong they are. These guys play at a level that usually jumps out at you; they stand out compared to everyone around them. Ealy makes plays, no doubt about that, but they don't make you jump out of your seat.

I kept thinking about how much I loved watching Michael Sam, Ealy's teammate, play last season because of how good he was with his technique. It didn't appear to me that Ealy was any more athletic or explosive than Sam watching the games live. While breaking down these five games, I didn't see much separation between Ealy and the rest of the guys on Missouri's defensive line when it came to athleticism. So I decided to go back and compare and contrast Ealy's combine performance with Sam's, since Sam's numbers were widely panned as being average or below.

Ealy's bench and vertical were better, but not by much. Sam actually had a slightly better 40 time, and their broad jump was tied. I guess what I'm saying is that if Sam is a late-round pick because he is an average athlete, then why are we talking about Ealy going in the first round when he's not much better and his technique is worse?

I get that how I feel about Ealy is going to be in the minority. Hell, maybe he showed a lot in the other nine games than he did in these five. I can only go by what I see, and I don't see a first-round pick ... maybe not even a second. I also don't want to sound like I'm trashing Ealy. I think he was a fine college player and a big part of why Missouri was in the SEC Championship Game last season. I just don't think he will be special in the NFL.

I certainly can't understand his name being mentioned in the same breath with Clowney, Mack and Barr.

I think he will play in the NFL and may well start at some point. However, a first-round pick, especially a high one, is expected to be a Pro Bowler during his career, and I can't see Ealy being that. Then again, a lot of guys drafted in the first round this year won't be either. It happens.