What have the AFC East teams been doing with all those draft picks over the years? Apparently nothing much, except the Patriots. But there's hope, and Ryan Nanni has the pseudoscience to prove it.

Has Buffalo ever drafted in this position? Three times, most recently in 2010 when they drafted C.J. Spiller, The Running Back Who Has Only Been Used In The Right Ways Go Bills. The best-named player the Bills have drafted ninth, however, is Haven Moses. Your dad was probably in a band called Haven Moses in 1974, and they were terrible.

Who's usually taken here? It's fairly well-distributed - six defensive backs, five offensive linemen, and five defensive linemen have all gone at nine - but the best option might be linebacker, as Brian Urlacher, Chris Claiborne, and Luke Kuechly all made it this far in the draft order.

The Class of 2014 was founded in 1992. What company was ninth on the Fortune 500 list that year? Texaco, a once-successful independent company headquartered in New York that was acquired by an outsider from California who sold those headquarters. This is probably not a metaphor for the Bills.

What position is taken most often at number 18? A defensive lineman's been picked here in 12 of the last 30 drafts, including four of the last five. How can you resist this siren call, Jets? Who are these "journalists" and "experts" who know what your team needs are? YOU are in charge of your own destiny, and you can prove that by making an incredibly ill-advised pick here, like Clemson's Vic Beasley. Draft eligibility is subjective, man.

Who came in 18th on Fortune's list in 1992? Eastman Kodak, which filed for Chapter 11 bankruptcy twenty years later. There's never been an NFL franchise that went bankrupt - only hockey and baseball have reached that lofty peak - so we're probably overdue. See, don't you feel better about the Texaco comparison now, Bills fans?

Have the Dolphins picked 19th before? Two other times, most notably in 2004 when they snagged Vernon Carey. Ok, that's not scientifically accurate, as technically the Dolphins were just pulled into Vernon Carey's gravitational field and couldn't break free for eight years.

Who usually gets picked in this spot? For all the planning and talk of big boards, I suspect the NFL Draft is an essentially reactionary process, so if the 18th pick is mostly d-linemen, then it's not surprising that the 19th pick is mostly o-linemen. Ten have been taken here since 1984, but the greatest of them is Randall McDaniel, the man who scored his first pro touchdown when he was 36 years, 282 days old. When you are 36 years and 282 days old, you will be glad to finish a 5K without crying.

And number 19 on the '92 Forbes 500? ConAgra Foods, makers of Chef Boyardee, Fiddle Faddle, Reddi-wip, and Ro-Tel, and Slim Jim. ConAgra Foods has kept so many college students who were too lazy to go to the dining hall alive, and for that we must thank them/ask them to chip in for their long-term medical care.

Has New England previously drafted in this position? Twice, but only once in the first round (Chris Canty in 1997). Their other 29th overall selection was in the second round of the AFL Draft in 1964, center Jon Morris. This is his trading card: 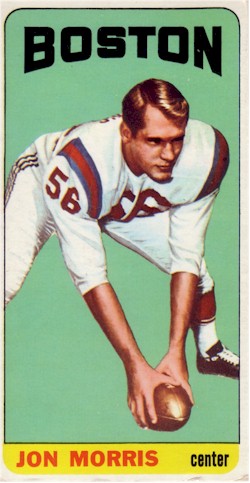 Look at that hair! It's so nicely styled that an opponent wouldn't dare hit you in the head. The NFL needs to embrace this innovative approach to safety and mandate perfect coiffure on the field. THE PLAYERS COME FIRST.

What position usually gets taken here? Nine offensive linemen have been picked here since 1984, but, somehow, a tight end hasn't been drafted here in over forty years. That's not okay, because the end of the first round is the perfect place to draft a tight end who ends up being amazing. Then you're a genius, and everyone loves you, even your dad who you could never impress.

Who was 29th on the Fortune 500 in 1992? 3M, the company that we all see mentioned and go "oh, right, the dudes that make tape." But it goes so much deeper than that; just look at this list of 3M products. Novec 1230? VHB? Cubitron II? 3M could be building a whole arsenal of code-named weapons to overthrow the government and nobody would notice because we'd be too busy wrapping presents.