The scouting process for the NFL Draft has an unusual focus on paternalism.

The NFL Draft player scouting process is more complex than ever. It takes more than just game tape, spreadsheets and pro days to gauge a prospect's readiness for the big time. Fortunately, the cutting edge world of draft analysis has taken a cutting edge approach to player analysis: digging NSA-deep into their personal lives.

Look no further than to the scouting reports posted on the league's own official web site for some insight into the process. They really put the profiling into the profiles.

Marital status and offspring are important things to know, apparently.

They were more specific about Concordia defensive end Zach Moore.

Fresno State QB Derek Carr has a child, a son, as well. Here's his profile.

Oklahoma State WR Josh Stewart gets the extended bio treatment in his profile.

Click through those links and take a look at the author's byline. It's at the bottom of the page in this case. Surprised that Nolan Nawrocki would write these? After all, the man made a name for himself assessing Cam Newton's smile.

Your first reaction was probably something like "kinda racist." But they're listing this bit of personal information first on all of those profiles. Because that's how NFL teams do it. The logic being that it's useful information to determining a player's mental and emotional makeup, a picture of their stability before giving that person a contract. It's not so different, or less intrusive, than the company that gives prospective employees a psychological examination.

A behind-the-scenes look at how the NFL evaluates talent

Hump moves, burst, stacking and shedding ... the terminology sounds funny, but each word or phrase has a very specific meaning when it comes to evaluating draft prospects.

Not just throwing darts How to speak like a scout

Armchair psychoanalysis by NFL scouts and the media types who emulate them, people stuck inside a vacuum sealed world that's not exactly renowned for keeping up to date on societal norms. This is the same culture that doesn't see anything wrong with asking Dez Bryant whether or not his mother is a prostitute. Or asking former Colorado tight end Nick Kasa if he liked girls at the Combine.

That last question prompted an NFL investigation, one that ended with a memo (!) reminding teams about what was acceptable and what wasn't acceptable when it came to questioning prospects.

The league spent the bulk of their annual meetings this year talking about being a more open and accepting workplace. It was something that needed to be addressed in light of the incidents mentioned above and the hazing business that scandalized the Dolphins locker room. The NFL doesn't want a fight over working conditions on its hands anymore than it wants to alienate any segment of its mass audience.

I'm no HR expert, but making broad assumptions about potential employees based on their marital status, whether or not they have children or the hardships of their childhood doesn't seem like a very productive practice either.

These scouting reports are reminder of just how tone deaf the NFL can be sometimes. If these are the public versions of the scouting reports, you can imagine what kinds of things the private ones that teams use say.

I suspect they might read something like the one Nawrocki wrote for former Oregon Ducks tight end Colt Lyerla.

They're not putting personal information in here, the author's drawing his own conclusion about Lyerla's father moving leading to a suspension. It goes on to note his Twitter activity.

It doesn't stop there.

The obsession with paternalism throughout the bulk of the scouting reports comes full circle at the end of the writeup on Lyerla: 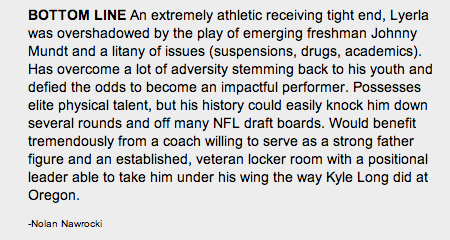