The top takeaways from the weekend: the Texans missed a quarterback, Johnny Football was a steal for Cleveland and the Panthers have no idea what they're doing.

Texans land a star in Clowney, but where's the quarterback?

After all the trade talks, Houston stood pat and took the most talented player of the draft with the No. 1 overall pick. But while the experts are lauding them for grabbing Jadeveon Clowney, they're also questioning the decision to wait until the fourth round to take a quarterback. Pittsburgh's Tom Savage doesn't look like a franchise quarterback, and the only other viable option on their roster at this point is Ryan Fitzpatrick. That said, their draft as a whole is being graded as a success. They loaded up on defense, complementing Clowney with monstrous Notre Dame defensive tackle Louis Nix III and Alabama defensive end Jeoffrey Pagan.

SB Nation: A
ESPN: A-
CBS Sports: B+
Sports Illustrated: A

Johnny Cleveland is a hit

Here's our rapid reaction to the 2014 NFL Draft.

The Browns added the most exciting player in the draft with Johnny Manziel, and they did so at an unbelievable value. After initially passing on him to grab cornerback Justin Gilbert, they swung a trade (their third of the first round) to come back up and take Manziel at No. 22 overall. They also managed to grab an extra first-round pick in 2015 by trading away the No. 4 overall pick to the Bills, who used that selection to take Sammy Watkins. The hole in Cleveland's draft haul is wide receiver. Passing on Watkins is one thing, but they didn't use a single one of their five picks to address the position. In light of what could end up being a season-long suspension for talented but troubled star Josh Gordon, that doesn't make any sense. The result is B-minuses across the board.

SB Nation: B-
ESPN: B-
CBS Sports: B-
Sports Illustrated: B-

With Manziel still on the board when the Cowboys came on the clock at No. 16, there seemed no way team owner Jerry Jones would be able to keep his finger off the trigger. Rumors had been flying for weeks that Dallas would take Manziel were he available -- despite the presence of Tony Romo on the roster -- and Manziel's slide felt like destiny. Somehow, Jones was able to make the responsible pick in Notre Dame offensive tackle Zach Martin, likely saving Twitter from crashing in the process. The Cowboys also addressed the departure of DeMarcus Ware, picking up Boise State defensive end Demarcus Lawrence and Iowa outside linebacker Anthony Hitchens.

SB Nation: B-
ESPN: B
CBS Sports: B
Sports Illustrated: B- 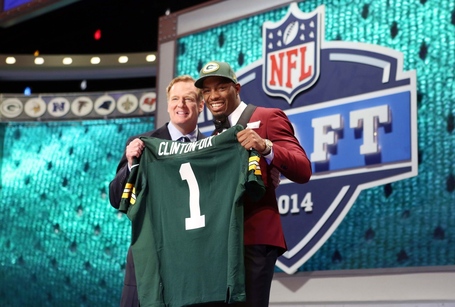 Carolina lost a ton of key players to free agency this offseason, and the experts don't think they did enough to fill the holes. Of particular concern is wide receiver, where the Panthers lost three of their top four receivers from 2013, including longtime star Steve Smith. They did grab Florida State's Kelvin Benjamin in Round 1, but didn't touch the position after that. Defensive end Kony Ealy, who had gotten some buzz as a first round guy, was a steal at No. 60 overall, but Carolina already has a pair of bookend pass rushers in Greg Hardy and Charles Johnson. The Panthers did get a strong grade from Sports Illustrated, which listed third-round offensive guard Trai Turner out of LSU as the best value of the bunch.

Best grades of the draft 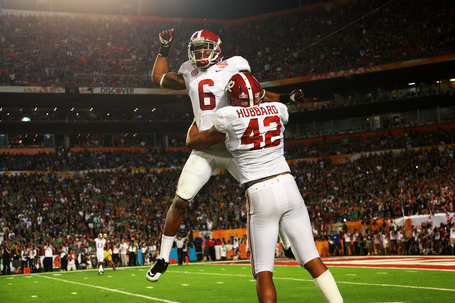 This has the makings of another great class for Ted Thompson and the Green Bay Packers. Starting off with Ha'sean Clinton-Dix and Davante Adams was as strong a first two rounds as any NFL team had. Richard Rodgers is an athletic tight end with impressive body control who could help ease the loss of Jermichael Finley. They then added Carl Bradford to play inside linebacker and two value picks at wide receiver in Jared Abbrederis and Jeff Janis. Not bad for Green Bay.

What I like about this draft is the 49ers are in a championship window, and they still managed to balance both the need for immediate help and also got a lot of talent for the future. The window can remain open.

The Bears drafted a lot of players that fit their needs on defense. I really liked what they did. First-round corner Kyle Fuller was the best in this class in my mind. Following that up with two defensive tackles was smart.

Sports Illustrated: Tie between Packers and Raiders, A

Few teams addressed obvious needs as aggressively and intelligently in this draft as the Packers, starting with first-round safety Ha Ha Clinton-Dix. The Alabama product can cover deep, and he's a great hitter from linebacker depth up. Three underrated receivers - Fresno State's Davante Adams in the second round, Wisconsin slot man Jared Abbrederis in the fifth and Saginaw Valley State's Jeff Janis in the seventh - should make Aaron Rodgers very happy. Cal tight end Richard Rodgers is the Jermichael Finley replacement - a receiver who can flare wide and make plays.

Without question, this was one of Oakland's best drafts top-to-bottom in recent memory. OLB Khalil Mack will be the face of the defense, while QB Derek Carr could carry the same mantle on offense. G Gabe Jackson, DT Justin Ellis and CB Keith McGill all ought to play early. Even Round 7 produced a couple of worthwhile projects in CB T.J. Carrie and S Jonathan Dowling. This is how your rebuild a team.

Worst grades of the draft 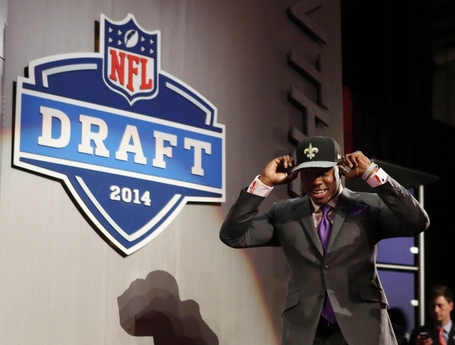 Moving up for Brandin Cooks was costly but he should be a star for New Orleans. Jean-Baptiste Is a perfect fit in Rob Ryan's press defense as long as he can sure up his tackling. The Saints lost their third-round pick in the Cooks trade, and overall this is just an average group after the first two picks.

Unfortunately, the Trent Richardson trade factors hugely into this draft, and that pretty much kills the grade. Think about this: we just went through the second year in a row where a RB wasn't drafted in Round 1, and this year it wasn't even close. Bishop Sankey came off the board at No. 54, and Sankey is a good player and filled a clear need. And don't say I just made up my mind on this after Richardson struggled. I was pretty clear on it then. So the Colts have little to show for Round 1.

Their draft was puzzling to me. Why not a left tackle? Is Byron Bell the answer? Kelvin Benjamin is a big receiver, but I liked others more. Why draft a defensive end with so many other needs?

The Colts started down in the count thanks to their ill-fated trade for Trent Richardson, which left them sitting around until pick No. 59. Their pick at that spot, Jack Mewhort, should bolster the offensive line but could need time to settle in if they move him to guard - will the Colts regret passing on Gabe Jackson and Trai Turner because of that? WR Donte Moncrief should help an unsettled position group. Not much else of note.

Chip Kelly's second NFL draft provided its share of surprises, with Louisville end Marcus Smith going in the first round. You'd be hard-pressed to find any analyst who had that kind of grade on Smith - or anywhere close - so that's one of those "wait and see" picks. The selection of Vanderbilt receiver Jordan Mathews in the second round was right in line, and will help right away.