Why does the NFL continue to punish itself, its teams, and its fans over players who smoke weed?

Share All sharing options for: The NFL should stop testing for marijuana

The Cleveland Browns got some terrible news on Friday afternoon when the NFL announced that Josh Gordon had tested positive for marijuana and would likely be suspended for the entire 2014 season. This wasn't Gordon's first run-in with the NFL's substance abuse policy, which explains why the penalty was so severe.

Opinions about that substance abuse policy notwithstanding, it's tough to point the finger at anyone besides Gordon for choosing to ignore the rules of a system he'd come to know maybe a little too well. But when a superstar is suspended for something as minor as smoking pot it raises the question:

Why does the NFL even bother testing for marijuana?

Browns fans are not taking this well.

It's not quite a rhetorical question. The policy is a relic, and certainly more trouble than it's worth for both teams and the league. The only semi-compelling argument behind teams testing for pot is itself a rationalization -- that the testing is simply an "intelligence test" to see if the player will follow (or successfully skirt) an arbitrary rule that has no bearing whatsoever on their ability to do their job at a high level. So, more of an obedience test than an intelligence test.

More importantly, it doesn't matter. If every NFL player were high every day, fans would neither notice nor care. I myself have exactly as much concern about a football player smoking pot as I do about the note on a menu warning that I'm risking food-borne illness if I don't order my steak well done.

Of all the many reasons not to care, let's start with this one: Smoking pot has no bearing on a player's on-field performance. This isn't steroids we're talking about. This isn't HGH or blood doping. Many NFL players like to smoke, which gives them something in common with many Americans in their 20s. That is not going to change, apparently not even if the players know the exact hour of the exact day to expect to have their pee hauled off in a van.

So. This is not a competitive balance issue, it's not a quality of play issue, and if it's a marketing choice, it is one that is actually more damaging to the brand than it is helpful. The NFL has to maintain a certain image in order to attract corporate partners, and the image that it has chosen is a corporate and pot-unfriendly one. That makes sense, but what causes more negative attention: nonstop reports of players being suspended for violating the league's substance abuse policy, or quietly removing marijuana from the testing slate? Marijuana is only a problem for the NFL because the NFL insists on making it a problem.

Instead of beating itself over the head with its own concocted image issue, maybe they can let these guys who spend 40 hours a week crashing into the strongest, fastest, most armored 1 percent of people in the world smoke pot after a game without worrying about being labeled a "thug" or a "locker room cancer." If the NFL can't do this because the players are partaking in an activity that 48 percent of our nation's adults admit to trying, perhaps it can justify doing it because it's bad for business.

Marijuana is only a problem for the NFL because the NFL insists on making it a problem.

Society as a whole is starting to move away from the stigmatization of marijuana, and there are two franchises in states where it is legal to buy pot for recreational use. Many employers in these states, as well as in others where this sort of open sale and use is still against the law, simply decided to turn a blind eye to marijuana testing, opting instead for clear clauses in contracts that stipulate that employees may not show up for work under the influence.

The NBA has taken steps toward a more relaxed position. They keep all tests confidential until the third positive marijuana result. At that point the player gets a five-game suspension -- something equivalent to slightly less than a one-game suspension in the NFL.

Everything's a bargaining chip in the NFL, so it's likely that the league would want a concession from the NFLPA in exchange for leniency on marijuana testing. That's how the NFL does business, but the league needs to realize that drug suspensions reflect just as poorly on teams and on the league overall as they do on individual players.

The NFL doesn't have to condone pot use, of course. But they should be able to acknowledge that it isn't productive for the NFL as an employer to take on investigative responsibilities that produce zero benefit. If a player like Davone Bess splashes his stash all over Instagram, or gets caught with pot by the police, the league would still be within its rights to take action. This would at least make the "intelligence test" argument a bit more explicit. 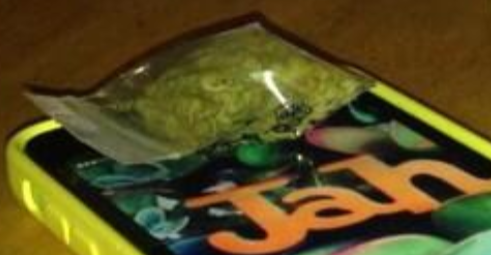 Bess posted a photo to his Instagram in January with a baggie of pot and a blunt.

The NFL is a professional sports league, and that's all it is. It is wildly successful because of what it puts on the field, not because it has dozens of NFL security agents running breathlessly around the country keeping a can of piss upright in order to safeguard the integrity of a urine sample taken from a 22-year-old special-teamer. Goodell can just treat marijuana discipline in the way that the league currently treats assault charges. If you get arrested for punching someone, Goodell can suspend you, and he just might do it. But the league doesn't bother to dispatch NFL security to Nashville clubs to review random security footage from nights when Kenny Britt was in town.

This is not an argument that the NFL stop testing for PEDs or drugs such as heroin or cocaine. In the case of steroids, there are real competitive advantage and health issues associated with their use; testing for the use of powerful narcotics can be important in identifying someone who is making the wrong decisions and needs help. But let's not make the slippery slope argument. Let's not let fear of a completely different issue prevent the league from taking one good and reasonable step in a good and reasonable direction.

If you're the type of person who won't watch professional football because you're concerned that the players are smoking pot in their free time, that's a You problem, and for consistency's sake I hope you never go out to eat at a restaurant, watch any movies, or listen to any music. The concerns of fans like these, if they're even out there, is not the NFL's problem.

The NFL's problem, in the end, is that this particular policy prevents the league from putting out the best possible product. The fewer players get suspended, the better it is for every team, and the less time we have to spend talking about whether or not a player really "gets it" because they got caught getting high. That's better for all of us.