After the Axe: A day with former Bucs coach Greg Schiano

An exclusive and entirely fictitious interview

Share All sharing options for: After the Axe: A day with former Bucs coach Greg Schiano

It's the nature of the NFL - you're a member of the world's most elite athletic club until you're not. Teams move forward, but what about the former coaches and players left behind? AFTER THE AXE sits down with those banished from football Eden to find out.

It's 11:10 in the morning, and I'm meeting Greg Schiano in the breakfast room at the Hot Springs Comfort Inn & Suites. Breakfast has been over for forty minutes now, but Schiano doesn't seem concerned when I point that out. 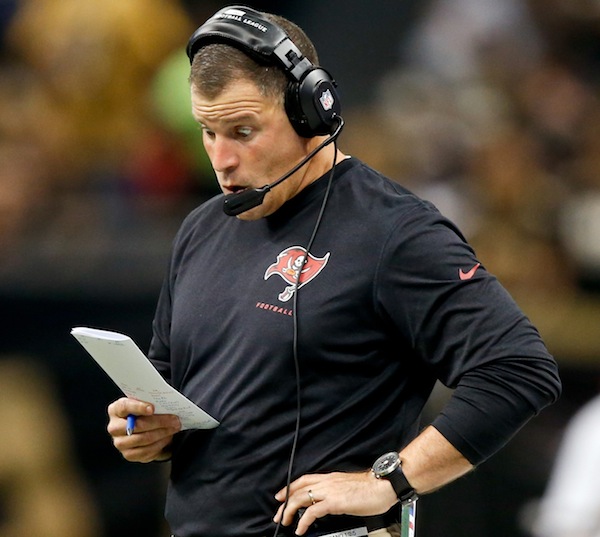 "If I wanted to waste time eating couch stuffing masquerading as cheese danish, I'd go spend Thanksgiving with Norv Turner," he tells me. "Besides, if breakfast is the most important meal of the day, shouldn't it be the most expensive? You wouldn't send your pregnant wife to a free continental obstetrician, would you?"

The former Buccaneers head coach is all potential energy on this morning, and friends have told me he's been this way ever since Tampa Bay gave him his walking papers. Schiano spends hours mowing his lawn (and those of his neighbors) over and over; his wife had the blade removed weeks ago, but Schiano never seemed to notice or let it slow him down. Like a shark, he needs constant motion to survive.

Also like a shark, he is not a great football mind.

"The NFL wasn't ready for someone like me because I ask too many questions and challenge convention in ways they don't understand. Take timeouts. Most coaches teach their players that a timeout stops the game. But that's just because both teams agree on that outcome."

Schiano's sweating quite a bit at this point, though the room is chilly. The manager on duty gives us a concerned glance but decides not to bother. He likely wouldn't impede the diatribe in any event.

"Say we've got the ball on the other team's thirty with five minutes left. It's third down, and we come out in a formation they weren't expecting, so they call a timeout. I'm telling my guys to run the play anyways. You wanna stop playing because you're not ready? That's not our problem. We're ready to go, so we're going."

It's worth noting that I've yet to ask Schiano a question, or even introduce myself. When I finally get an opportunity to speak, I suggest we move to a conference room or somewhere else with some privacy.

"Oh, I'm not a guest here. Hotels are a racket. The human body can, and does, sleep anywhere. For FREE."

Though I'm sure no good answer will come from it, I have to ask - if Schiano's not staying at the Comfort Inn, and he's not interested in swiping a free individual-sized bowl of Cocoa Puffs, why are we here? And that's when Schiano lowers his voice from the talk-scream hybrid he's been using all morning.

"I've got plenty of objections to the hotel industry, mostly based on the Third Amendment. But I'm willing to concede they got one thing right: unsupervised gym equipment." And that's when he pops out of his seat and walks out of the breakfast room, barely giving me time to gather my things.

"Sure, they'll say you need a keycard to get in. Let me tell you what - the best keycard in the world is confidence."

Schiano spends the next few minutes jigging the handle to the Comfort Inn workout center and grunting. A woman approaches the door and, with a concerned look, inserts her keycard, prompting Schiano to scream "CONFIDENCE WINS" at her; she runs off, terrified. Schiano doesn't even seem to notice, as he's already in the workout center beginning his - well, I'm not sure what to call it.

It's exercise, but not like you're used to seeing. A few examples:

More from the Hot Tub

Pete Carroll was an ace recruiter at USC. He's now the head coach of the Seattle Seahawks, which is not a college football team, but he still wants your talented sons to feel like part of his family.

More from the Hot Tub

- Schiano gets down into a seated position on the ground perpendicular to a rowing machine. He puts his feet on the machine, keeps his arms raised, kicks the machine over, and then jumps to a standing position so he can put it back in place. He repeats this ten times or so.

- Next, he moves on to an inclined bench press station. Schiano removes the barbell, then bear hugs the bench and tries to drag it around the room for as long as he can.

- There's also a part where Schiano tries to fit an entire kettlebell in his mouth.

The whole thing is very high intensity, in part because that's just how the man lives and in part because we're not supposed to be here and the chances someone with the hotel finds that out are high. Schiano never seems truly winded, though. If anything, the physical activity seems to stimulate his pontification.

"Invention has never been dominated by people who follow the rules," he bellows, "and I aim to be football's goddamn Thomas Edison." Then he wipes his forehead and goes back to lashing the water cooler to a treadmill.