Is the NFL suspending players more often in recent years?

Share All sharing options for: 2014 NFL suspensions starting to show similar rate to 2013

The 2014 NFL season is still months away, but the league has already suspended six players for violations of the substance-abuse policy.

April and May have been particularly active for the NFL in terms of suspending players. Colts defensive end Robert Mathis is the latest player to be suspended from the league, getting a ban of four games. Mathis released a statement explaining his side of the story, saying he and his wife were trying to get pregnant. Mathis claims he failed to counsel the NFL Players Association about the fertility drugs he was taking, but was assured by his doctor that there was not an illegal substance.

The NFL released a counter-statement, standing by its decision to levy a suspension on the Pro Bowler. Mathis is not the only one to lose upcoming playing time (and paychecks) in recent weeks and months. Along with Mathis, the NFL has suspended Washington Redskins tight end Fred Davis and defensive end Brandon Moore, Philadelphia Eagles linebacker Jake Knott, Carolina Panthers defensive end Frank Alexander and St. Louis Rams wide receiver Stedman Bailey.

Other than Davis who received an indefinite ban, the other five players including Mathis all were given bans that will last a quarter of the regular season.

The policies banning illegal substances (drugs and PEDs) were put into effect before the 1989 season and the results were encouraging. In the first year of testing, 16 players were suspended under the guidelines. Players quickly cleaned up their acts, with only 15 men getting suspended during the entirety of the 1990's.

However, from 2000-2009, 46 players ran afoul of the policy, including 10 in 2007 alone. This decade, the NFL has already punished 69 players under the substance-abuse or PED guidelines. The year-by year breakdown: 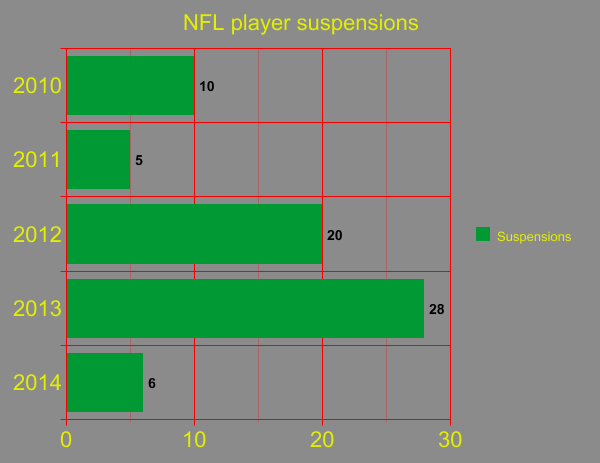 Like last year, five players have been suspended in April and May (Davis was banned in February). Jacksonville Jaguars wide receiver Justin Blackmon and Seattle Seahawks linebacker Bruce Irvin were among the high profile violators last year, along with Rokevious Watkins and Isaiah Pead of the Rams, and Arizona Cardinals linebacker Daryl Washington.

The league didn't always have such a high volume of suspensions in the offseason. Last offseason was the first in which multiple players were getting suspended in the months of April and May. The suspensions started coming more rapidly over the summer, with another 15 players getting suspended before the start of the regular season.

Why does the NFL continue to punish itself, its teams, and its fans over players who smoke weed?

In 2012, only eight players were banned for violating the policy before the start of games. Phillip Buchanon of the Redskins was the only preseason offender in 2011.

A report earlier this month suggested that the NFL could be looking to raise the testing threshold for marijuana in a player's system, potentially cutting down on the number of punishments handed out for pot. However, that could come in exchange for unilateral appeals in front of Roger Goodell for HGH testing.

If nothing else, Goodell can be credited with taking a hard stance with the league's drug program. The commissioner hasn't been shy about establishing a standard of conduct. Now it's a matter of waiting for the players to follow suit.