The actual worst places to host a Super Bowl

Minneapolis is WAY better than a driveway basketball court.

Share All sharing options for: The actual worst places to host a Super Bowl

You are already familiar with the pattern. A Super Bowl is awarded to some city other than San Diego, New Orleans, or Miami, and the harrumphs of the multitudes echo across the nation. The weather stinks! They don't have enough hotels! I don't know which restaurants to expense! Don't you remember how we nearly died in Jacksonville?!?!

Let's try to have a little perspective here, people. Minneapolis isn't the worst place to hold the Super Bowl. In fact, it's not even on the top ten:

One of two inhabited places on Earth to ever record a temperature below -76 degrees Fahrenheit. The ground is permanently frozen, and in December the town gets about three hours of daylight. Oymyakon has a population of 472, which is likely not even enough to operate a full set of food and beverage concessions. Based on the below improvised map, the town has a stadium. It appears to be slightly smaller than the cemetery. 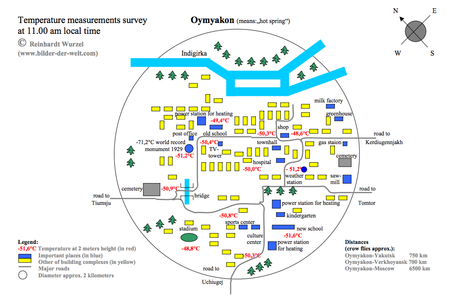 The bigger cemetery, that is. Oymyakon has two.

Brian told everyone that his dad had just put in a new basketball hoop at their house - stuck in the ground, with concrete and everything, not just some water-filled base situation - and said it would be perfect for three on three. We were all pretty excited, because the courts at the YMCA were really hard to reserve and inevitably some high school kids would come along and tell us to play them for the court or leave.

But Brian didn't tell us that his dad had screwed up setting the hoop up and now it listed about six degrees off center and the backboard was at a weird angle, too. Nor did he tell us that his mom wouldn't move the car because "some idiot teen is going to back into it if I leave it on the street." And he definitely didn't tell us that there wasn't really enough room on the driveway for a full three point line; it just looked like he'd drawn the top half of the letter D.

And then Brian's mom tried to give us carrot sticks for a snack. CARROT STICKS.

8. Inside a blue whale

Though it is regularly depicted as a place where a person could live and move about freely for days, if not longer, the digestive tract of a blue whale would not, in fact, be habitable. A blue whale would also not grow enough to house a regulation football stadium. Not even for an Arena League game.

Even if you could control the rest of the traffic, it's a damn highway with a FireBus that moves on its own. You can't have that at the world's biggest sporting event. Maybe in the Wild Card round, sure. But not the Super Bowl.

Look, we've all heard that it's beautiful and breathtaking. And I'm sure you had a great time when you visited there during Study Abroad. Yes, I saw your pictures on Facebook. Of course, I didn't look at all of them. I still got the gist. We're not having the Super Bowl in Machu Picchu. Because it's too far and hard to get to! And it would be disrespectf-you know what? This is ridiculous. I'm telling the RA I want a new roommate next semester.

Why would you even suggest this? Even a child can tell you this is unworkable. And I don't even think what you're describing exists.

The aquarium is a popular and fun place to visit because it is both educational and enjoyable. Young and old alike can delight at the many different species that call the sea home and walk away feeling a greater appreciation for the wonders of ocean life. And many aquariums have developed interactive exhibits - touch tanks, for example - that allow visitors to get even closer to these amazing creatures.

That said, the aquarium would not be a good place for the Super Bowl. I'm sorry. I really wanted it to work, too.

At the beginning of the 20th century, this was a reasonably prosperous mining town. Less than 100 years later, the site where the abandoned town once sat is covered by Lake Burbury. It would cost an enormous amount of money to dam up the lake to restore Crotty as a non-submerged area, ensure that the soil was solid enough to build a stadium, and then construct that stadium. The tax burden to local Tasmanians would be outrageous, and I'm sure the NFL would never reward a franchise for looting public funds like that.

A planet roughly 20,000 light years away from Earth that is estimated to have a surface temperature of about -370 degrees Fahrenheit. It is not believed to have any convention center or hotel space suitable for Media Days, and the time it would take to send the broadcast signal back to our planet would likely enrage many prop bettors.

FireBus Highway is a freaking palace compared to Bee Interstate.