How risky is it for early entrants in the NFL Draft?

A whopping 102 players gave up college eligibility to enter the NFL Draft. For some, that was a wise decision. For others ... not so much.

Share All sharing options for: How risky is it for early entrants in the NFL Draft?

More than 100 players opted to forgo remaining college eligibility and enter the NFL Draft. For some -- like Jadeveon Clowney -- the decision was a no-brainer. A guaranteed first-round pick, Clowney would have delayed and possibly risked millions by returning to school. For many others the decision to leave school early didn't result in as prosperous an outcome.

Deciding whether to stay or go can be a difficult task. While players can ask for an opinion from the NFL College Advisory Committee and gauge their stock from the various NFL Draft analysts, there is no surefire way to know where they will be drafted. The deadline to enter the draft early comes in the middle of January, nearly four months before the draft. A lot can happen in four months and a player can see his perceived stock drop dramatically. Once you're in, you're in for good and there is no going back. A total of 98 players were granted special eligibility for the 2014 draft with another four entering after earning their degree, but with eligibility remaining. That leaves a total of 102 players who opted for NFL minicamps instead of summer classes.

The good news is 15 of those players were drafted in the first round and will receive multi-million dollar singing bonuses. The bad news is 39 of the 102 players weren't drafted at all. Those players are lucky to get a five-figure signing bonus as an undrafted free agent, or even sign at all. Let's take a closer look at how the early entrants fared. 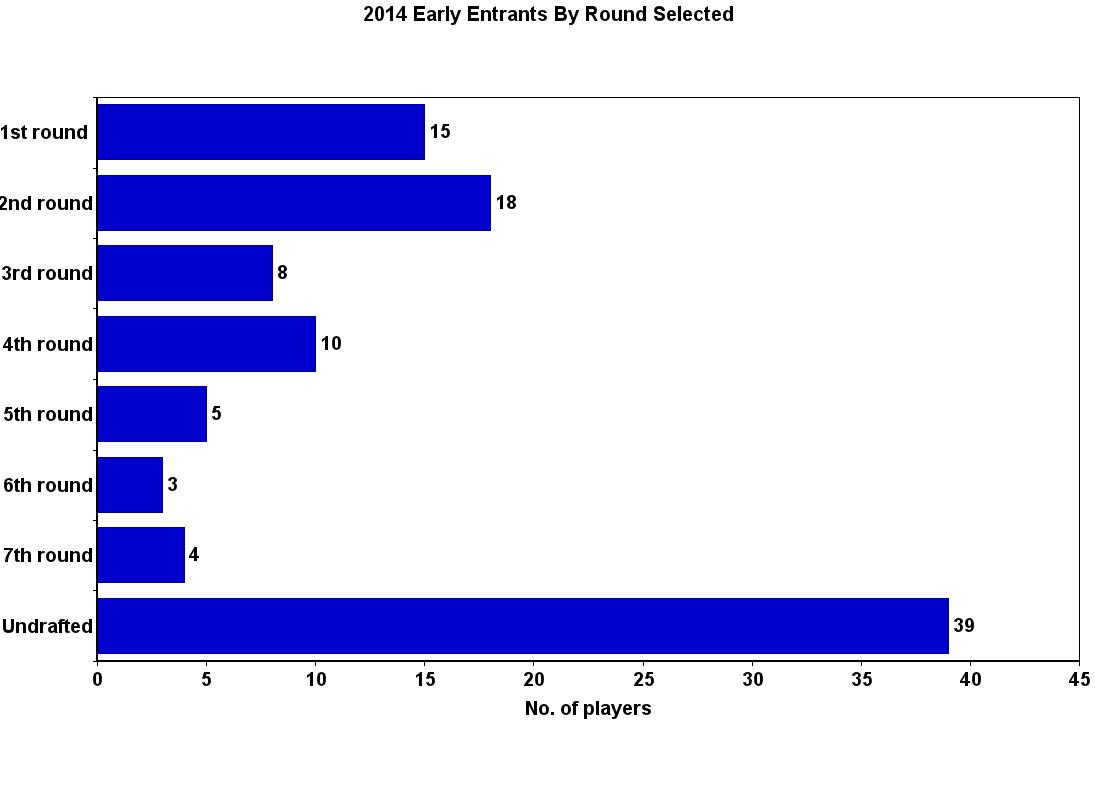 Early entrants made up slightly less than half of the first-round picks, including the first four picks in the draft. All of the players obviously made wise decisions and are now guaranteed millions. Teddy Bridgewater, the final pick of the first round, received a $3.3 million signing bonus as part of his rookie deal. Some of the players selected late in the first round may have been able to improve their stock slightly with another year. But there is no guarantee of that.

While every player would like to be a first-round pick, that simply isn't realistic. The 102 early entrants would take up more than the first three rounds. Leaving school early isn't necessarily a bad decision even if the player wasn't a first-round pick. Those selected on Day 2 of the draft will sign a sizable rookie contract and receive a good opportunity to make the team and contribute. The investment cost of a second or third round pick makes it rare for that player to not make the team as a rookie. NFL teams are willing to invest development time in those picks. The players receive a six-figure singing bonus and can start building a NFL career. Some may have been able to improve their stock with another season, though you could argue they are better off establishing themselves now and working toward that second contract.

Day 3 of the draft is where early entrants might really start to regret their decision. The money and chances for making a roster drop significantly with each pick. Signing bonuses get much smaller too. Getting drafted still comes with an opportunity to make a roster, but teams are less reluctant to cut players picked in the later rounds should they struggle in training camp. Players going to be competing against veterans already on the roster. In some cases, they might be the second or even third player selected at their own position.

Another year of development at the college level may have benefited to the 22 underclassmen drafted on Day 3. The concept of getting a head start on working toward a second contract isn't a factor for most of these players. Making the 53-man roster is the primary concern.

While many of the Day 3 picks may have regretted the decision, the 39 early entrants who went undrafted were left to hoping for an opportunity. 31 of those players signed deals as undrafted free agents. Six others were invited to mini camp. Victor Hampton is yet to sign, and Adam Muema reportedly quit football. Of the six who earned mini camp invites, only Colt Lyerla signed a contract. That leaves eight of the 39 players off NFL rosters entirely. That number grew to nine on Wednesday when the Bucs released quarterback Brett Smith.

Smith was a three-year starter at Wyoming before entering the draft following his junior season. He signed with Tampa Bay following the draft, but apparently didn't impress in rookie mini camp and was released in favor of Alex Tanney. That shows just how little margin of error undrafted free agents have. A bad practice or two and their chance to make a roster might be done. Of the 39 undrafted underclassmen, only Bailey and Hubbard already earned their degrees, according to the NFL.

The prevailing thought used to be that running backs should head to the NFL as soon as possible. Now, with the value of the position declining in the NFL, the opposite may be true. Twenty running backs declared for the draft early, but just four were selected before Day 3. Just seven were selected during the first five rounds of the draft and only 10 of the 20 were picked at all. 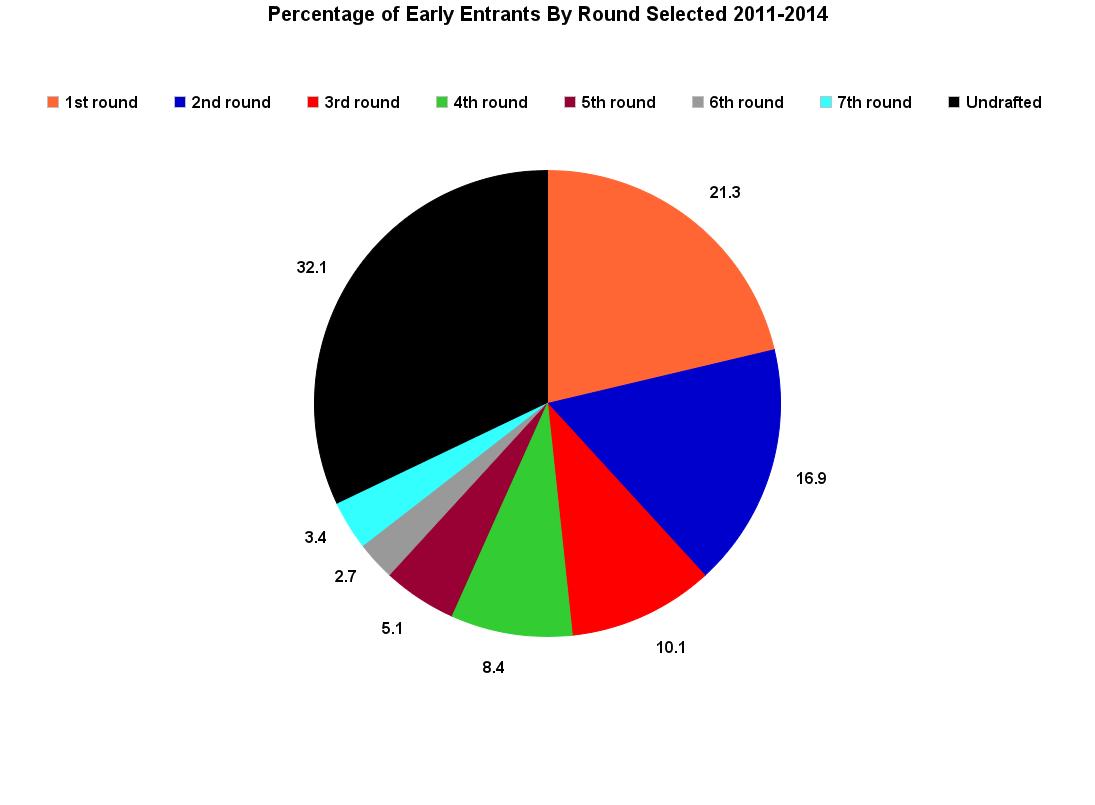 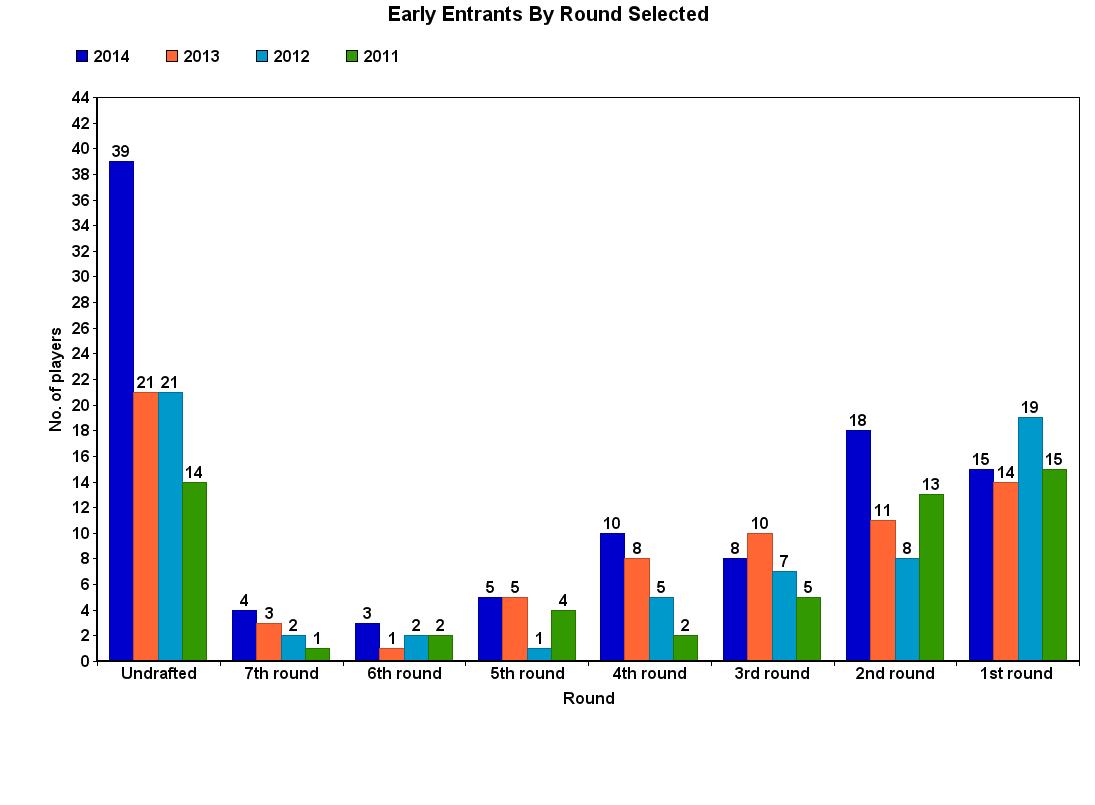