Odell Beckham's fake fiancee might not even be a real person

New York Giants first-round draft pick Odell Beckham has been at the center of a bizarre story involving a woman who claims to be his ex-fiancee. Only Beckham has never met her and she likely doesn't exist, according to a report from The Big Lead.

The whole thing began in January, when someone registered a website for the "Official Erica Mendez," which is helpful in case you thought you were visiting the fake Erica Mendez page. The website claims that Erica is an entrepreneur and writer who is working on her own lip gloss line as well as a memoir. Here's a quick sample of one of her blog posts, lest you be suspicious about her "writer" claim:

The story unfolded, as they tend to do, through a site called Baller Alert, which as far as I can tell is a website for people to email unconfirmed rumors and stories about hooking up with pretty much anyone famous with no vetting process whatsoever.

Some emailer wrote in with a story about a one-night stand with Beckham, and she casually mentioned apropos of nothing that he was dating a model named Erica Mendez at the time. Then another story appeared on Baller Alert that happened to mention Erica Mendez's name a few days later. People who went searching for "model Erica Mendez" would soon find themselves at her website, which claimed among other things that she was engaged to Odell Beckham, and has long-standing business ties to the Beckham family. 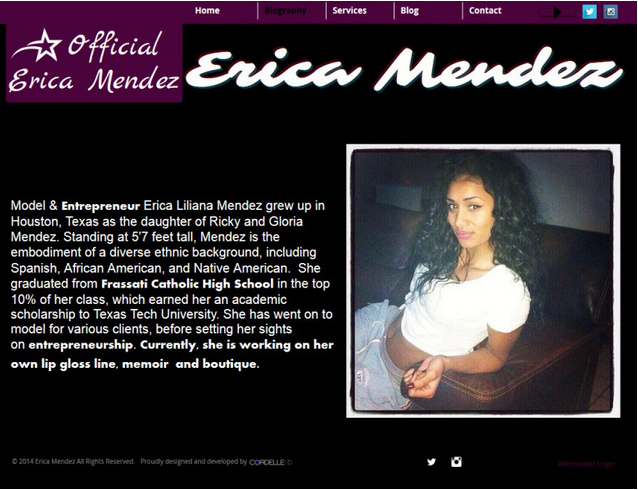 From there things started to snowball. There was a story about Erica Mendez which appeared on Radar Online, dragging Beckham's name through the mud and claiming he fathered a child with a mistress, and cheated on her with a couple of strippers.

A few months after the romantic proposal, she allegedly walked in on him – and two strippers – in a sexually compromising position at his parents’ New Orleans home.

"There were glasses thrown. It was quite a commotion," she said of the Aug. 2013 incident. "That was the final straw." The couple split soon after.

The Tonight Show's Jimmy Fallon even mentioned Beckham's model fiancee during a portion of the show that was taped before the NFL Draft, lending further credence to Radar Online's report. Beckham played it cool at the time, not wanting to dignify the rumors with a response, but he had never met Erica Mendez, and wasn't really sure why she was going after him.

The pictures on Mendez's "official" website are actually of two cousins: Dior Patterson and Jade Manning. The two had no idea that their likenesses were being used, and are considering legal action if they're able to track down the person behind the hoax. Patterson has even gone as far as to contact the host of MTV's Catfish, in hopes that the show can help shine some light on the issue.

Odell Beckham claims he's the target of a scam

The New York Giants rookie receiver says he's never even met the woman claiming to be his fiancee and accusing him of threesomes with strippers.

Odell Beckham claims he's the target of a scam

Mendez's intentions aren't clear, but at the very worst she (or he) went to a whole lot of trouble to make it look like she was connected to Beckham for business reasons. Beckham for his part did all the right things. He ignored the rumors in hopes they would go away, but eventually the noise got too loud and he had to go to NFL security with it. It's a shame that he got dragged so far into this story, but this type of thing will probably continue to happen more and more frequently even if the players stay out of it.