The draft is an inexact science, but it has some very exact measurements when it comes to trades.

When Jimmy Johnson took over the Dallas Cowboys in 1989, the organization was in shambles. Outside of a few players like Michael Irvin and Jim Jeffcoat, the team had very little talent, leading to a 1-15 campaign in Johnson's first year.

During that season, Johnson traded his best player, running back Herschel Walker, to the Minnesota Vikings for eight draft picks, including a trio of firsts and seconds. Johnson ended up using those picks, along with his original selections, to build a full-blown dynasty behind the likes of Troy Aikman, Emmitt Smith, Darren Woodson and others.

The buildup to the NFL Draft is complete with the first round finally beginning tonight. Matthew Fairburn and Dan Kadar offer up their final first-round predictions.

Johnson loved trading back in the draft, and he wanted to set some parameters to guide his decisions. The result was what became known as the Draft Trade Value Chart, a system that designates numerical values to every pick in the draft in order to systematically gauge potential trades. It's now used as the default draft-day trading guide.

The modern chart begins with a value of 3,000 points for the No. 1 overall pick and descends down to two points for the 32nd pick in the seventh round. 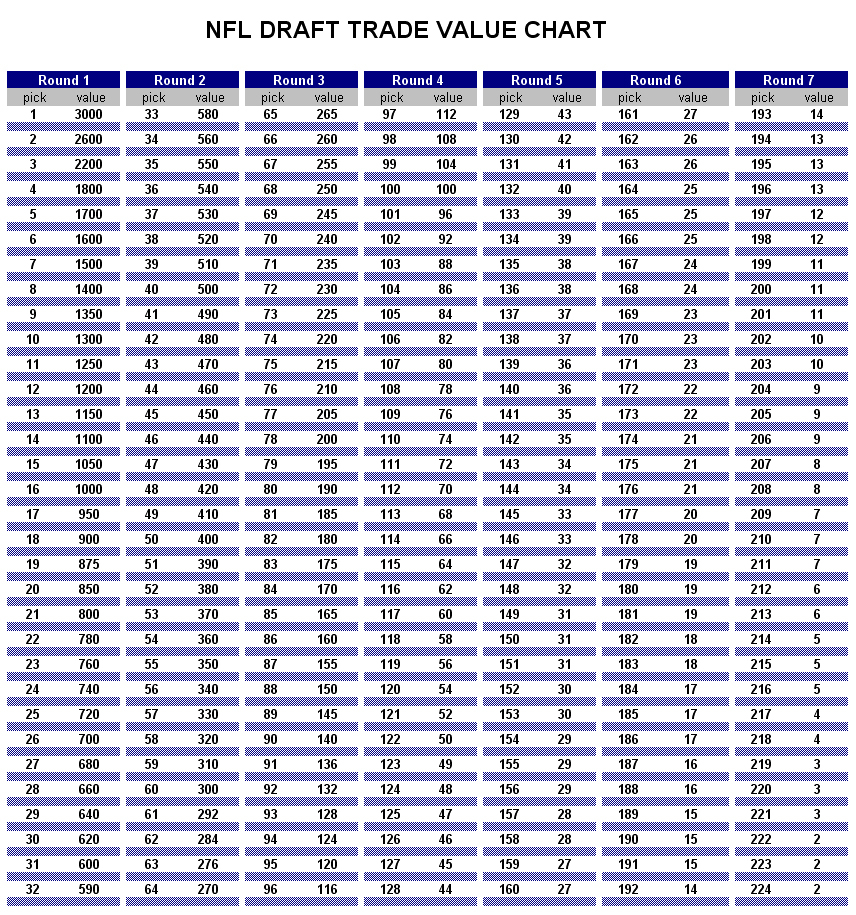 So let's lay out a real-world example in this year's draft. There's been a lot of talk about the Atlanta Falcons trading into the top five, so let's say they're making a move for the No. 3 overall pick owned by the Jacksonville Jaguars. The No. 3 pick is worth 2,200 points, so the Falcons would have to package enough picks together to have a combined value of at least that much. By giving up their first rounder (No. 6), second rounder (No. 37) and fourth rounder (No. 103), Atlanta could offer a total value of 2,218.

Teams don't necessarily adhere strictly to the chart. In the highest pick-for-pick trade in the 2013 draft, for instance, the Cowboys traded the No. 18 overall pick to the San Francisco 49ers in exchange for Nos. 31 (first round) and 74 (third round). Dallas's side of the bargain was worth 900 points, while the Niners' was just 820.