Be careful what you put on social media. Some corporation might use that against you in arbitration.

Jimmy Graham gets his day in court, er, arbitration on Tuesday. Stephen Burbank, designated settler of (some) disputes by the 2011 collective bargaining agreement, will listen to arguments and determine whether or not Graham is designated as a wide receiver or a tight end for franchise tagging purposes. 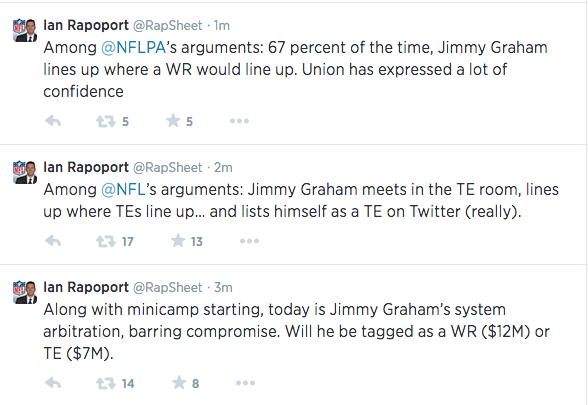 Yes, Graham's Twitter bio is going to be used against him. Your teachers can also use that bit of evidence to remind you to be careful about what you share via social media.

The franchise tag for tight ends is $7 million. It's $12.3 million for receivers.

Graham led the NFL with 16 receiving touchdowns in 2013. His 86 receptions and 1215 yards left him just outside the top ten in those two categories. So let's take a closer look at the NFL's evidence.

Wait a second, private pilot? Hmmm, that sounds like something only a tight end would do, doesn't it? Also, DEMPSEY!!!

In my own research, I found another potential smoking gun on Graham's page at Pro Football Reference. Exhibit J:

Look at that, his 2013 lists him as a "TE/wr," which is good enough for me. Bending the goalpost is obviously a wide receiver trick too, because why not.

Give the NFL credit here. It already has the most team-friendly CBA, with non-guaranteed contracts. Now, they're going to arbitration with one of the league's superstars to try and save $5 million.