Can Mike Wallace live up to his paycheck this year?

Wallace failed to meet the expectations that came with his monster contract in Miami last season. Can he turn things around in 2014?

Share All sharing options for: Can Mike Wallace live up to his paycheck this year?

Mike Wallace has the third-highest annual salary in the league among wide receivers, behind only All-Pros Calvin Johnson and Larry Fitzgerald. That makes the fact he finished the 2013 season tied for 28th in receiving yards hard to swallow for the Miami Dolphins. Among receivers, only Megatron has more guaranteed money wrapped into his contract, yet Wallace finished tied for 38th in 2013 touchdown receptions.

The Dolphins signed him to a five-year, $60 million deal last offseason, and Wallace took the field with soaring expectations. A disappointing campaign saw him finish with fewer than 1,000 yards and the lowest touchdown total of his career. The pressure's on to live up to his paycheck in 2014. 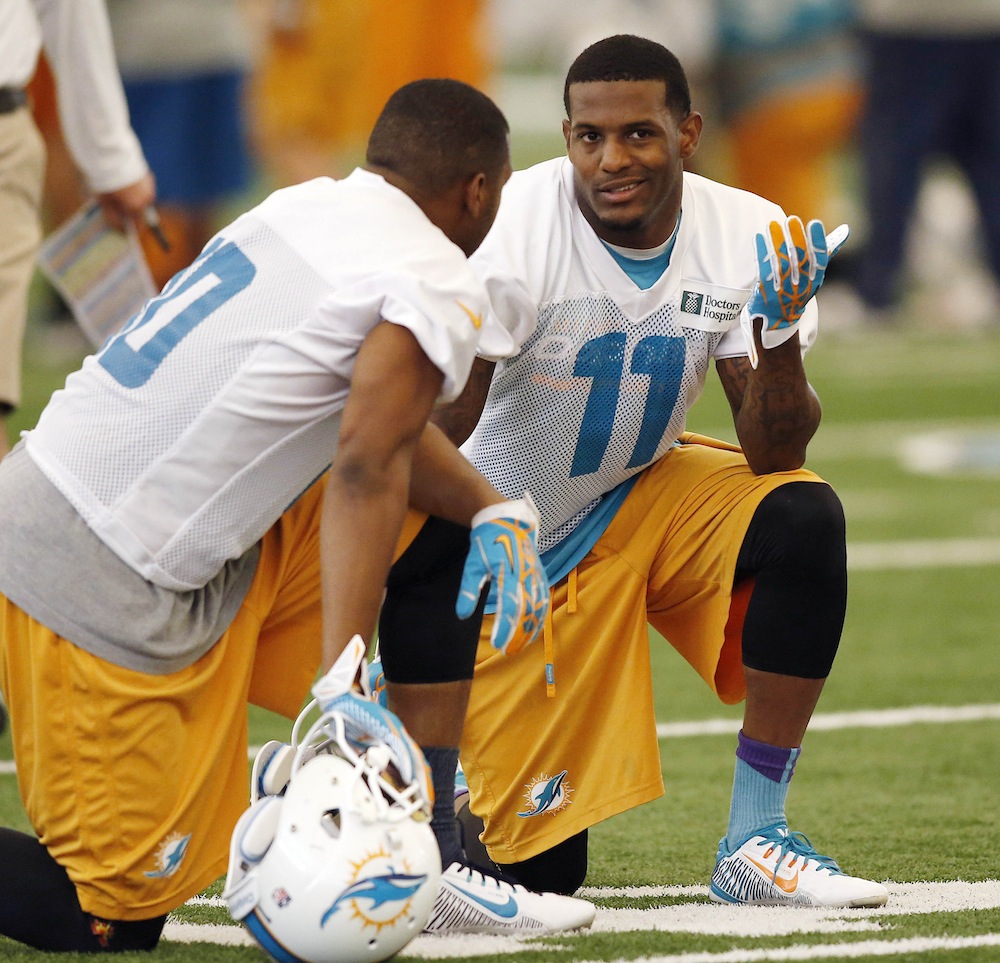 When Wallace landed his free agent deal with Miami, he was coming off a three-year run with the Pittsburgh Steelers in which he averaged 1,095 yards and over eight touchdowns per season. The Dolphins, who ranked 26th in the league in passing the previous season, were looking for a home run threat to liven up their offense; Wallace's career 17.2 yards per reception looked liked the answer.

But Wallace was far from the explosive player he was in Pittsburgh. He averaged a career-low 12.7 yards per catch and caught just 11 passes of 20 yards or longer. His game-to-game production was boom or bust: in his 16 games, he had more than 100 yards in four of them and 25 yards or less in six of them.

The biggest risk with Wallace is a financial one

Not all of that can be laid at Wallace's feet. He and second-year quarterback Ryan Tannehill struggled to build chemistry through much of the season. Miami's offensive line, decimated by lack of planning, injuries and the Jonathan Martin scandal, allowed the most sacks in the league, meaning Tannehill often didn't have time to find Wallace on the deep routes that he thrives on.

In addition, The Phinsider's Kevin Nogle says that much of Wallace's production, or lack thereof, can be attributed to the team's one-note approach on offense:

Under previous coordinator Mike Sherman, Wallace lined up on the right side of the offensive line for over 90-percernt of the offensive plays. There was no motion. There was no looking for mis-matches. It was simply, here's Wallace, now try to stop him. It ultimately let defenses design schemes to take Wallace away from the offense, and turned the speedster into a highly paid decoy.

The biggest risk the Dolphins run with Wallace is a financial one. Because they have $30 million of guaranteed money invested in him, moving him is unrealistic for at least another year. Were the Dolphins to trade or release Wallace in 2014, they would be stuck with a $26.8 million worth of dead money on their salary cap.

The dead money amount drops to $9.6 million in 2015, but that's still a massive amount for somebody that's not on your roster. Barring restructuring his contract, the Dolphins probably won't be able to move Wallace until 2016.

Do the Dolphins have depth at WR?

The sixth question on depth from CBS Sports takes a look at the receiver corps.

Do the Dolphins have depth at WR?

Wallace hasn't lost his big-play ability, as evidenced by the handful of games in which he went for more than 100 yards receiving in 2013. In those four contests, he averaged 16.7 yards per catch, four yards higher than his season average. His rapport with Tannehill showed signs of improvement down the stretch: four of his five touchdown receptions came over the final six games.

The key for Wallace will be establishing better timing with Tannehill on the deep ball. That should get easier with the addition of Brandon Albert at left tackle, a move that shores up the left side of the offensive line and will give Tannehill more time in the pocket.

"Definitely have got to get the deep ball going," Wallace recently told The Miami Herald's Barry Jackson. "That's the difference between winning and losing a couple games. I should have had 15 or 20 more touchdowns. And that's being modest. If you press me, you have no shot to cover me. Once I get you to stop your feet, it's over."

At least we know Wallace isn't lacking in confidence.