The former first-rounder has been written off by most, but the Titans quarterback could be the NFL's biggest surprise in 2014.

Share All sharing options for: Titans betting the franchise on Jake Locker

First-round bust or franchise quarterback? Three years later, the question marks surrounding Jake Locker are as relevant as they were his rookie season.

When the Tennessee Titans selected Locker at No. 8 overall in the 2011 NFL Draft, Locker was hardly a sure thing. Scouts praised his physical attributes (his incredible arm strength, his overall athleticism, his ability to extend plays) while simultaneously raising just as many concerns (his decline in accuracy, his questionable decision-making, his poor performances in big games). Locker was clearly a project.

Still, the search for a franchise quarterback brings most teams to their knees at one point or another, and the Titans are no exception. This year, they're hoping to finally find out the answer to their questions. 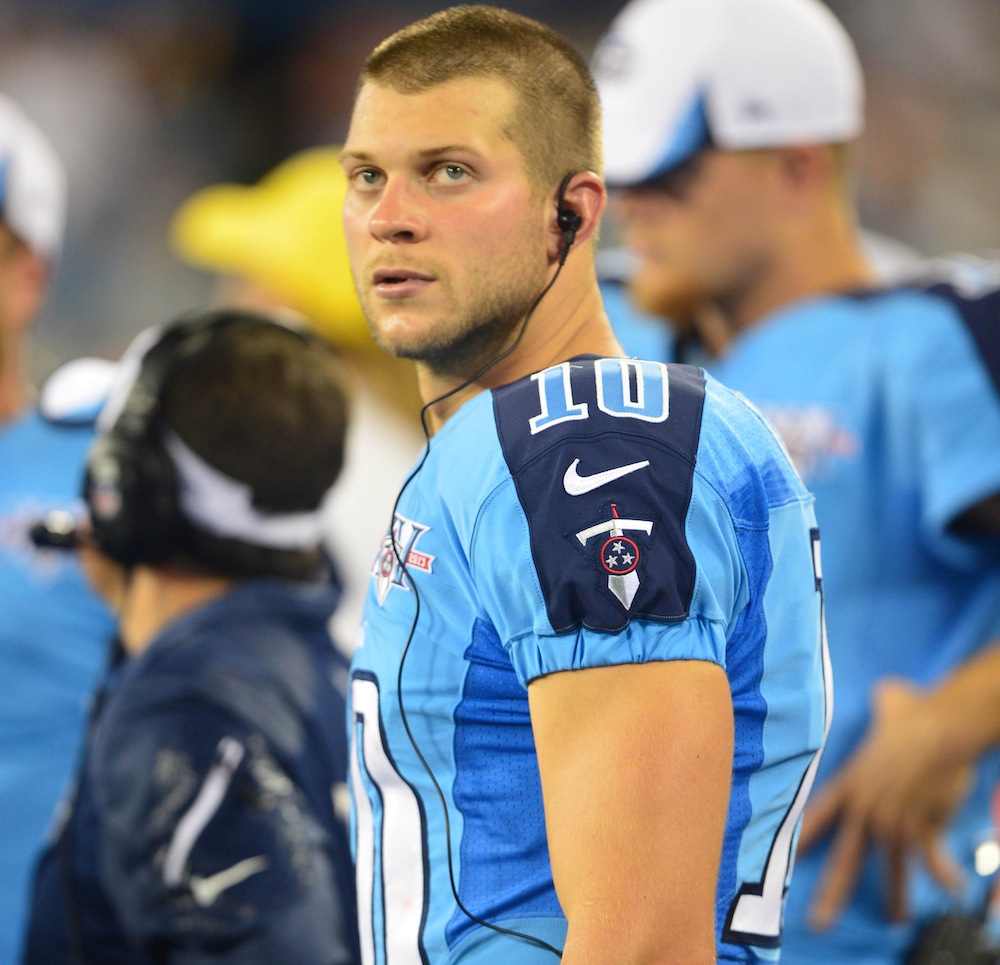 Jake Locker is an easy target these days. Many fans have already labeled him a bust, and rumors swirled in the offseason that the Titans were aiming for major moves at quarterback. Yet after free agency and another draft, Locker is still in the driver's seat as the Titans' starting quarterback.

There's merit to much of the criticism that comes with Locker. Injuries and inconsistency have stymied progress, not only for Locker but the team as well, and it's hard for a team to hang their hat on an unpredictable hook year in and year out. Talented or not, Locker needs to stay healthy. Even the team's general manager, Ruston Webster, admitted as much in a recent Sirius XM interview when he said, "The bottom line is that it's hard to lead if you're not out there."

"The bottom line is that it's hard to lead if you're not out there."-Ruston Webster, Titans GM

During his rookie season, Locker sat behind Matt Hasselbeck, but he took over as the Titans' starter in 2012. Unfortunately, he's been unable to give the team anything close to a full season. In 2012, Locker fractured his non-throwing shoulder and missed five games in the middle of the season. He ended up having surgery that next offseason. Last season, Locker missed two weeks with a strained hip, and didn't play after Week 9 due to a Lisfranc injury.

Through his first three years in the NFL, Locker has only started 18 games with an 8-10 record to show for those starts. He holds a 57.9 completion percentage in his two years as the Titans' starter, with 18 touchdowns to 15 interceptions.

In short, it's not hard to find why Locker has his detractors.

While Locker's performance to date mirrors the questions coming into the Draft, Titans fans have reason to hope that the former Washington Husky could provide a proportional return on the investment.

The first few games of the 2013 season provided glimpses of a franchise quarterback in the making as the Titans impressed with a 3-1 start. Through the first four games of the season, Locker had thrown six touchdowns to zero interceptions and had completed 62.1 percent of his throws, good for a 99.0 quarterback rating. In addition, Locker had made plays with his feet and displayed significant steps forward in his decision making. The results included impressive wins against the Steelers on the road and the Chargers at home. Unfortunately, Locker's injury brought the Titans' success to a grinding halt. The team won two of their next 10 games, and Mike Munchak was fired shortly after the season ended. 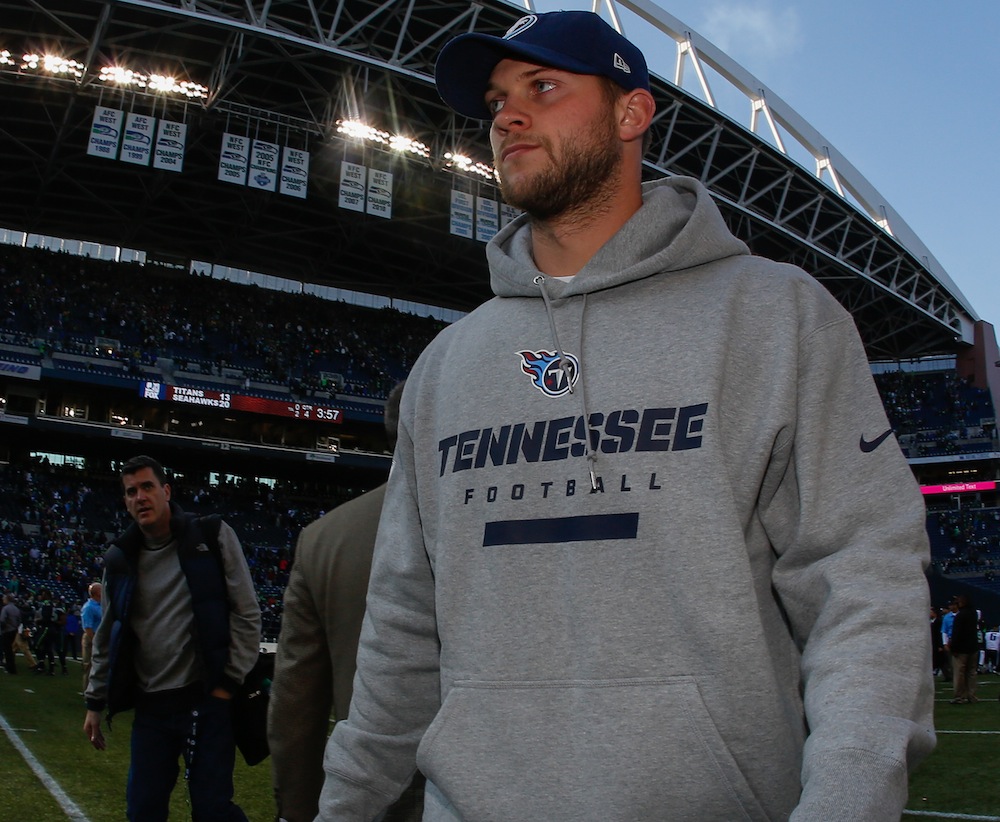 The good news is that Locker is now healthy. Jim Wyatt of The Tennessean highlights Locker's work to return from injury as his first positive take from the team's recent minicamp:

He exceeded expectations. He did more, and looked better doing it, than I thought he would. And I don't think I'm alone in that opinion. Locker and his coaches said his workload was about what they expected coming off November's Lisfranc surgery. But there's no question he will be ahead of the curve when camp begins.

Webster also noted that their success with Locker at the helm was not lost on the front office.

We felt like last year, we were winning ball games with him. He was playing well. He wasn't turning the ball over. He was making strides. That was what was so tough about last season, losing him, but that's what gives us hope, too, that every year he's gotten better. I don't think a lot of people know Jake, but he's such a hard working, tough guy and a leader. He's really a guy that his teammates rally around.

If actions speak louder than words, the fact that the Titans failed to address the position apart from minor moves (drafting Zach Mettenberger in the sixth round, signing Charlie Whitehurst) speaks confidently of his immediate future as the team's starter.

State of the South

The road to AFC South supremacy runs through Indianapolis. There's no questioning that one. As long as Andrew Luck stands under center, the Colts will be the odds-on favorites to take the division title. Even the potential ascension of Jake Locker to franchise quarterback likely won't be enough to top the Colts. It is worth noting, however, that there's not a worse division in football.

The Houston Texans were the worst team in the NFL last season and are somehow holding their heads high with a quarterback roster of Ryan Fitzpatrick, Case Keenum, and Tom Savage. The Jacksonville Jaguars weren't much better last year, and although Gus Bradley has them headed in the right direction, they'll likely sit at or near the division's basement until Blake Bortles takes the reins. The two teams comprise one quarter of the Titans' schedule.

It is worth noting, however, that there's not a worse division in football.

Even the Colts aren't invincible atop the division's hill. Despite their playoff appearance, several teams dominated them throughout the season, including the Cardinals, Rams and Chargers. In the playoffs, the Chiefs appeared poised for a blowout before blowing the game themselves. The Patriots finished the job. The Colts, at many points, seemed to lack discipline and allowed the game to get out of hand early.

Even the Titans came close to beating the Colts at home in Week 11. The Colts came out at halftime with the right adjustments and overcame a 17-3 deficit for a 30-27 win, but the Titans muted Luck's big-play ability and should carry confidence into their head-to-head match-ups in 2014.

In summary, the AFC South is ripe soil for one team to grow in the shadow of the Colts and perhaps even surprise. The Titans have every reason to believe it could be them.

As For the Future

Earlier this offseason, the Titans declined Locker's fifth-year option, which means he's scheduled to become a free agent after the 2014 season. It clouds the future, but the present is still clear; Jake Locker is the starter. That should be enough, if he can stay healthy.

The Titans now boast their best offensive line in years, which should help keep Locker upright. The team drafted Bishop Sankey in the second round, and his skill set teams well with Shonn Greene to provide a solid running attack. All of this combined with a young, underrated defense means the Titans could surprise in the AFC South.

If so, they'd have Jake Locker, franchise quarterback, to thank for it.