Sure, he's got two Super Bowl rings, but what has Eli Manning done for the Giants lately? The pressure's on for the younger Manning brother to turn things around in 2014.

On Dec. 29 of last year, in a soggy, half-empty MetLife Stadium, Eli Manning's final pass of the 2013 season was tipped up into the air and intercepted. The New York Giants quarterback, who had tweaked his ankle on the previous play, could go no further. The final image of Manning in 2013 was him limping through the rain into the tunnel, the flaming wreckage of his nightmare season finally behind him.

It was a fitting end for a season that began the same way that it concluded: with an interception. Manning threw a league-leading 27 of those amidst a surprisingly poor 7-9 season in New York.

Giants fans are expecting an immediate turnaround in 2014, and deserved or not, a failure to do so will fall heavily on Manning's shoulders. 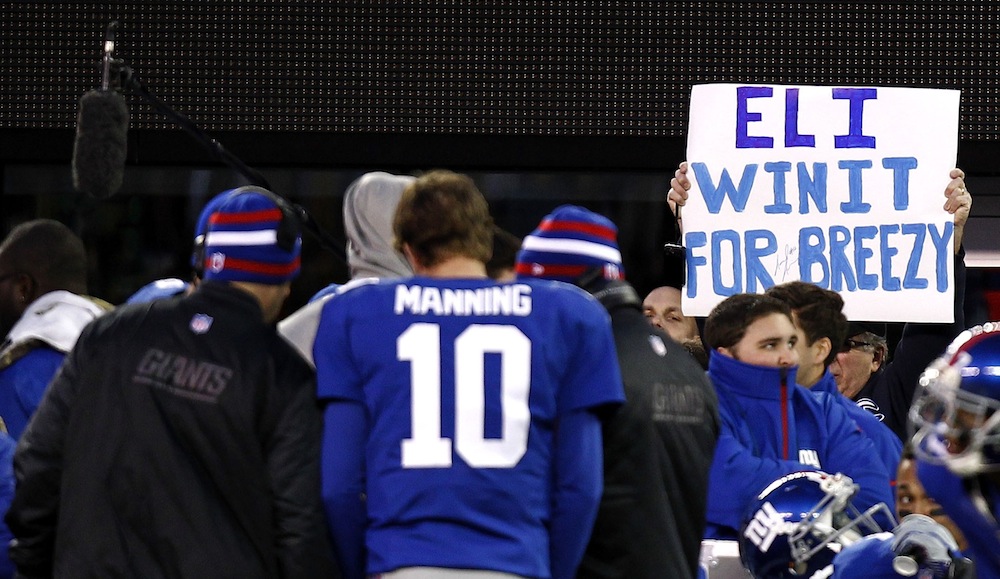 Manning is an easy and possibly oversimplified recipient of the label "underachiever" -- he was the quarterback of an awful team and his disappointment face leaves a lasting impression. In reality, the Giants' 2013 struggles had just as much, if not more, to do with a porous offensive line, a nonexistent running game and a receiving corps that seemed to run the wrong route every time the ball was snapped. 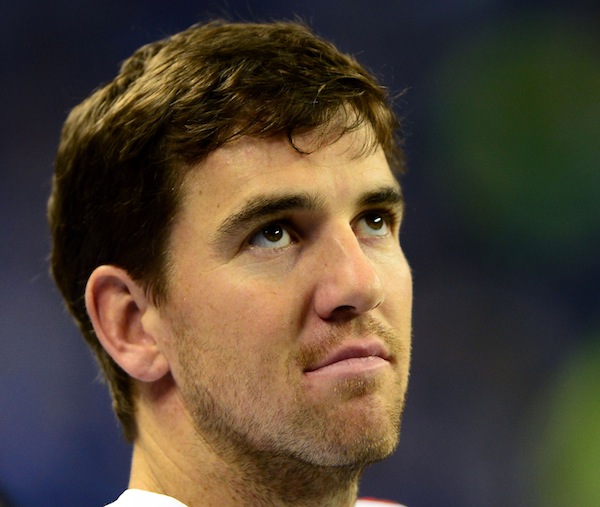 Still, whenever a two-time Super Bowl MVP leads the league in interceptions, it's fair to say he's underachieved. Manning certaintly didn't help himself with his inaccuracy and sometimes panicked decision-making. His 27 picks not only led the league, but beat out the closest competitors (Carson Palmer and Joe Flacco) by five. He had his least accurate season (57.5 percent completion rate) of the past six years and threw fewer yards than he had in any season since 2008. Manning threw fewer than 20 touchdown passes (18) for the first time since taking over as the full-time starter in 2005.

It's nearly impossible to imagine Manning losing his job in the near future, no matter how poorly he plays -- Super Bowl wins will buy that kind of leniency, even in New York. The fact that he's only 33 (his older brother just played in a world title game at almost 38) and has two years left on his contract means he's likely staying in New York for the foreseeable future.

With that said, another disastrous season like 2013 would likely prompt Giants brass to start expediting their post-Manning plans for the future. That could come in the form of an offseason trade or free agent signing to provide positional competition. More than likely, it could be in the form of a high-round quarterback selection in the 2015 draft.

Manning doesn't have quite the same ability that allows his brother to almost single-handedly win football games over the course of a season. He's more reliant on the talent level around him, something that became glaringly obvious last year. So the question is less about what Manning can do for the Giants and more about what the Giants can do for Manning.

Head coach Tom Coughlin expressed confidence that his franchise cornerstone could rebound to the form that propelled them to a pair of Super Bowls. Reacting to Coughlin's sentiments, Ed Valentine at Big Blue View laid out the stakes in no uncertain terms:

For the sake of the 2014 Giants, and maybe even for the impact of the upcoming season on the legacies of the quarterback and the coach, Coughlin had better be right. If he isn't right all the overhauling the Giants have done of the offensive coaching staff, system and personnel will be naught and the season will go up in flames.

At least on paper, they've done a lot. Odell Beckham Jr., the No. 12 overall pick of the 2014 draft, gives Manning a dangerous receiver on the outside to replace Hakeem Nicks. On the offensive line, second-round draft pick Weston Richburg should add stability at center and Geoff Schwartz provides an instant upgrade at guard. In the backfield, Rashad Jennings arrives from Oakland and the fourth-round selection of Boston College's Andre Williams could end up being a steal. On top of everything, offensive coordinator Kevin Gilbride has been swapped out for Ben McAdoo, who spent the previous two seasons working as Aaron Rodgers' quarterback coach in Green Bay.

All that offensive reconstruction should give Manning the tools to turn things around in 2014. On the other hand, it leaves little room for excuses if he doesn't.