Carpenter hasn't lived up to his first-round pick billing and is entering a make-or-break season. Will 2014 be the year he finally puts it all together or does Seattle have a major liability penciled in to start at left guard?

Since John Schneider and Pete Carroll arrived in Seattle, the Seahawks have hit a lot of home runs in the NFL Draft. Earl Thomas, Russell Wilson, Richard Sherman, Bobby Wagner, Kam Chancellor and several others were added in the draft. Seattle's Super Bowl roster was littered with homegrown players. Not every pick, however, has been a success story. James Carpenter has yet to live up to the expectations set for him when Seattle drafted him in the first round in 2011.

Carpenter and his massive frame should fit right into Seattle's mentality of playing hard-nosed football and controlling the game with the rushing attack. Looking at Carpenter, it seems like he was put on Earth to run block. While he's had his moments, he hasn't been consistent and his production is far from the level a team would expect from a first-round pick. Now, heading into his fourth season, Carpenter is likely entering a make-or-break season for his career in Seattle and possibly his future in the NFL. 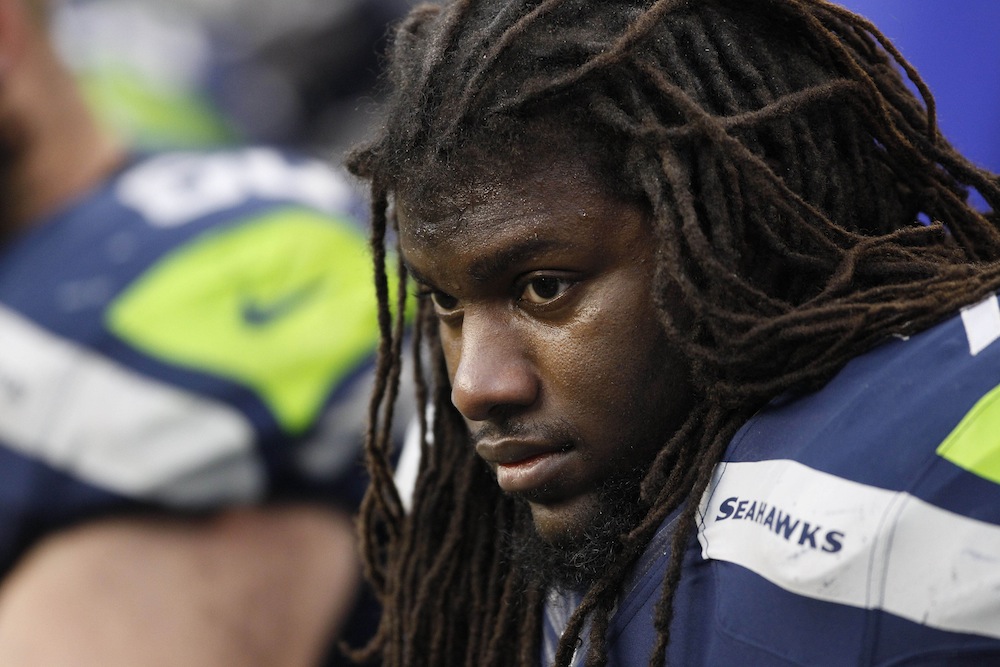 Like many of the players Seattle has drafted in recent years, a number of analysts thought Carpenter came off the board too early when the Seahawks picked him with the No. 25 pick in 2011. Even his college coach Nick Saban was surprised, with cameras catching him saying, "James Carpenter was drafted in the first round?"

Carpenter began his NFL career at right tackle and struggled early in his rookie season. According to Pro Football Focus, Carpenter gave up 23 quarterback hurries and six sacks in nine games. To make matters worse, Carpenter tore his ACL and missed the final seven games of the regular season. The Seahawks moved Carpenter inside to guard in 2010 and he returned from the knee injury in Week 4. The results on the field were similar. He struggled when he did play and was limited to just seven games due to a concussion and another knee injury. For the second straight year, he finished the season on injured reserve.

Injuries were less of a concern last season, and Carpenter played in 18 games, including 12 starts. His performance on the field remained uneven as he played in a guard rotation, swapping in and out of the lineup. At times, he more than held his own and used his size and strength to open running lanes for Marshawn Lynch. At others, he was a liability and lost playing time to undrafted rookie Alvin Bailey. Carpenter was a healthy scratch for Seattle's divisional round matchup against New Orleans before starting the NFC Championship game and the Super Bowl.

With his injury issues and up-and-down-play, the Seahawks declined Carpenter's fifth-year option, making 2014 a contract year for Carpenter, who is still young, having just turned 25. But his injury history and ineffective spurts on the field make his future doubtful.

Carpenter entered last season with a chance to compete with incumbent starter Paul McQuistan at left guard. He played well enough to earn some playing time, but the two spent most of the season in a rotation. Carpenter would play a series or two then give way to McQuistan for a series or two, each playing close to half the offensive snaps.

2nd-year players who must improve in 2014

Highly touted draft picks like Dee Milliner and Eric Fisher failed to live up to expectations as rookies. The success of their teams moving forward may depend on how well they bounce back in year two.

2nd-year players who must improve in 2014

Now, heading into 2014, McQuistan is in Cleveland and the starting left guard job is Carpenter's to lose. Seattle offensive line coach Tom Cable has consistently praised Carpenter this offseason saying he has gotten into better shape and is playing with more confidence, via Field Gulls:

"Confidence" is the big word when it comes to James Carpenter now as compared to the last few years. Said that it's now been a year and a half process to get him back from his knee injury, and admits they didn't handle it well. Carp's playing a different level and pace than he's done in the past.

Carpenter will have the benefit of a healthy offseason and is reportedly trending in the right direction, getting his weight closer to the 320-pound range. From all appearances, he's going to get an opportunity to own the left guard job, playing in between Pro Bowlers Russell Okung and Max Unger. Declining his fifth-year option was an obvious move as it would have paid him like one of the top guards in the league. Now, he'll get the opportunity to play for a second contract, in Seattle or elsewhere. If Carpenter can make it through a season healthy and the weight loss and improved confidence lead to a productive season, he could land a nice long-term deal. If injuries crop up again or Carpenter's play continues to be up-and-down, he may be lucky to find anything more than the veterans minimum on a one-year deal.

Being healthy, in better shape and confident is great, but that only goes so far. Eventually, Carpenter will have to line up against Justin Smith and other top defensive linemen and all the positive things said during the offseason won't matter.

Carpenter's success in 2014 is going to come down to two factors: Can he stay healthy and can he be an above average run-blocker? The health concerns are relevant with his previous injury history and will remain an unknown throughout the season. He proved he could avoid major injury for a season last year, now he'll need to do it again. His ability to run-block will be a major factor with Seattle relying on the ground game. With his size and strength, run-blocking should be Carpenter's strong suit, but according to Pro Football Focus, it was his biggest weakness last year. Maybe playing at a lighter weight will add some quickness and mobility. He proved last season he could hold his own in pass-protection, so even being an average run blocker would make him a very solid contributor.

The interesting thing about Carpenter is he hasn't been an underachiever in the sense that he just cant play. He's simply never been consistent. As Danny Kelly of Field Gulls detailed, Carpenter can be a beastly run-blocker. He just needs to do that consistently. Stamina and endurance could have been a factor before, so playing at a lighter weight might help there, too.

Carpenter has the physical ability, is fully healthy and has the backing of Cable. Still, he's never shown the ability to be an average or better player on a week-in and week-out basis so until he does that, it will remain a "I'll believe it when I see it" situation. Could 2014 be the year it all comes together? Sure. But, it could easily be another year where he shows little more than flashes.