Jordy Nelson and Randall Cobb have been the Packers' best receiving threats in recent seasons. With a wave of fresh talent hitting the depth chart, can they do enough to prove they should stay in Green Bay?

With Jordy Nelson and Randall Cobb each slated to enter free agency at the end of the 2014 season, contract extension talk regarding both star wideouts is warranted.

Just don't expect either of them to elaborate when it comes to the business side of football. Their focus is on Xs and Os and pushing one another to be the best, even off the field amid the competitive environment of OTAs and training camp. Via Lori Nickel of the Milwaukee Journal-Sentinel:

"We’re going to compete, said Cobb. "This is what the offseason is all about. From the weight room to answering questions in the meeting room, we have quizzes and stuff. Everything is built around competition here. We’re trying to push each other and trying to be the best group that we can be.

Cobb is a proven special teams star and broke out as a receiver in 2012 when he amassed 954 yards on 80 receptions in 15 games. The 23-year old has more time to develop and become an even greater threat in the dynamic offense led by quarterback Aaron Rodgers.

For Nelson, who is entering the prime of his career, a deal that made him 27th-highest paid receiver in the league back in 2011 likely won't be good enough. The 29-year-old is coming off his best season to date while starting in all 16 games, finishing with 1,314 yards and 85 receptions.

For his part, Nelson has made it clear he wants quick resolution and to remain in Green Bay, but knows it's not entirely up to him:

"Obviously, you want to get it done as soon as possible," said Nelson. "But there are a lot of other people that are involved in that. It’s a process and we’ll just have to wait and see how it goes."

Cobb is in the final year of his rookie deal and is slated to make just over $1M in total salary in 2014. He'll command more in free agency on the open market, but the question is how much?

The Packers also have to consider the contract of Jarrett Boykin, who filled in for Cobb last season because of injury. Boykin emerged last season as yet another viable passing target for Rodgers. In his second year, he caught 60 percent of the passes thrown his way for 49 receptions, 681 yards and three touchdowns. Though he has yet to prove himself to the same extent as Cobb and Nelson -- and frankly, his skill set makes him more of James Jones replacement, if anything -- the fact that the Packers have depth should give the team some bargaining power against its two pending free agents.

The team is also bringing in a trio of talented rookies in second-rounder Davante Adams, fifth-rounder Jared Abbrederis and seventh-rounder Jeff Janis. Adams has a wide build and sure hands, both of which could make him an immediate rookie contributor. Abbrederis, meanwhile, has flashed an ability to get over the tops of defenses, something that Nelson has done very well in the NFL.

The 2015 salary cap could work against Cobb and Nelson. With $114,262,013 already partitioned for 2015, just seven teams have committed more money towards next year's salary cap. The Packers will have some room to maneuver under a projected $140 million ceiling, but they also have to worry about re-signing B.J. Raji and Bryan Bulaga along with their two star wideouts. 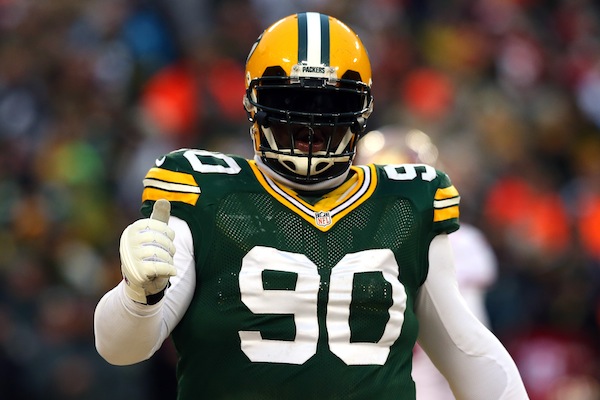 B.J. Raji is another member of the Packers who will be looking for a new contract after this season, Photo credit: Ronald Martinez

The best thing that Cobb and Nelson could do for themselves is have big seasons in 2014. The Packers have shown a lot of loyalty to their best weapons over the years, giving Jermichael Finley a two-year, $14 million in 2012 and making Donald Driver a franchise legend over the course of 14 seasons. They also have no problem letting go of players at the margin -- see: Jones, James -- or those who aren't meshing well (such as Greg Jennings).

Attitude isn't a problem for either Cobb or Nelson, with their quietist stances towards their contracts being an example. However, increased competition on the depth chart offers the potential for them to be marginalized. The Packers have a lot of young talent to take care of, with not much money stored in the coffers. Cobb and Nelson may need take advantage of every opportunity they have this season to prove they deserve to stay in Green Bay long term.