Dwayne Bowe wants to be No. 1 again

Kansas City's big-name receiver failed to live up to the hype, and his $56 million contract, in 2013. That has to change in 2014 if the Chiefs are going to keep him around for the long haul.

Share All sharing options for: Dwayne Bowe wants to be No. 1 again

The Kansas City Chiefs rebounded from a 2-14 record in 2012 to an 11-5 mark and a playoff berth in 2013. In other words, few underachieved on a team that exceeded most expectations. Still, one big name stands out as disappointing: Dwayne Bowe.

The former 2007 first-round pick out of LSU struggled to justify the massive contract he signed in the offseason for five years and $56 million. Bowe was very slow out of the gate in Andy Reid's West Coast offense, and ended the year with only 57 catches for 673 yards and five touchdowns.

Now, entering the second year of his eye-popping deal and a full grasp (supposedly) of Reid's offense, Bowe is under the gun to become the dominant force he once was. 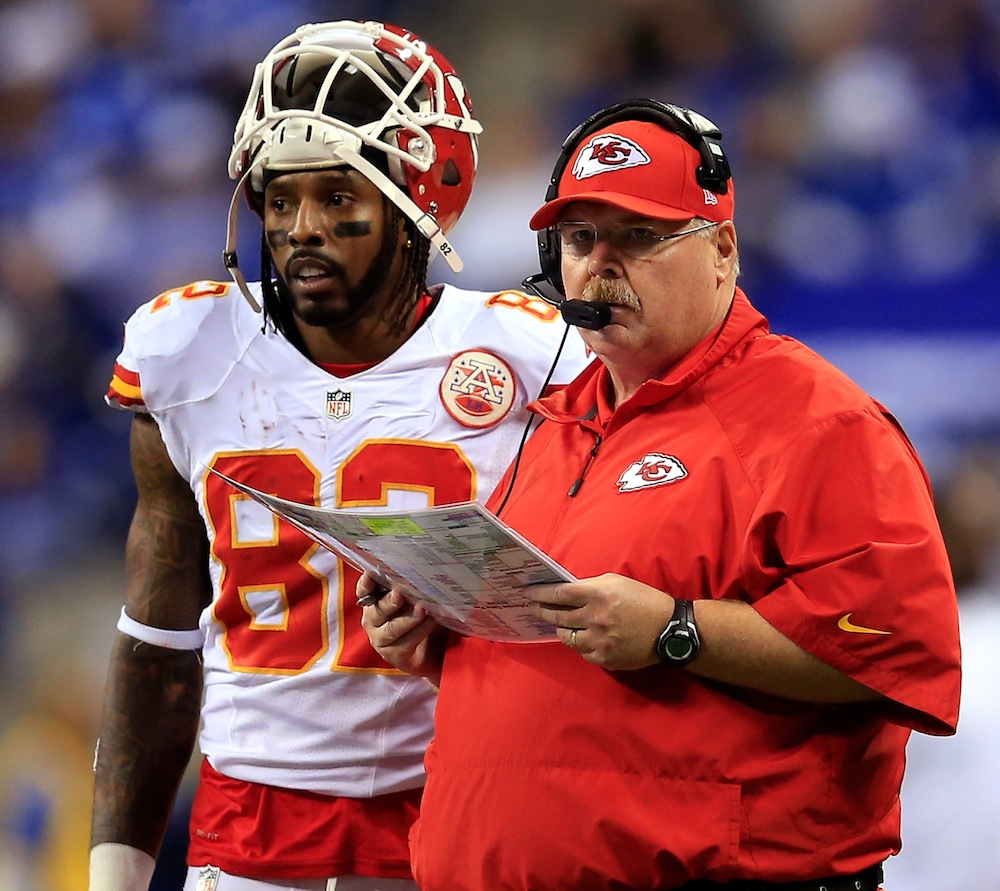 Bowe burst onto the scene as a rookie in 2007, going for 995 yards despite having Damon Huard as his quarterback. In 2008, Bowe eclipsed the 1,000-yard mark for the first time, amassing 1,022 with seven touchdowns. After a poor 2009 campaign with just 589 yards in his first year teamed up with Matt Cassel, the duo exploded in 2010.

Bowe needs to produce before he becomes a cap casualty

That season, Bowe posted career-bests for yardage (1,162) and touchdowns (15) to make his first Pro Bowl team. The following year, Bowe had only three fewer yards and five scores, playing with Cassel and Kyle Orton. The wheels fell off for Bowe and the Chiefs in 2012, with Bowe getting suspended for a violation of the league's drug policy. Playing in only 13 games, Bowe had 801 yards and three touchdowns.

Still, new general manager John Dorsey inked Bowe to the $56 million deal. Without him, Kansas City would have no threat on the outside and despite his down season, Bowe remained a legitimate No. 1 receiving option. However, the veteran receiver took ample time to get in rhythm with new quarterback Alex Smith, posting only 673 yards.

In 2015, Bowe has a cap hit of $14 million, with $10.5M in dead money should the Chiefs decide to part ways before June 1. However, if he becomes a post-June 1 cut, the team would save a whopping $9.5M. With those numbers, Bowe needs to produce before he becomes a cap casualty.

If Bowe does make it through 2015, he is scheduled to make $13M with only $6M in dead money in 2016, another time when Dorsey could cut bait should he choose to do it. Another factor in how long Bowe sticks around revolves around his behavior off-the-field.

The official story is that the Kansas City Chiefs receiver was holding and speeding en route to Sonic. But the full story is not yet known.

Last November, Bowe was arrested for possession of marijuana when pulled over by police for speeding in the Kansas City area. The receiver was not disciplined by the NFL for the arrest. Bowe was on his way to Sonic when he was stopped, making the story even more ridiculous.

Dorsey showed faith in Bowe by not drafting a wide receiver, something that Kansas City was universally expected to do in the first round. Still, this remains a key year for Bowe. The 29-year-old is in the prime of his career and remains the top target for Smith of the receiver group. Outside of megastar Jamaal Charles, Bowe is the epicenter of the Chiefs offense.

When Todd Haley first arrived to Kansas City in 2009, he demoted Bowe to third-string until he learned how to block. At first, Bowe scoffed at the notion before accepting his flaws and working at it. Currently, Bowe is one of the best blocking receivers in the league. Faced with adversity and horrendous quarterbacks most of his career, Bowe has come back strong after disappointments.

Bowe was better down the stretch in 2013 than he was at the beginning of the campaign, lending credence to the idea that he was becoming comfortable in Reid's system as the year progressed. Over the first eight games, Bowe had 26 catches for 292 yards.

Over the last seven -- Bowe sat out the final regular season game with most of the other starters -- Bowe accumulated 31 receptions for 381 yards. In the Chiefs playoff game against the Indianapolis Colts, Bowe went for eight catches, 150 yards and a touchdown.

The talent is there and the system is now firmly at place. A quarterback with legitimate ability is throwing to him for a second consecutive year. A bounce back is certainly possible, and necessary if Bowe wants to be considered worth the money he's being paid.