The Cardinals will look to a few young players to bolster their run game, passsing offense, linebacker corps and offensive line in 2014.

Share All sharing options for: 7 young Cardinals set to soar in 2014

Below, for the Arizona Cardinals, I break it down by "who" the player is, "where" he plays, "why" he'll potentially play a key role in 2014, and "how" he'll succeed in that.

Who: Cooper was Arizona's first-round pick in 2013 -- seventh overall -- and was one of the highest-selected guards in recent memory (highest since 1986, actually). He was expected to make a huge contribution in the starting lineup his rookie year but a broken leg in the third week of the preseason de-railed that notion.

Why: Carson Palmer had a 40.9 QB rating when he was pressured in 2013, per ProFootballFocus, taking 41 sacks and throwing 15 picks to only three touchdowns. Almost all quarterbacks are worse under pressure than when they're sitting pretty in a clean pocket, but Palmer's numbers when he's getting bull-rushed or chased down from the outside are pretty atrocious. Cooper's addition to the offensive line (along with top free agent Jared Veldheer next to him) should, assuming he's healthy, really help clean up Palmer's blind side and we could see a drastically improved passing game. Or, at least, we may see a less interception-prone passing game. 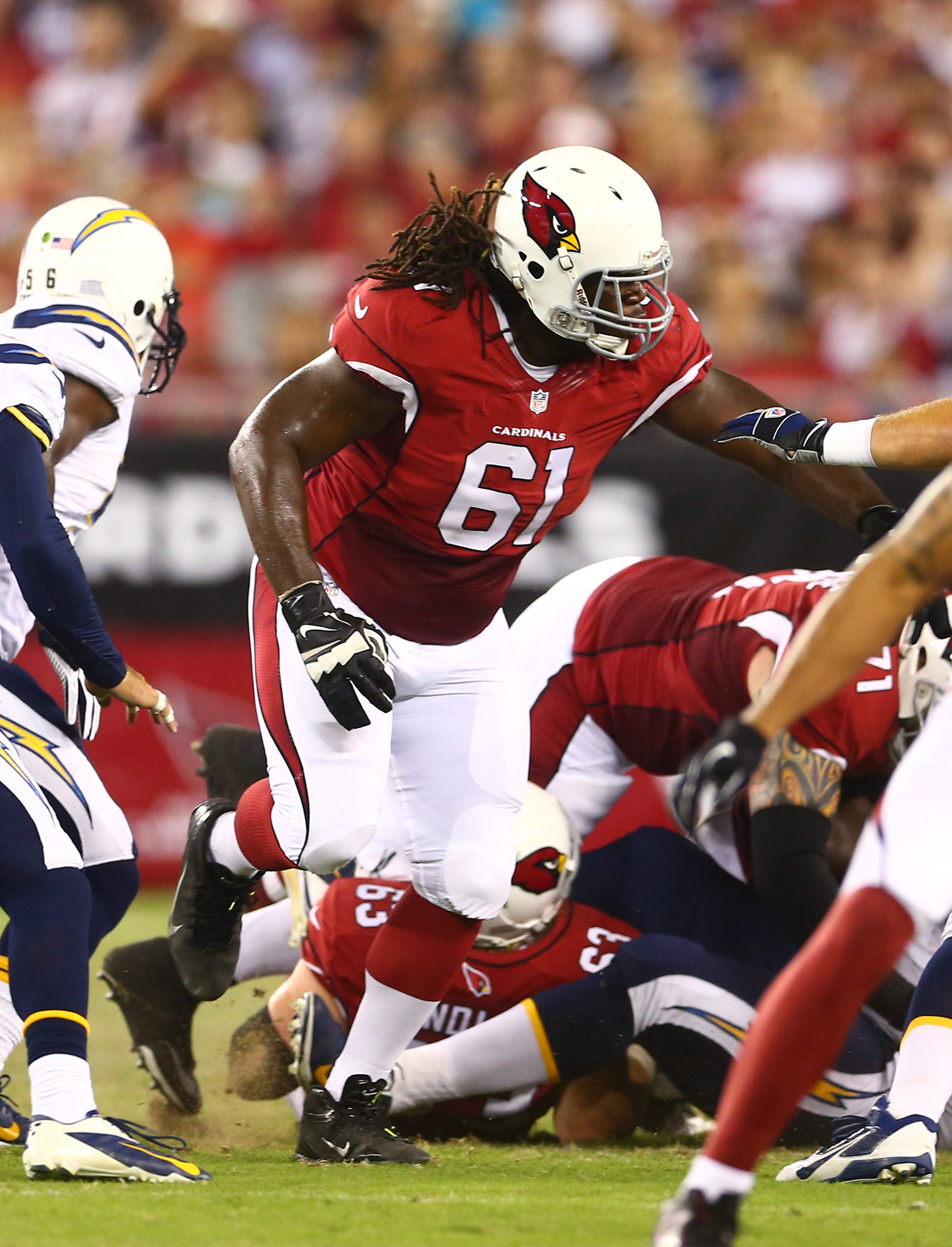 Additionally, Cooper's blend of power and athleticism should make him a big factor in the run game.

How: Stay healthy. Show an ability to pick up stunts and twists while manhandling defensive tackles lined up across from him. Play nasty in the run game.

Who: Minter was the 45th overall pick in the 2013 NFL Draft out of LSU. He was All-SEC his final year as a Tiger, was a team captain, and racked up 130 tackles on his way to a Butkus Award nomination. He played mostly on special teams his rookie season for Arizona.

Why: Arizona lost their two all-world inside linebackers during the offseason -- Karlos Dansby to free agency, and Daryl Washington to suspension. This throws Minter directly into the fire and the Cardinals will surely be hoping for big things from their sophomore inside linebacker. Arizona had one of the best defenses in the NFL in 2013 and a lot of their strength was in their front-seven. Losing Dansby and Washington is a blow, but Minter has the talent to make up for those casualties. 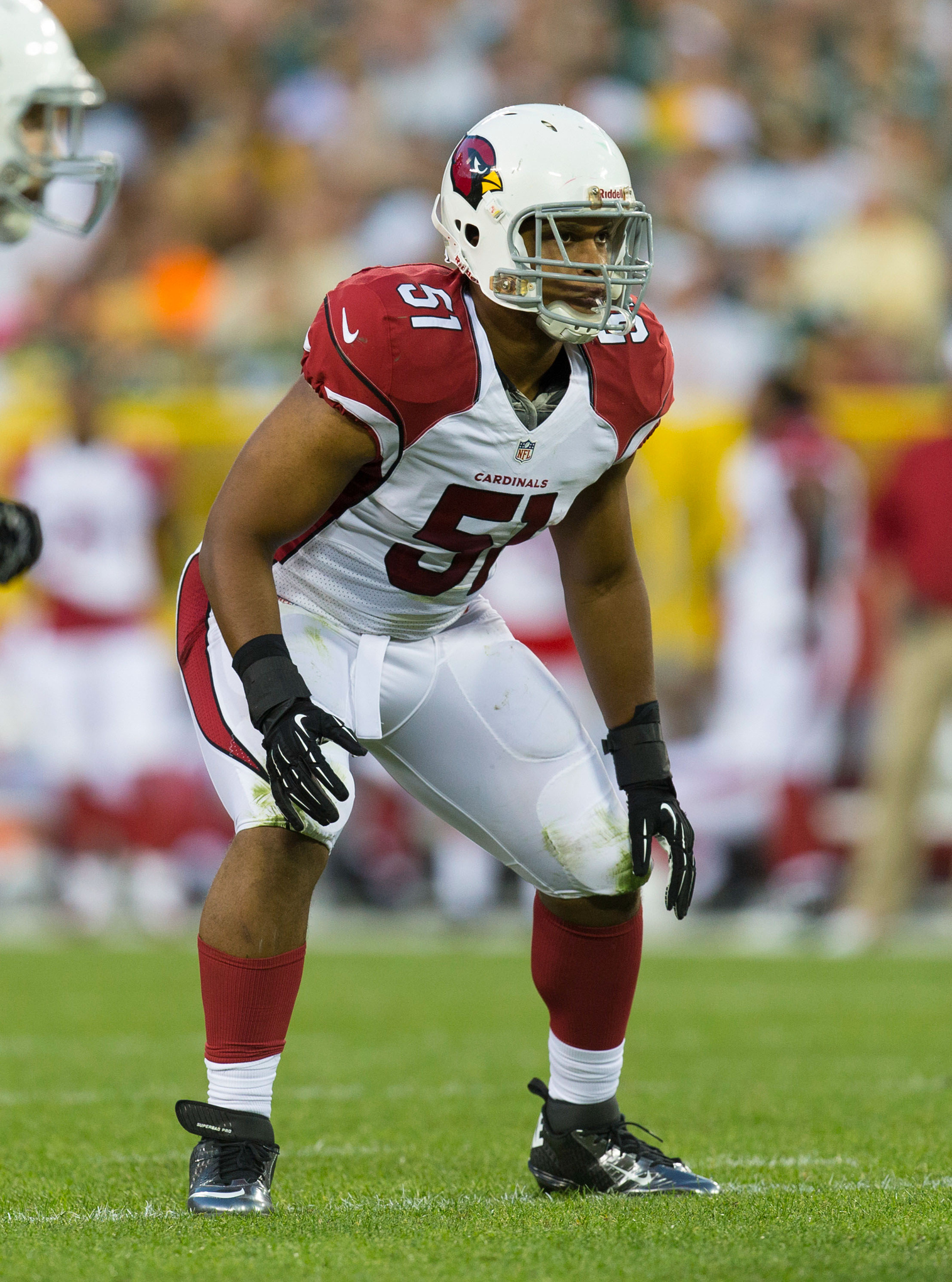 How: Study tape on his predecessors, play sound football, anticipate and react, and hit like a freight train. It's not going to be easy, especially in the smash-mouth NFC West.

"This is his time," head coach Bruce Arians has said of Minter. "He's matured. He's got a year under his belt to see how things work. He's very fortunate as a rookie he didn't get thrown into the fire and fail, which he probably would have last year. But he got to sit and play behind an outstanding preparation guy and a great leader in Karlos. He knows what to do now and he (had) a fantastic camp."

Who: Floyd was Arizona's first-round pick in 2012, 13th overall. He's already had two nice seasons for the Cardinals, including over 1000 yards receiving last year, and is still on the upward trend. The reason Floyd makes this list is not that he is due for a breakout year -- that probably already happened in 2013 -- but that he could find himself shooting into the group those considered elite at the position in 2014. He's that talented.

Where: Split-end, flanker. Even sometimes in the slot.

Why: Larry Fitzgerald is an excellent diversion for opposing defensive secondaries, which will leave Floyd to a good amount of one-on-ones without safety help over the top. Floyd has the combination of size, speed, body control, and hand-eye-coordination to make him a potential #1 type of receiver, and even though he won't need to play that role when he's opposite Fitz, the Cardinals can use that skill-set nonetheless. Fitz and Floyd have the potential to be one of the top receiver-duos in the NFL in 2014. 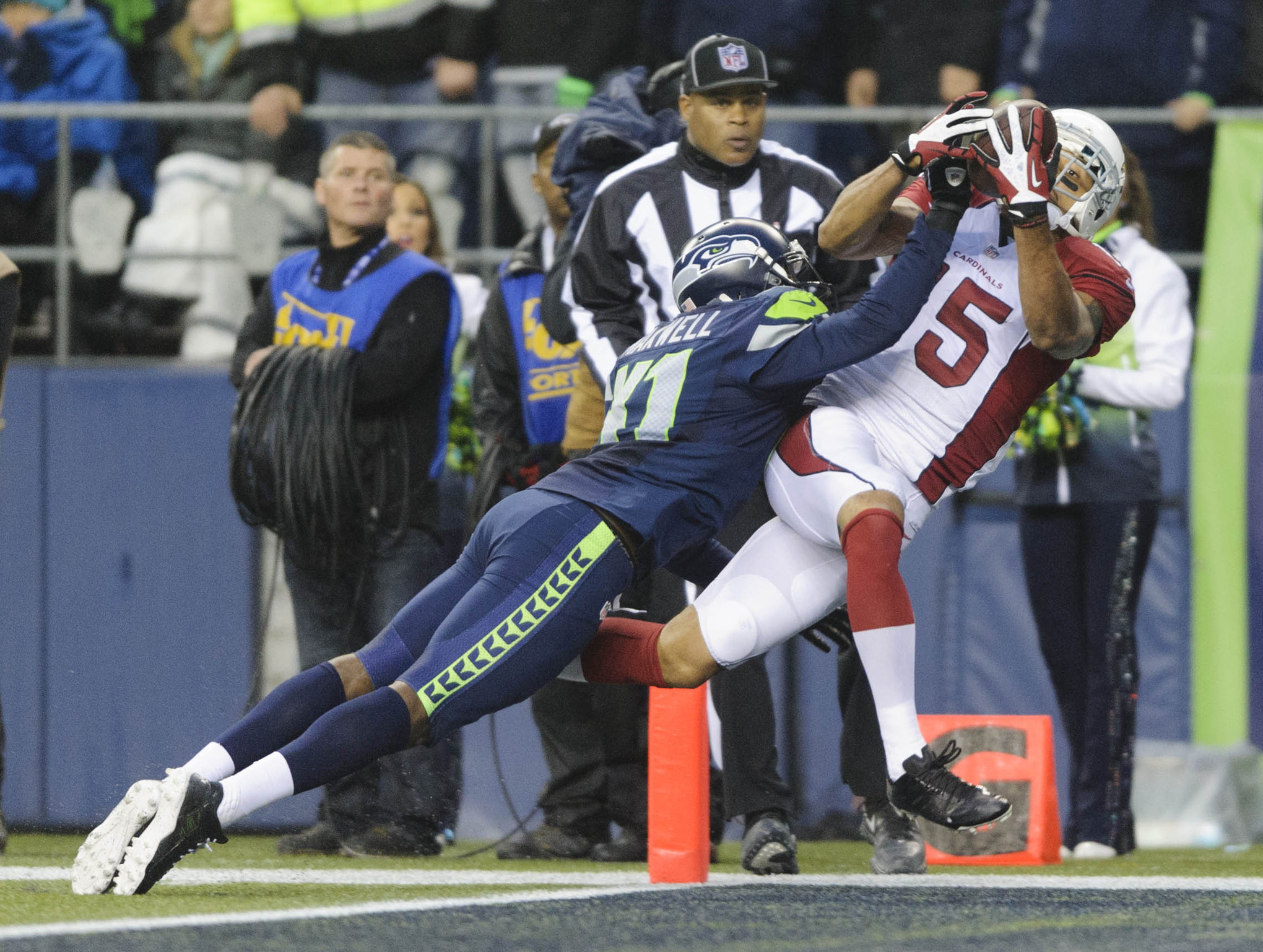 How: Use his size to box out, highpoint the football. Catch the ball reliably. Get YAC. Present a huge target. Find open spots in the zone. Take pressure off of Fitz and Carson Palmer. Keep doing what he's doing.

Who: Ellington was a surprise sixth-rounder in 2013, selected 187th overall by the Cardinals. He was a top running back at Clemson but there were questions about his long-speed and size coming out, which caused him to fall further than expected.

Where: Ellington is projected to be the Cardinals feature back, getting up to 25-30 touches per game. He's highly effective as a pass catcher in addition to a runner, so some of these touches will be through the air. 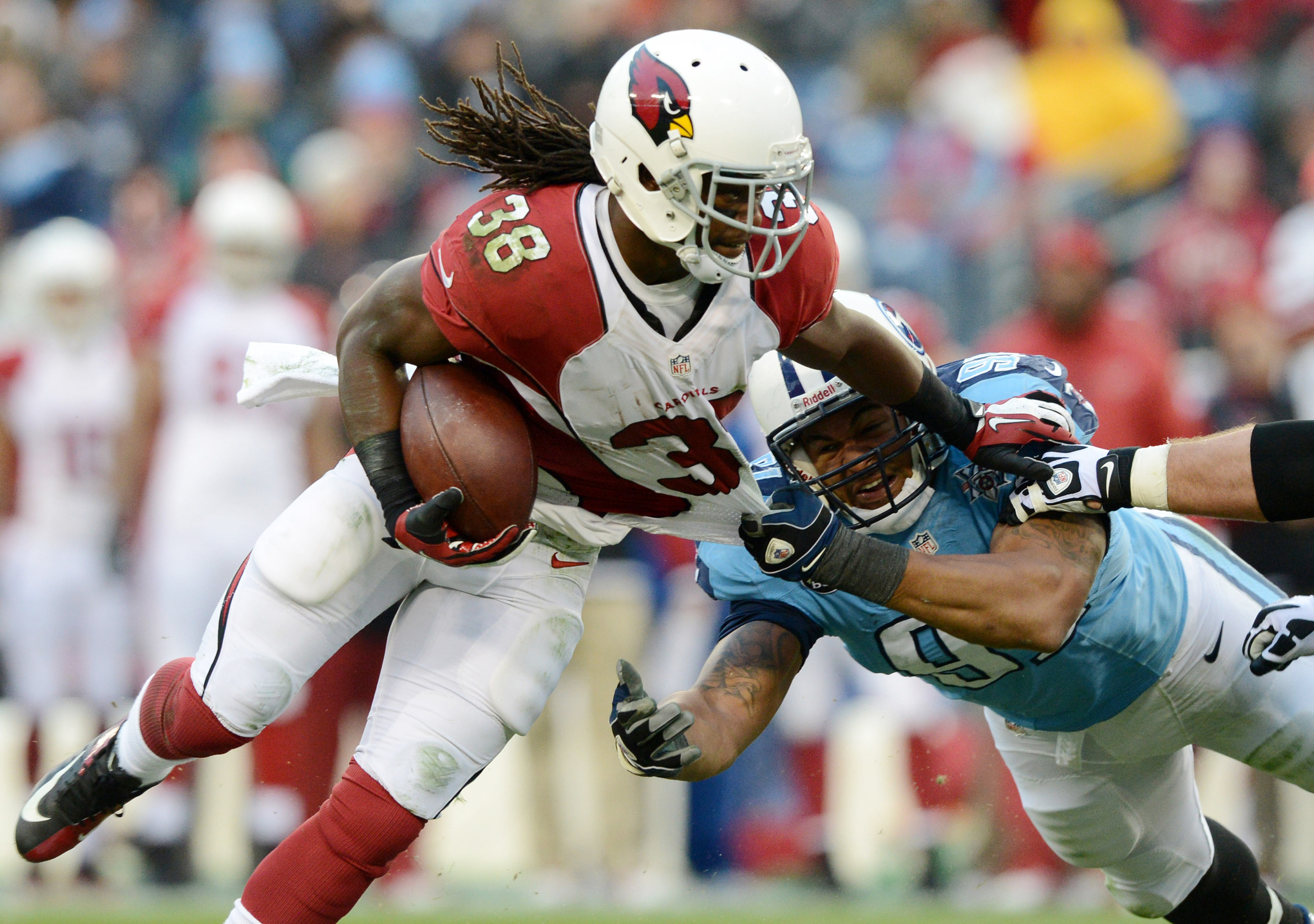 Why: Like Floyd, Ellington already had a 'breakout' season of sorts his rookie year, rushing for 652 yards on 118 carries and adding 39 receptions for 371 yards. He's very elusive in space and sets up his blocks and works off of them very well. He's not a power runner, but has excellent balance and vision, and can make defenses pay with his short-area burst.

Who: The Cardinals' 2013 fifth round draft pick out of Stanford. Taylor was a prolific runner for the Cardinal, racking up over 4,300 yards and 40 touchdowns in four seasons.

Where: Backup running back; he's more of a sustaining, between the tackles runner. 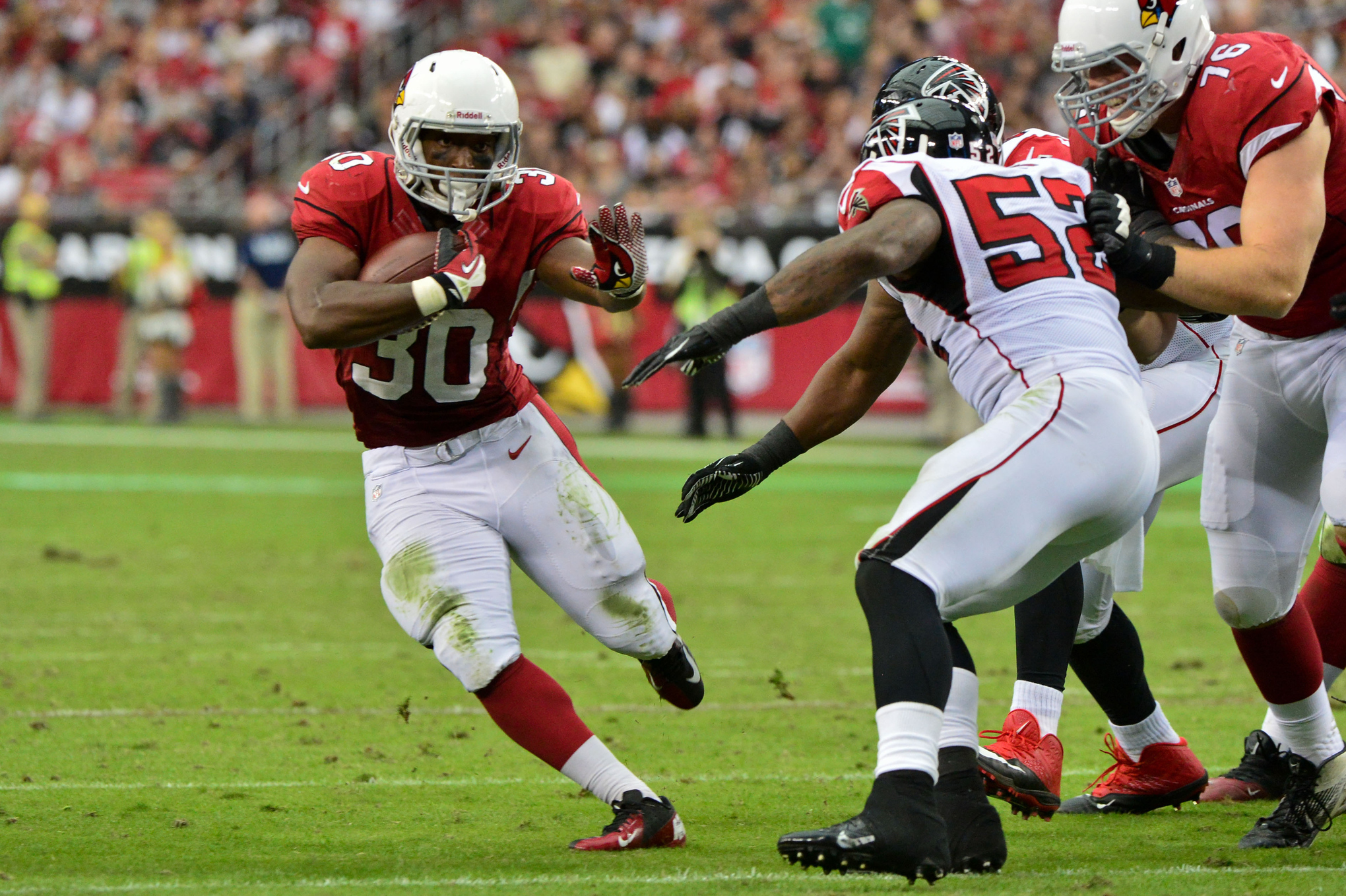 Why: With the departure of Ryan Williams and the retirement of Rashard Mendenhall, Taylor becomes the de facto next man up for the Cardinals to back up Andre Ellington. Taylor is much more of a straight-line bruiser than Ellington, and could be in line for some 'hard' carries while Arizona protects a lead or looks to run the clock down late in the half or end of the game. He'll have to improve on his 3.2 YPC from his rookie season, of course, but having some better horses up front should help that a lot.

How: Ball security. Power, picking up tough yards. He came from a smash-mouth power run game at Stanford and I'm guessing that's the identity that the Cardinals' brass wants him to bring to the desert.

Who: A fourth-round pick by the Cardinals in 2012 out of James Madison University. Was a backup in his rookie season.

Why: Incumbent Paul Fanaika left something to be desired in 2013 at the right guard spot according to ProFootballFocus' grading (a -14.4 grade in both pass and run blocking), and the team likes the potential Watford brings. Apparently it's a neck-and-neck battle for the job right now, which you'd expect this early in the offseason. As stated above with regards to Jonathan Cooper though, improved offensive line play seems like a major point of emphasis for the Cardinals this season and upgrading what Fanaika did last year - either by coaching him up or replacing him - is a priority. 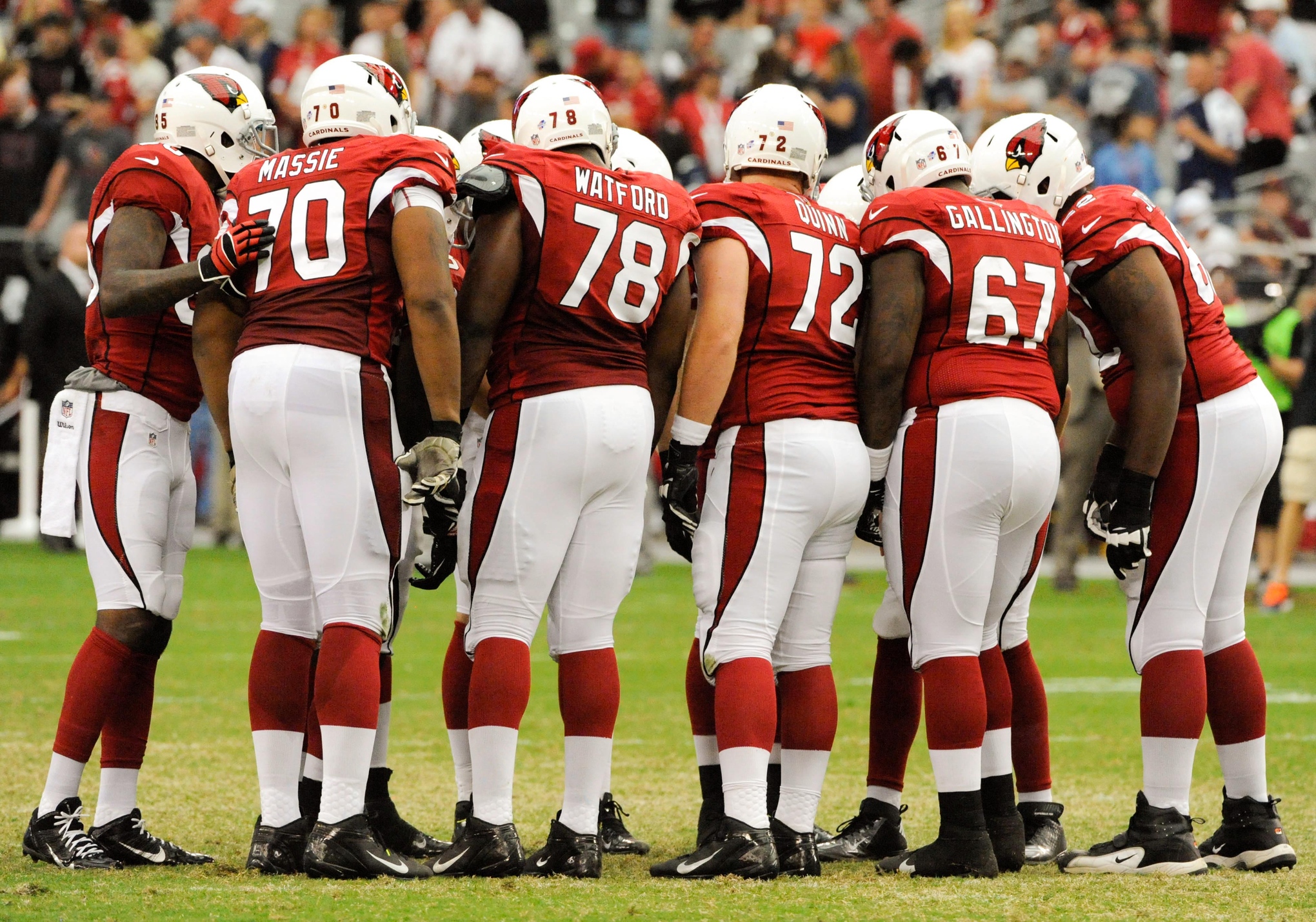 How: Simply put, by displaying better consistency and better efficiency than the guy he's competing with.

Who: Massie was a fourth-round pick by the Cardinals out of Mississippi State in 2012. He started 16 games his rookie season but only appeared in 8 games in 2013. He has enormous physical upside, but has been dogged by mental mistakes thus far.

Where: In a battle for the starting right tackle job. 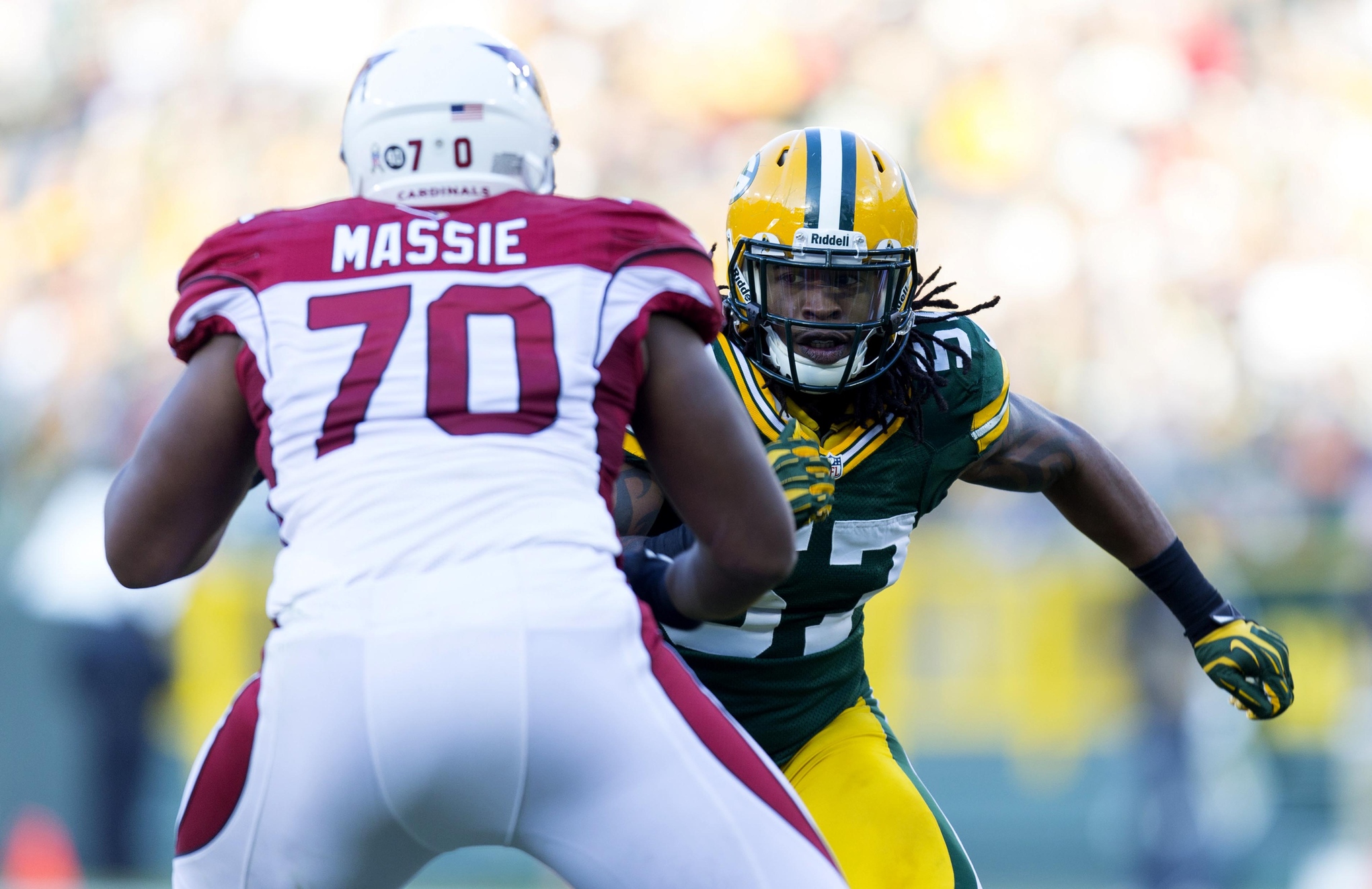 Why: Eric Winston started at the right tackle spot last year, but he's now gone and the team likes Massie's upside. He's thus far taken starting reps in minicamp and OTAs, so it's looking good for him thus far. QB Carson Palmer, who really has the most at stake when it comes to the performance of the right tackle, gave him a vote of confidence recently.

How: Cut out the mental errors, play sound football. Consistency, poise, and aggressiveness.