Eric Dickerson cannot teach you how to run the ball like he does. He doesn't even try to in this '80s instructional video. He just covers that checklist of the little things: holding the ball, carrying it, taking a pitch, so on. Anyway, none of that stuff is what you remember about Dickerson.

Dickerson never looked like a high school kid steamrolling opponents with the Sealy Tigers. At SMU, the most prized recruit in the nation refined his ability, and then he mastered it in the NFL, posting a series of statistical achievements unlikely to be topped, ever. He ran with uncommon artistry, leveraging every bit of talent coded into his DNA with everything else in his being. But do jot down a few of his pointers on the fundamentals. After all, it's not often that Picasso teaches a VHS correspondence course on painting.

Dickerson's natural ability and the ease with which he ran over, around and through defenses confused his first NFL coach.

John Robinson, the Los Angeles Rams head coach from 1983 through 1991, knew Dickerson from the high school running back's recruiting days. Robinson was at USC then, giving Dickerson the low-pressure approach. He finally had Dickerson on his team in the spring of 1983 -- thanks to Dickerson's grandmother suggesting he go to the NFL instead of the USFL -- and he found himself confused by what he saw from that year's second overall pick.

The image most people have of a 6'3, 220-pound running back is just a faster version of a fullback, a giant running through would-be tacklers. Dickerson powered through the trenches too, but it wasn't that trait that made him special.

"He was so smooth," Robinson said. "That's the thing that surprised me. If you were blind, he could run right by you, and I don't think you'd know he was there unless you felt the wind. He's unique in that way. He is an extremely powerful runner, but he's so graceful it's really deceiving. He's the smoothest runner I've ever seen."

No. 5 on Dickerson's list of fundamentals: following your blockers. With a knowing smirk, Dickerson admits to outrunning his blockers. He can smirk about it because of his rare vision. Dickerson found cutback lanes that didn't exist when he headed that direction. It's how he turned 3 yards into 8, 10 yards into 30, and kept running faster and further than even his coaches believed he could.

Unsurprisingly, all of that added up to some gaudy stats.

As a rookie in 1983, Dickerson gave a Rams team on the fast track to irrelevancy 18 touchdowns and 1,808 rushing yards, both records for a first-year player. The Rams went from two wins the year before to 9-7 and a wild-card spot in the playoffs. Since 1993, Dickerson's last year in the NFL, only 11 players have topped 1,808 rushing yards in a single season; it has happened a dozen times in two decades.

Dickerson's defining season came a year later when he ran for 2,105 yards, still the single-season rushing record. Through four seasons and part of a fifth, Dickerson gave the Rams 7,245 rushing yards and 56 touchdowns. His numbers with the Colts don't stand out as much, but he still managed to rush for 5,194 yards over parts of five seasons there.

So listen to Dickerson when he tells you how to hold on to the football. It's good advice, unless you can run like he did, which of course you can't. Dickerson fumbled the ball 13 times in his 1983 rookie season and 14 times the year after that. Turnover numbers like that might have gotten a lesser player benched, even the second overall pick in the draft, but a baker's dozen of fumbles is a small price to pay on your way to writing your name into the record book with permanent ink.

There are only so many ways to move a football down a field. The most efficient of them is throwing the ball. Los Angeles picked Dickerson second. John Elway went first. The NFL of the 1980s was becoming a quarterback-driven league, evolving into the game we know today. Dickerson was the kind of special talent who could carry a team. The Rams knew that, and opted to make him the centerpiece of their offense in the early 1980s.

After a move to Orange County, the end of the Fearsome Foursome '70s, and two forgettable seasons in 1981 and 1982, the Rams with Dickerson were relevant again, making the playoffs in each of his first four seasons there.

Unfortunately, stardom in the 1980s NFL came with a hefty cost on and off the field.

High school yearbook photos and NFL uniforms make everyone look anonymous. Not Dickerson. A tight Jheri curl, dark aviator sunglasses and a thin mustache that most high school kids couldn't get away with, even in 1979, jump off the upper right corner of the page. Dickerson radiated badassery; there was destiny in that Jheri curl.

The way Dickerson ran made him more than an anonymous blob of nylon and cotton. His back always stayed so straight without being stiff. He levitated into running lanes as if tethered to some divine joystick. The arms of would-be tacklers flopped off him while he moved. 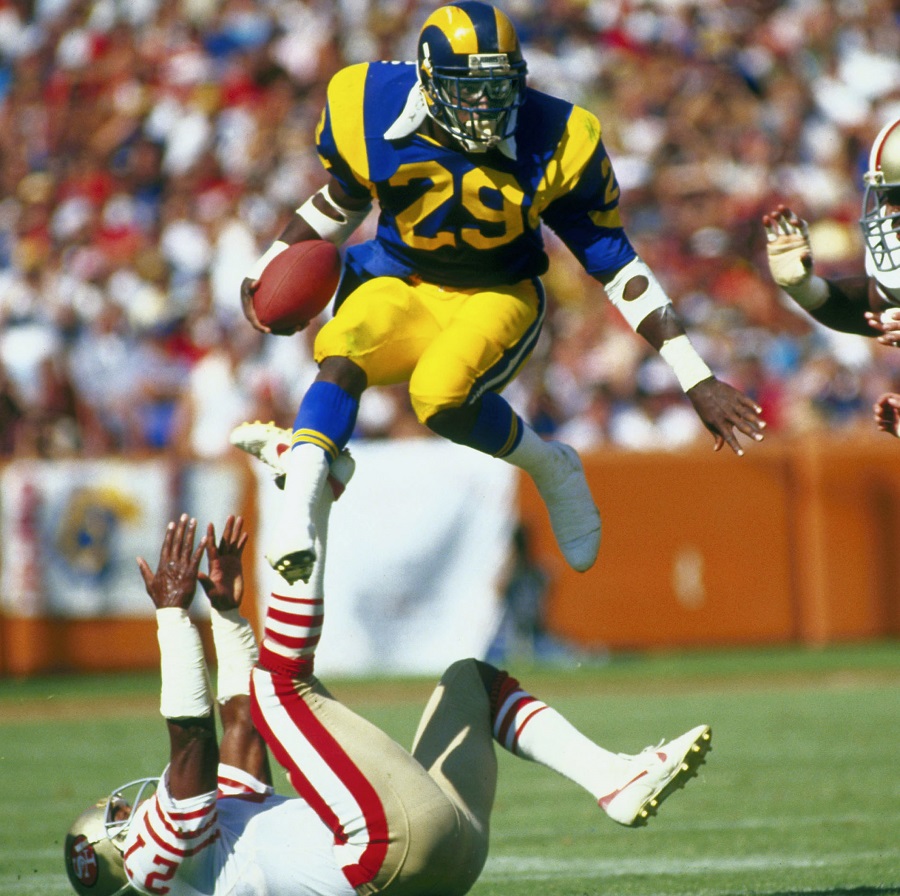 A neck roll and shoulder pads jutting wide on both sides gave him the shape of a cobra in attack mode, and made him that much more intimidating to opponents. The style was there too. His Jheri curl was longer then, poking out from the back of his helmet.

Then came the pièce de résistance: Rec Specs. Between Dickerson and the Lakers, LA became an international hub for practical, yet fashionable sports eyewear in the 1980s. But the deceptively swagger-ish goggles seemed somehow cooler on Dickerson than Kareem and Co.

This owes less to the Rec Specs than to Dickerson. He had the attitude to match the look, to somehow make swaddling himself in protective equipment seem cool. We're used to a certain casual aloofness among players today. Dickerson set that prototype for the modern NFL superstar.

Controversy provided both the boundaries and definition of Dickerson's professional career. He started playing the year after the 1982 players' strike. A shorter strike interrupted his fifth season in 1987. That strike set the wheels in motion for the current era of salary caps and free agency, but Dickerson would be out of the league before players earned the right to keep a portion of the earnings they created for owners.

Nobody ran the ball better than Eric Dickerson. He knew that. He also understood the physical price exacted on a player's body. The year after his 2,105-yard season, Dickerson asked for compensation commensurate with those twin facts. A 47-day holdout bled two games into the season.

Robinson went to the press and likened it to blackmail.

He never got the deal he wanted from the Rams, and they shipped him off to the Colts two years later in a massive swap that included 10 players, draft picks and the Buffalo Bills (not the team, just some players on it). Contract squabbles, more than rushing yards, marked his time in Indianapolis.

Rams fans derisively threw Monopoly money at Dickerson after a Colts game in Los Angeles. It wasn't his first run-in with critical fans, and he never shied away from responding.

"... But people are spoiled here. I had two great seasons, and now they expect another 2,000 yards," Dickerson told Sports Illustrated at the end of his disappointing third season. "But things change. I mean, there were times that if you were out there on the field, you wouldn't find a place to run for about a month."

"Let your banker run with it," said a Denver fan who derisively offered him a $20 bill after a 35-yard performance in a 1989 loss.

Even Jim Brown, who quit football for acting rather than report to camp at Art Modell's insistence, questioned Dickerson's heart.

Somehow Dickerson was always the bad guy for wanting more money, never bean counters like John Shaw or cash-grabbing owners like Georgia Frontiere or the Irsays. Weirder still was that all this happened in the 1980s, when America made overt materialism something like its national religion.

Overcoming odds, individual achievement for the greater good ... sports are the perfect canvas for perpetuating our national mythology, and sports fans are fed a diet heavy on Horatio Alger-style fables, even as the broader culture's priorities move in a very different direction. Maybe that's what makes it hard for fans to accept a player asking for more money, then using a contract holdout -- the only real leverage an individual NFL player has -- to get it.

Dickerson didn't give a damn what anyone else thought about any of that, not outwardly at least. His insistence on getting paid what he was worth defined his career every bit as much as the talent that made him worth so much. Unfairly, Dickerson became the prototype for the spoiled superstar who keeps networks humming 'round the clock with televised shouting matches.

Dickerson doesn't try to teach anyone how to run the ball like he does in that video. It can't be done, so focus on the pointers instead. But Dickerson left one repeatable lesson: the part about fierce determination. Jeers and projectiles from the stands were no more effective at keeping him from his goal than arm tackles from confused linebackers. Dickerson ran to daylight on the field and off. What's more American than that? 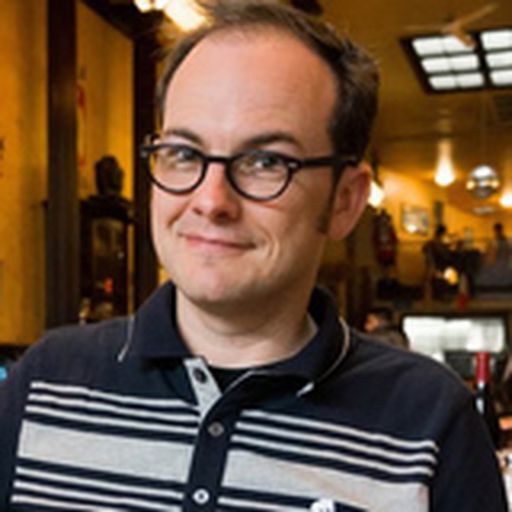 Ryan is a person.