The NFL formally announced that Baltimore Ravens running back Ray Rice has been suspended two games for conduct detrimental to the league stemming from his February arrest. Rice will not be paid during his suspension, which begins on Aug. 30. The Ravens running back will be eligible to participate in all of training camp and can play in all exhibition games, and will be eligible to return to team activities on Sept. 12. He will also be fined an additional $58,000.

He will have three days to appeal the league's ruling.

The NFL released an official statement on Thursday afternoon that acknowledged the decision and included a letter from commissioner Roger Goodell sent to Rice: 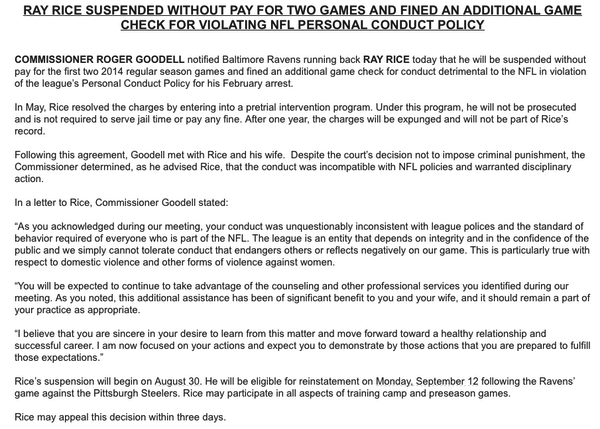 Goodell states that Rice's actions went against league policy and that the NFL depends on integrity. He also expressed that Rice will be expected to continue counseling and that he believes Rice is sincere in his desire to learn from the situation.

Ray Rice is reinstated to NFL after winning appeal